Reflecting on the 2020 London Marathon 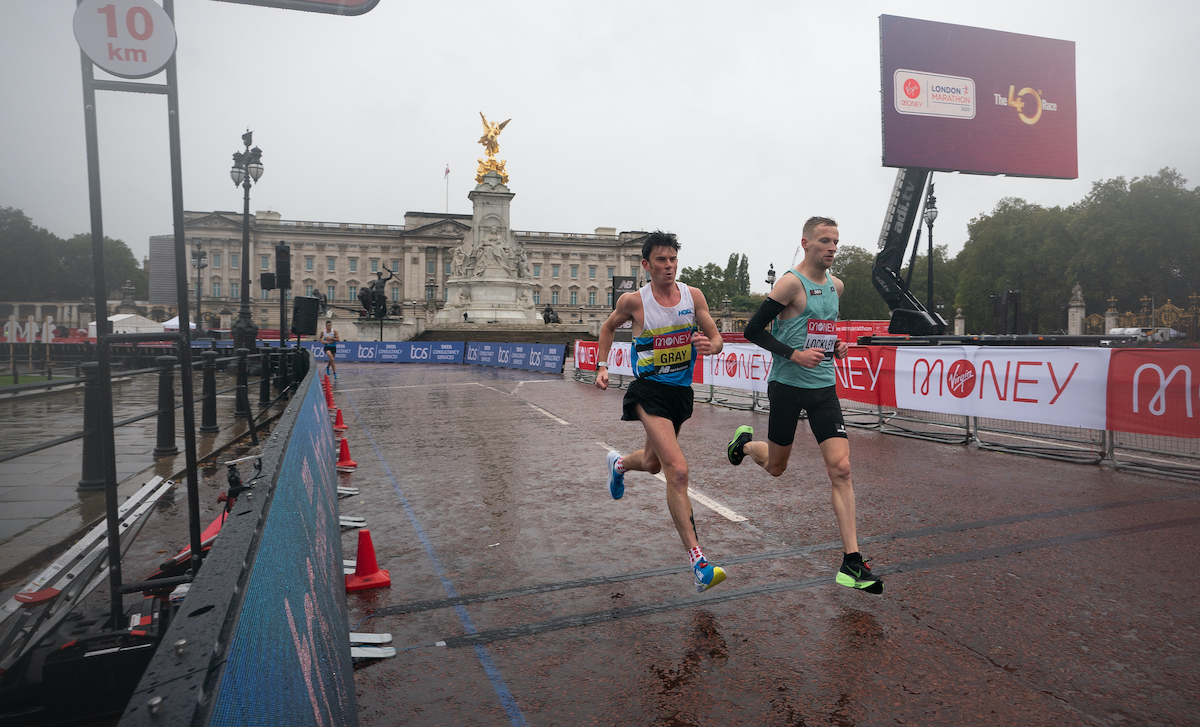 Good Ollie Lockley blogs are like buses, you wait a short while but then two excellent ones come along at once. The Isle of Man athlete talks us though his London Marathon experience.

Due to the COVID-19 pandemic I had only raced twice in 2020, so like most athletes going into the race it was hard to gauge a sense of specific fitness.

I had planned to do the Antrim Coast Half Marathon a few weeks out from London, but I was unable to do so due to the Isle of Man’s regulations which require people to isolate for 14 days upon arrival back to the Island. This would have been a perfect opportunity to run a fast half and get the legs moving a bit quicker, but unfortunately it wasn’t meant to be.

There was about 8-10 weeks of solid marathon training, with weekly mileage reaching 120 miles, and sessions accumulating to 24 miles in volume. I’d be lying if I said I didn’t have a few setbacks in my buildup, but on the whole, training went well and I felt ready and eager to toe the line in London.

Once I landed at London City Airport I was picked up and taken to the London Marathon hotel, situated in a TOP SECRET location!

What should have been a 30 minute drive turned into 2 hours thanks to the infamous London rush hour. Once we finally arrived at the hotel I was instructed to go for a COVID test, and was then informed on the protocol regarding the following few days ahead.

All athletes, event staff and security had to wear face masks and a ‘Bump’ device at all times, bar a couple of exceptions. The only times we were able to be free of the mask and the ‘Bump’ was when we were in our own room, running, and eating meals in the dinning area – however we still had to maintain a 2 meter distance.

All athletes had access to the grounds around the hotel to use for walking or running, however it seemed like the whole time we were at the hotel it was torrential rain and strong winds – so these runs were not pleasant.

The big day itself

The race itself was held on a 2.15km loop around St. James’ Park, and finished in the same iconic location as the traditional London Marathon – along The Mall.

As forecasted, the weather was appalling with persistent wind, rain and cold temperates, reaching a maximum of 9 degrees – lovely. I naively thought these conditions would be conducive to running fast times, but as time would tell I was very wrong.

The race had three/four paced groups with the slowest being the Olympic qualifying group (2:11:30) paced by Matt Clowes and Mo Farah. I decided not to go with this group but to run my own paced race with Jack Gray at around 2:13/2:14 tempo. I thought going off at this pace was sensible and if we felt good there was scope to pick the pace up in the latter stages. Ollie and Jack Gray stick to their own pace early on, agonisingly close to the assistance of the the pace group. Photo: Jon Super for Virgin Money London Marathon

Once the gun went off, we got into our running and it was very comfortable and we dialled into the pace. However, once we hit the 8-mile mark I felt a sharp pain in my hamstring, as though someone had shot me with a paint ball. Rarely having issues during a race this took me by surprise.

Trying to ignore the pain and push through it I pushed on, but it was to only get worse.

At 20-miles still on for the 2:14 pace, my body was having none of it. I began to slow dramatically, finishing in a time of 2:19:40. As soon I finished, all I wanted to do was to get warm, but once I’d stopped running, I found that I could barely walk without the aid of someone helping me.

I got to the tent and couldn’t even bend down to take my shoes off due to the pain in my hamstring. However, concerns quickly turned to the fear of missing my flight due to the tight turn around (and the fact that I was now operating on one leg). Luckily I hopped to it and did make the flight with a bit of wiggle room to spare.

Reflecting on a big experience

After some ruminating, I feel somewhat disappointed with my result – particularly because the time does not reflect how training went.

Regardless of this, it was tough out there! Stepping back a little, as an outsider looking in, I take pride in knowing that I did everything I could to give myself the best chance of performing on the day. Unfortunately there are some things we simply cannot control – in this instance: the weather and how my body held up in the conditions.

I can however take a lot from this, and learn from my weaknesses. It wasn’t all doom and gloom either – there were many positives to running through the pain, and ultimately finishing the race, including achievement of a Commonwealth Games standard and breaking an Island-Record, which has stood since 1974!

Yes, the time wasn’t what I wanted, but with lessons learnt, and more experiences to benefit from, I know the time will come. This race has given me a good opportunity to set my sights very clearly for Birmingham 2022, and beyond.