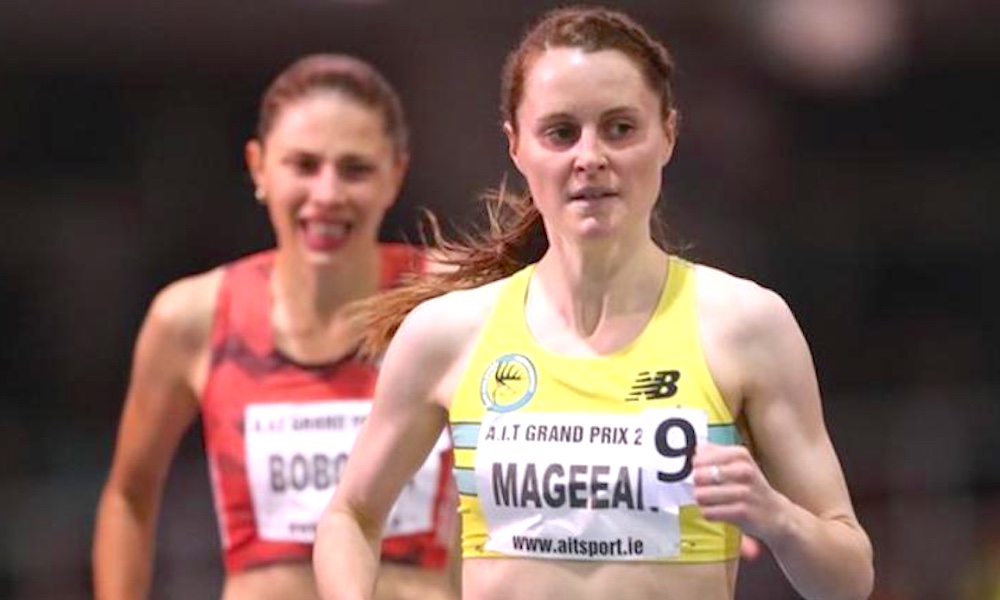 Two medals for Ireland at the European U23 Championships, a further medal at the World University Games, a personal best mile time for Ciara Mageean, and a fighting fourth for Sarah McCormack at mountain running’s World Cup round in Austria were the highlights of a busy week in Irish athletics.

In Gavle, Sweden at the European U23 Championships on Saturday (July 13), Eilish Flanagan (Carmen Runners) took silver in the 3000m steeplechase clocking a personal best time of 9:51.72, while Nadia Power of Templeogue AC won a bronze medal in a dramatic 800m after a disqualification for obstruction was overturned.

At the World University Games in Naples, Italy on Thursday (July 11), Marcus Lawler (St LOT AC) took bronze with a personal best time of 20.55 secs in the 200m.

Also in Naples, Phil Healy (Bandon AC) showed that she’s well on the way to recovery after a foot fracture when she survived heats and a semi-final to make the women’s 200m final finishing sixth in 23.44 secs. In the 100m hurdles, Sarah Lavin of UCD AC was another athlete showing renewed good form when she finished fourth in 13.28 secs.

Ciara Mageean had bagged herself a place in the “Brave Like Gabe” mile at the Monaco Diamond League meet on Friday evening (July 12).

In a stunning race, where Dutch athlete Sifan Hassan ran a world record of 4:12.33, Mageean was never out of touch and accelerated on the final lap to finish eighth in 4:19.03 – a personal best by over three seconds and the third fastest Irish time ever.

David Flynn of Clonliffe Harriers was a comfortable winner of the Irish Runner 10-Mile road race held in the Phoenix Park, Dublin on Saturday (July 13). The race was doubling as a national championships, with 1,232 finishers.

Flynn’s time of 49 mins 55 secs put him over half a minute clear of David Mansfield from Clonmel AC who finished in 50:32. Third in 50:40 was Cillian O’Leary of Raheny Shamrock, while fourth was Sean Hehir of Rathfarnham WSAF in 51.46. Finishing 17th and first M55 was Tommy Hughes of Termoneeny AC in 54:54.

First woman in 59:58 was Niamh Clifford of Star of the Laune AC in Co Kerry. Sally Forristal of St Joseph’s AC was second on 60:55 and Angela McCann of Clonmel AC third in 61.57.

Gavin Sweeney of Togher AC led home over 700 starters at the Coachford 5-Mile race in Cork on Thursday (July 11) in a time of 25 mins 5 secs. Aoife Cooke of Youghal AC was first woman in 27.52.

On the same evening, Kevin O’Leary of East Cork AC in 15:37 and Leevale’s Niamh Moore in 17.53 were the winners of the Youghal 5km. Numbers competing were affected by a bad crash at the Cobh junction from Cork.

Somba finished in 15 mins 34 secs with Andrew Nevin of Mullingar Harriers a minute behind for second in 16.35 and Sean Husband of Monaghan Town Runners third in 16:40. Ni Fhaircheallaigh finished in 19:45, with Shauna Moran of Dunshaughlin AC a close second in 19:49 and Eimear McGovern of local club St Brigid’s AC third in 20.28. Peter Somba at the Terence 5 previously.

Six seconds behind for second was Jafer Abdulshekur in 15:57, with Paddy Lyons of RTE third in 16:14. Fifth overall and first woman in 17:18 was Sorcha Nic Dhomhnaill. Second and first W40 in 20:13 was Eileen Gillick of Irish Life while a close third in 20:19 was Louise Long for Gardai.

In the over 70 category, Matt Cooley of DG Motors and Evelyn McNelis of Teachers were first man and woman. First W80 was Ann Woodlock of A Collins and Co.

At the Gas Networks 5km, organised by Cork BHAA on the same night, Anthony Mannix of Dell EMC was the winner in 15:16, with second placed Alan O’Brien of McCarthy Insurance given the same time. First woman was Joanne O’Flynn of Red Hat Ltd in 15.59.

John Travers of Donore Harriers clocked a time of 1:51.06 for 800m at the 6th Dublin Graded Track and Field meet held in Santry on Wednesday (July 10).

Stephen Gaffney of Rathfarnham WSAF AC was fastest in the mens’ 100m races with a time of 10.87 secs.

Winning a well-supported 5000m in 14:52.00 was Peter Arthur of Liffey Valley AC. Oisin Hughes of Blackrock Rock AC (Louth) and Mark Kenneally of Clonliffe Harriers finished second and third with both given an identical time of 14:55.37.

Winning the men’s javelin with 55.56m was Rory Gunning of Clonliffe Harriers.

In Austria, Sarah McCormack of Ambleside AC was lining out with well over a thousand other runners at the annual Grossglocknerlauf – a savage 12.7m climb up Austria’s highest mountain with an almost vertical climb of 900m to the finish.

McCormack finished fourth in 89 mins 21 sec, picking up valuable World Cup points. Next round (of seven) is at Snowdon on Saturday, where Irish men and women’s teams will compete.

Luke McMullan of Newcastle AC was the winner of the Leinster League hill race at Tibradden/Sliabh Brodain on Wednesday (July 12) in a time of 45 mins 26 secs for the 11.2km distance. Barry Cronin was second in 46:07 and Colm Moran of Rathfarnham WSAF AC third in 46:25.