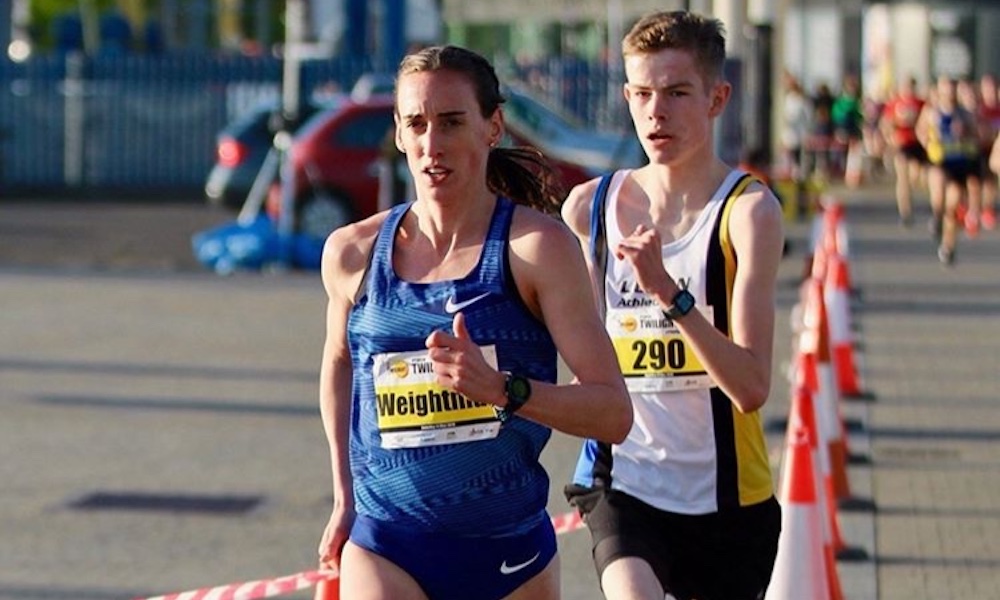 The fast and furious Ipswich 5k was just one of many races across the UK this weekend, with half marathons in Leeds and Hereford and 10ks at Rotherham, Eye, Titchmarsh, Penicuik, Ivybridge and Bideford also producing impressive times.

International stars Laura Weightman and Nick Goolab ran two of the fastest road times seen in the UK for years when taking the English 5k Championship titles in Ipswich on Saturday night (May 11).

Morpeth’s Weightman won the women’s race in a stupendous 15:22, replacing her own 4th fastest 5k by a Brit and improving that mark by three seconds.

Goolab’s winning time of 13:34 was the seventh fastest time ever recorded, with only Mo Farah bettering that mark within the last two decades!

It is great to see the Belgrave star continue to show how exciting his potential really is after a difficult time overcoming confidence issues last year.

Also excelling were Leeds City’s Claire Duck, who cut a massive 27 seconds off her PB with a superb 15:53 clocking in second, and Tonbridge’s fast improving Nicole Taylor, whose 15:58 result for third represented a huge 38 second road PB!

Leeds’ Phil Sesemann also scored a strong 13:43 PB, slicing seven seconds off his best. However, he was still a full 11 seconds behind Goolab to underline just how great the Belgrave Harriers’ run was.

The fight for third was a far closer affair, with Southend’s Adam Hickey right behind Sesemann in 13:46. Fourth and fifth went to Cambridge & Coleridge’s Jack Gray and Bedford & County’s Matt Bergin, the pair both running 13:47.

Just like the women’s race, the strength in depth at these national championships was incredible.

Meanwhile further north, the Rotherham 10k titles went to Rotherham HAC’s V45 Richard Harris in 35:09 and the City of York’s Emma Ballantyne in 38:42 on Sunday (May 12).

The second man across the line was Barnsley’s Stuart Wilson in 35:23, with his club mate Michael Grain third in 36:21.

Rotherham HAC’s Catherine Eddison was the second lady in 40:09, while Barnsley’s Christina Laking took third in 41:18.

Sub-30min 10k ace Matt Bowser won his first race of the year in style at the Eye 10k in Peterborough on Sunday (May 12), taking the win by nearly a minute on the tough multi-terrain course.

Lincoln Wellington’s Bowser’s time in victory was 32:11, while his club mate Jake Richardson ran a consistent 33:06 for second. Peterborough AC’s Chloe Finlay clearly enjoys racing as she was in action once again this weekend, taking another win here in 37:22.

Finlay’s club mate Sarah Caskey continued her return to form with a 41:05 result for second, while Werrington’s Ellie Swire was a popular third in 41:59.

Helpston Harriers were on fire this weekend as the club’s Steve Robinson was in winning form once again at the Titchmarsh 10k on Sunday (May 12), taking the title in 33:49. His was a comfortable win ahead of PAC’s James Whitehead’s 34:13 clocking, while Kent AC’s Glyn Parry was third in 34:57.

There were impressive displays of speed endurance on display at the Leeds Half Marathon on Sunday (May 12) when Altrincham & District’s Mo Abu-Rezeq took the overall win in a fast 67:57.

The Jordanian national was supreme in victory, but that takes nothing away from Sudan’s Abdalla Targan’s performance in second, the Sudanese Olympian running 69:58 for a great runner’s up result.

Ross is an Olympian who ran for GB on every surface to a superb level, and although she didn’t challenge her 32:28 PB here, she still won comfortably in 37:10. Gala Harriers’ Kirstin Maxwell was second lady in 39:38, while third place went to Jocelyn Moar in 41:04.

Renault has been on the racing scene at a high level for many years and is still in top form, winning here in 33:12. Gala Harriers’ Darrel Hastie was second in 33:27, with Edinburgh’s Iain Whitaker taking third in 33:35.

The notoriously hilly Hereford Half Marathon was a rich hunting ground for Croft Ambrey’s Gemma Mallett and Swansea Harriers’ Phil Matthews, the pair both winning comfortably on Sunday (May 12).

Matthews was also a dominant winner in 71:25, ahead of the brilliantly named Sage Pearce-Higgins (74:05) and Gosport RR’s Ben Toye, who clocked 74:15.

Down in the beautiful South Hams in Devon more than 800 runners took on the stunning Ivybridge 10k, with Tavistock Run Project’s Jim Cole and Tamar Trotters’ Rebecca Ezra taking the titles.

Cole’s time in victory was 32:23, a convincing margin ahead of his team mates who made up the top four overall.

Ezra won in 38:32 from Katie Deards’ 39:22, while Erme Valley Harriers – the town’s premier club who have produced a flight of top track and fields runners as well as road athletes – retained one of the prizes up for grabs when Cleo Perry finished third in 40:09.

Also down in Devon was the hugely popular Bideford 10k, with the club’s men filling four of the top five men’s positions on the day (May 12). Tiverton Harriers’ prolific racer Serane Stone won the women’s prize in 37:41, ahead of Cornwall AC’s Ruby Orchard in 38:04. London Heathside’s Leigh James was rewarded for her long trek to the south west with a podium position and a 40:28 result.

The Loch Leven Half Marathon in Kinross saw wins for Central AC’s Lewis Millar in 71:58 and Fife AC’s Sheena Logan in 84:35, the latter also finishing in the top 10 overall on Saturday (May 11).

Carnethy Hill RC’s John Hammond was close behind in second with a 72:05 result, but it was nearly eight minutes before the next runner crossed the line, namely Kinross RR’s V40 David Scott in 79:58.

Running over a slightly longer distance was top ultra runner Jonathan Albon, the 2:30 marathoner finishing a superb fourth at the Transvulcania Ultramarathon in the Canaries in 7:36:34 on Sunday (May 12).