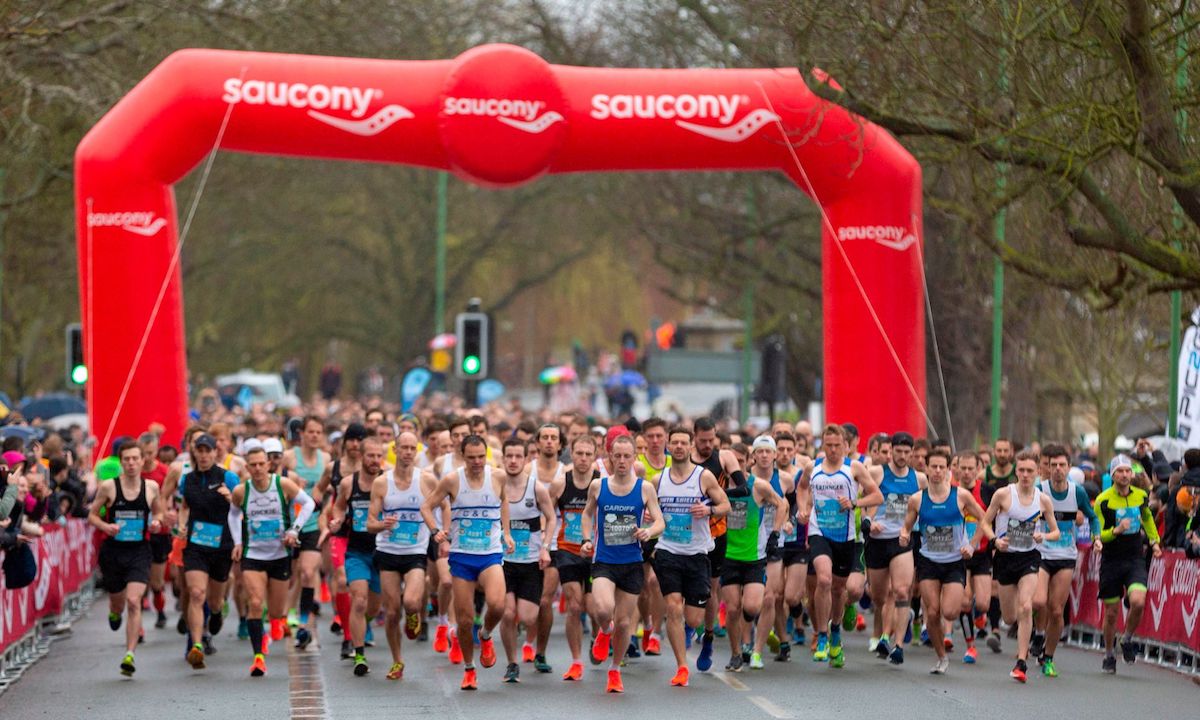 The Cambridge Half Marathon saw wins for Michael Kallenberg and Victoria Knight while the Podium 5k once again witnessed super fast times in monsoon weather.

Cambridge & Coleridge’s Victoria Knight continues to be an inspiration to runners of all ages as she took her latest victory at the Cambridge Half Marathon on Sunday (March 3).

The 42 year-old mother of two only took up the sport seriously a few years ago, and since turning 40 has represented England on a number of occasions.

While she didn’t challenge her 74:42 PB from 2017 she was still well clear when she took victory in 77:20 in wet and windy conditions.

Another veteran to keep an eye on is Riverside Runners’ Johanna O’Regan, who was the runner up in Cambridge in 78:33, representing another PB for the V35.

It was a masterful display of masters athletes on the women’s podium as V35 Emma Hodson from Oxford Uni also improved her lifetime best with a fine 80:22 result for third.

Cardiff’s Michael Kallenberg was also in PB shape as he shaved vital seconds off his best for the distance from 2016 with a winning time of 66:40 to finish more than two minutes clear of the competition. Cambridge & Coleridge’s impressively consistent Chris Darling took another 30 seconds off his half marathon best with a 68:54 result, while Ely Runners’ Alan Darby’s 69:04 was a fast third.

Chris Barnes always ensures a top class competition for all those who turn up on the night with their £5 note in hand and a decent idea of what time they’re likely to run on the notoriously speedy 1k multi-lap tarmac course.

Meslek took the men’s A race by four seconds in 14:42 from Jarrow & Hebburn’s Chris Parr, while Swansea’s Jon Hopkins was just two seconds behind in third.

International steeplechaser Rosie Clarke followed up her Alsager 5 win last month (where she ran 27:14) with victory here in the women’s A race in 16:10.

Returning to the half marathon action, Oswestry Olympians’ Alison Lavender was in winning form once again as she took the Anglesey Half Marathon title in 81:56 (March 3).

The 76:44 ace is always a class act over the 13.1m distance, and was dominant here when she won by four and a half minutes.

Alaina Beacall ran well to claim the runner up spot in 86:27 while North Wales Road Runners’ Gemma Moore was third in a strong 87:21.

Over at the Warwick Half Marathon (March 3), Salford Harriers’ Gary Priestley crushed the opposition on a hilly course in a time of 72:19.

The English mountain running international was more than three minutes clear of Spa Striders’ Ian Allen, who clocked 75:39 to just hold off club mate Chris McKeown’s 75:44 in an exciting finish.

Leamington Cycling & AC had a great day in the women’s race, taking the first two spots and filling four of the top six finishing positions.

The club’s Natalie Bhangal was the overall victor in 87:23 from club mate Sue Harrison’s 88:38. Bromsgrove & Redditch’s Becki Timmings was a fine third in 89:41.

Another half marathon witnessing fast performances this weekend was the Berkhamsted Half Marathon (March 3), with wins for Enfield & Haringey’s Alex Milne and Higham Harriers’ Rachel Doherty.

Doherty’s win represents a welcome return to the top of the podium for the mother of one and 78:04 half marathon runner at her best. The Higham ace was well clear of Watford Joggers’ Helen Mussen, who nevertheless clocked a fine 85:33 for second place. Bearbrook RC’s Helen Mulhall also made it onto the prize list with a 87:58 result for third.

Milne’s winning time in the men’s race was 71:18, exactly two minutes ahead of second placed Michael Waddington from Ware Joggers. It was a closer battle for third with Thomas Saville just taking it in 73:37 from St Albans Striders’ Paul Adams, who clocked 73:44.

Moving briefly away from the half marathons, there was also one of the best value road races in the UK – perhaps even in the world – taking place in Southend when runners flocked to take part in the Essex 20M (March 3).

With entries starting at just £6 for club runners and rising to a still incredibly cheap £15 for on the day entry – although the race always sells out well before the day! – the Essex Championships and Inter-County match between Essex, Kent, Norfolk, Cambridgeshire, Bedfordshire, Hertfordshire, Hampshire and Sussex is a joy to behold for grass roots athletics.

Victory went to Havering and Essex’s James Connor in 1:46.25, with Essex comrades Paul Molyneux from Springfield Striders (1:48.20) and Paul Whitaker from the Road Runners Club (1:49.39) ensuring they won the county prize with ease.

The women’s top prize went to in-form Lucy Reid from Tonbridge and Kent in a superb 1:59.13.

The England international was well clear of Witham RC and Essex’s Rachel Sweatt, who clocked 2:09.05, while Brighton & Hove AC and Sussex’s Lucy Rogers took third in 2:12.16.

Cole took victory in 74:42 from Eastbourne Rovers’ Richard Jones and Billy Mead, who clocked 78:21 and 79:19 respectively.

Stemper’s 89:19 winning time meant she won comfortably from Coralie Antille, who crossed the line 91:15. Antille didn’t enjoy as easy a time of it, with Meads Runners’ Katie Stephens chasing her all the way, eventually finishing third in 91:40. The Sunderland Stroller fitted the race into her Sunday long run in style with a marathon-paced 10k win in 35:41.

Her Strollers club mate and long run partner Wendy Chapman was a worthy second, the V50 athlete running 41:14 to head off Sunderland Harriers’ Amy Callaghan, who clocked 42:48 for third place.

It was great to hear that Border Harriers’ and GB track international Tom Farrell was also in winning form at Dalton Park!

The 2016 Olympian and 2015 World Championships finalist was well clear at the head of the men’s race, taking first prize in 32:01, which was also part of a long run for the 13:10 5000m star. Hopefully this might mean we will see more of the exciting Cumbrian talent this year.

Liam Taylor (both unattached) was second in 34:22, while Gateshead Harriers’ Dan Alexander’s 34:55 ensured he crossed the line in third position.

There were similar winning times at the Nairn 10k in the glorious Scottish Highlands, with Inverness Harriers claiming all six of the top men’s and women’s podium prizes!

The club were on sparkling form, with John Newsom taking the men’s win in 32:27 and Jenny Bannerman the women’s victory in 35:53.

Donnie Macdonald took the second men’s prize – and the prize for the most Scottish name of the day – in 32:43, while the club’s Gordon Lennox was third in 33:28.

Amy Hudson and Lesley Hansen were the second and third women in 38:30 and 39:55 respectively – well done Inverness!

While most track fans’ eyes may have been on the European Athletics coverage from Glasgow this weekend, don’t forget there were also some super speedy parkrun times being clocked up across the UK!

British internationals Jess Piasecki and Charlotte Arter were on fire to run the first and second fastest parkruns yesterday (March 2), with both breaking 16 minutes and Piasecki clocking the second fastest UK parkrun ever – behind only Arter’s 15:50!

Callan Moody topped the men’s rankings with a superb 14:33 at Dulwich.

Find out who else made the UK parkrun top ten here!