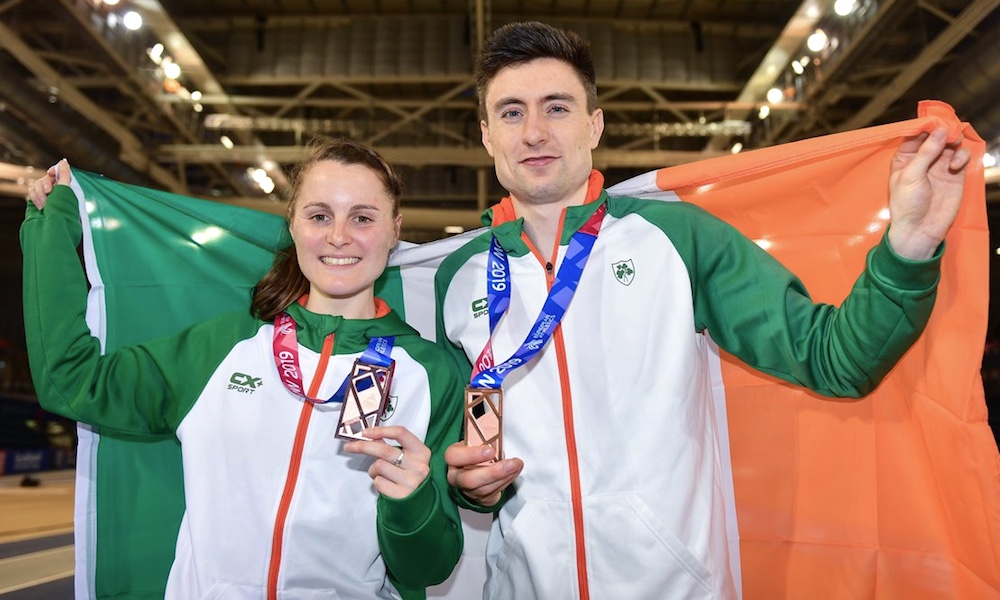 The pair impress on the track in Glasgow while Mick Clohisey and David Flynn win on the Irish roads.

English had to get through to the final on an appeal after being impeded in the semi-final but there was no doubting his metal in the final.

The UCD athlete was at the head of the field from the get go after pre-race adivce from his coach Steve Magness.

“Steve told me to get out from the start and expend some energy so I’ve to thank him for that,” said English. “It was really good to get a medal and it shows the young athletes out there to keep sticking at it.”

This was the Donegal man’s third European medal over 800m – he won bronze outdoors in Zurich and silver indoors in Prague.

Mageean has endured some difficult moments the last couple of years but this was a brilliant response and added to her European outdoor bronze in 2016.

“It can’t always be up, up, up,” all the time said Mageean afterwards. “I run to wear the green, white and gold. It’s brilliant to be back on the podium. I went out there to run my best race.”

Clohisey finished in 19:16, with Clonliffe’s Ian Guiden second in 19:32 and Padraig Moran of Mullingar Harriers third in 19:52.

Catherina McKiernan of Annalee AC was tenth overall and first woman in 22:49. Ailish Murtagh of Raheny Shamrock was second in 24:48 and Harriette Robinson of Dundrum South Dublin AC a close third in 24:33.

At the Kearney and McBride Cup 5km in Co Louth, also on Sunday, Peter Arthur of Liffey Valley AC was the runaway winner.

Arthur’s time of 15:06 put him over a minute clear of Stephen Kelly of Drogheda and District AC who finished in 16:23. Catherine O’Connor of East Down AC was first woman in 18:04 with Sile Carroll of Liffey Valley AC second in 19:14. Liffey Valley won both men and women’s team titles.

A number of the women making up teams in Lusk had already taken part in the third and final Meet and Train women’s two-mile cross country at Abbotstown earlier in the day. This was the first time a club race had taken place at the National Cross Country venue.

Phil Kilgannon of Sportsworld AC and Aisling O’Connor of Edenderry AC were winners of the Adamstown Community 10km held on Sunday. Their times were 36:21 and 38:01.

With a time of 19:05, O’Brien finished comfortably clear of her DCU team mates Avril Deegan and Nadia Power. DCU were comprehensive winners of the team trophy ahead of Trinity College and UCD.

Making in a DCU double in the men’s 8km was Paul Robinson, who had a tough battle with Damien Landers of NUIG and out-sprinted him for victory. Robinson’s winning time was 26:40 with Landers on 26:41.

Finishing a distant third in 27:01 was Paul O’Donnell of UCD. DCU was first team, with UCD second and NUIG third. DCU also finished best overall college ahead of UCD and TCD.

Clonliffe’s David Flynn set a new course record of 52:15 on his way to an untroubled victory in the Walled City Derry 10 Mile road race on Saturday.

Second was Gary Slevin in 53:43. First woman was Ciara Toner of Springwell RC in 61 minutes exactly. Catherine Whoriskey of City of Derry Spartans was second in 63:09.

Dean Adams of Ballymena and Antrim AC had a narrow victory in the 60m at the Leinster Indoor Championships held in Abbotstown on Saturday.

Adams time of 6.85 secs put him just one-hundredth of a second ahead of Leo Morgan of Clonliffe Harriers who was second in 6.86 secs.

Carla Sweeney of Rathfarnham WSAF AC won the senior women’s 800m in 2:17.14. Winning the senior men’s title was Philip Marron of Ratoath AC in 1:55.68 with Colin Smith of Mullingar Harriers a close second in 1:55.68.

Martin Cox ran 15:52 at the MUSA Cookstown parkrun to record the fastest men’s time across Ireland on Saturday, while Rachel Gibson was the quickest woman after running 17:20 at the Belfast Victoria event.

The 10 fastest times at Irish parkruns can be found here.