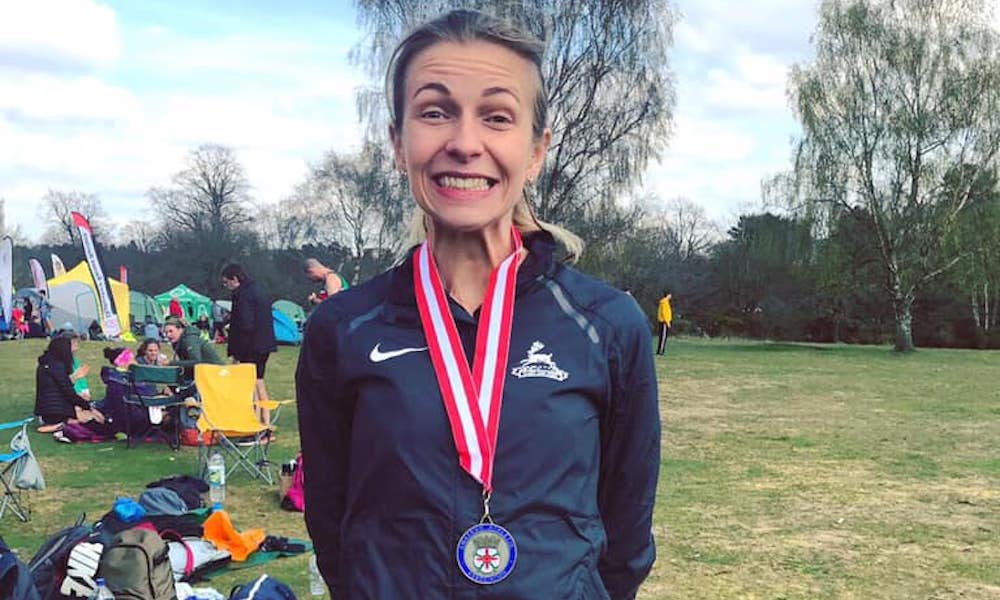 The London marathon-bound Birchfield Harrier may have big mileage in her legs but she proved her shorter speed is still there at the National 6 Stage Road Relays on Saturday (April 6).

Crucially, that also represented an 18 second improvement over the same distance from just a fortnight before, when the 25 year-old ran the fastest long leg at the Midlands road relays on the same course.

The 2:36 England international marathoner has certainly not been neglecting the speed sessions in her build up to London.

While the 2019 World Championships qualifying event is undoubtedly her A race, she has used shorter distance events to boost her training to give her as much of an edge on the competition as possible.

Regular low-16min parkruns alongside a 9:26 3k at the Armagh International – together with long marathon miles – surely helped Carruthers post her superb 71:57 PB at the recent Big Half Marathon too.

So what does the Birmingham-based athlete’s training look like in a marathon build up?

“My training is pretty simple,” she reveals. “My coach, Dan Robinson, is the first to say there are no magic sessions. While we plan it out together it is also really adaptable, and takes into account how I’m recovering from sessions.”

Robinson is based at the University of Wolverhampton’s Department of Sport and Physical Activity, where Carruthers spends much of her time outside of work in the gym and talking to the renowned sports psychologist, Professor Andy Lane.

She continues: “A typical training week includes one session of shorter reps on the track, one of longer road efforts or a threshold run, a parkrun and then the traditional Sunday long run.

“I probably average 80 miles a week. That’s quite enough for now, but I’m fully aware how other marathon runners do well over 100.”

It’s important to remember at this point that Carruthers only entered the sport seriously less than 18 months ago, reducing her marathon PB from 3:22:58 in 2017 to her current 2:36:48 best last autumn under the coaching of Gary Warhurst. Since teaming up with Robinson soon after she has built on those first crucial training building blocks in impressive style. It’s all about the speed work, she says.

“Before this build up I’d never really done speed work and my training was much more one paced,” she explains.

“Now I can be doing mile reps at 5:15min/mile pace on a Tuesday and on Wednesday doing a recovery run at 8:30 pace.”

Hayley’s gym work is her strength

It’s in the gym where Carruthers really is a step ahead of many of her competitors, though.

“Despite the attention it gets online, I still think a lot of runners neglect this side of the sport,” she observes. “I know I would struggle to get through the training if I didn’t pay attention to strength and conditioning.

“The fact I have a strong background in the gym means I appreciate the value of being strong and resilient.

“I do small amounts of S&C throughout the week, with one longer session on a Thursday evening. Rhys Lincoln (Hayley’s S&C coach who works at the University of Wolverhampton and is also a professional Ozzie Rules player) is the expert and I take his advice. I’m lucky that I get to use the university’s S&C suite, which is a great facility.

Physically strong. Mentally indestructible. 🌟 . . . Today was a great day. Double run. Strength and conditioning session with @rhys_lincoln_. Psychology session with the Prof Andy Lane. Sports message ✅ Truly blessed to be surrounded by such a fantastic team at @wlvuni. Stronger everyday towards @londonmarathon 🇬🇧 . Standing on that start line… I will be ready. 💫 #londonmarathon #strongereveryday

“Rhys is there for the main session and lets me have lots of stuff remotely. We also have a Whatsapp group that is used largely to abuse Dan for being hopeless at some of the exercises!”

Fuelling long marathon miles should not be overcomplicated

In the modern world of commercialised running, sports supplements and running nutrition advice is abound.

Carruthers is keen to keep this area of her life as simple as possible, and just eat real food. While she does not shy away from sports drinks such as Maurten, it is her day to day diet of whole foods that keeps her going.

“One of our keys with this is not to overthink,” she confirms. “There’s so much literature and advice out there which I think can become overwhelming.

“I try to eat unprocessed foods and largely just rely on hunger, which is pretty constant at the moment! I have an awareness that I need a good balance of protein and carbs, but nothing is ever measured, and I certainly never deprive myself of anything.”

Heeding the importance of mental strength in sport

As any seasoned marathoner will know, being physically well trained for the race is only half the battle.

The mental side cannot be neglected, but it is surprising how little time many runners put aside to prepare themselves for the negative voices that often rear their ugly heads in the latter stages of the marathon – or even earlier if outside forces are at play, such as adverse weather.

Carruthers has always been well aware of the need to be prepared for those potential race-upsets.

She has read and listened to sports psychology books and podcasts widely since she began her rapid climb up the ranks of the sport’s elite.

“I do love a mantra,” she admits. “My dad is always a good source for those. ’Run Brave’ was his motto for the Big Half. I knew he was waiting at the end so I tried to think of that throughout the race. I also try to envisage some of the hard sessions I have done and think how I have got through tough times before and I can do it again!

“I listen to podcasts in the car when I am driving to and from work too. I really like ‘Let’s get running’ and ‘Marathon Talk’, they always have really interesting and varied guests and are relatable.

“I read a lot too. My favourite running-related books are ‘Achieve the Possible’ by Greg Whyte and ‘This Mum Runs’ by Jo Pavey, but I’m also enjoying ‘Notes on a nervous planet’, which is a brilliant non-running book.”

It’s impressive the Birchfield Harrier finds time to do anything else outside of work, running, gym work, reading and listening to podcasts, but that she does.

The role of sports psychology in running

When she’s not doing all of the above, Carruthers meets with Prof Lane on a regular basis to help her prepare for the mental challenges of running and racing at such a high level.

A V50 athlete and a 2:57 marathoner from his V45 days, Lane is a sport and exercise scientist as well as a sports psychologist.

“I want to learn in all areas,” Carruthers explains. “Dan works with Andy on a daily basis and, seeing as he is one of the most well-respected psychologists working with runners, it makes sense to tap into his knowledge.”

Carruthers is all too aware of how lucky she is to have such a strong team around her at the University of Wolverhampton.

“Given that I am also working (Hayley is a full time research radiographer at Queen Elizabeth Hospital in Birmingham) it is really fortunate I have the university’s facilities and Dan, Rhys and Andy right on my doorstep,” she says gratefully.

“Dan and Andy have given me a whole toolkit of strategies to help with the mental side of things and I try them out in sessions to see what most suits me. It’s good to have different things to turn to in a race so you aren’t reliant on one thing.

“As I go along I realise it’s ok to be nervous, but that doesn’t mean I will run badly!”

With just one running event on the calendar between now and the London marathon – her birthday parkrun at Walsall Arboretum on April 20th – Carruthers has time to work on those nerves and use that pre-race energy to her benefit.

Is a World Championships qualifying time on the cards? We’ll have to wait and see…