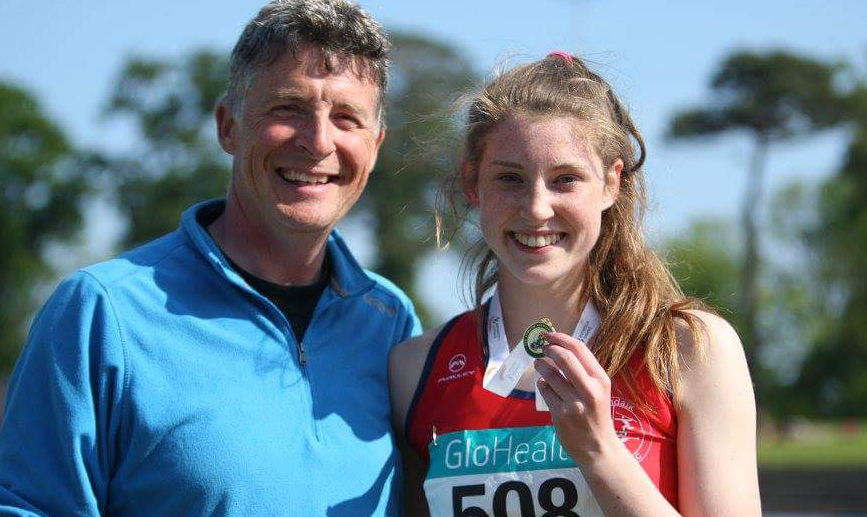 It was a cold, dark night with a strong crosswind. The six-lane track in Newry, was brightly illuminated, yet seemingly deserted. An old school building dimly loomed in the distance. Then I spotted two figures at the far end of the track, the high jump area.

One was doing some type of drills, appearing to effortlessly bound high into the air, and hang there before gravity finally took effect. The other was attentively supervising.

Before I even reached them, Michael O’Connor was already walking over to meet me. While his daughter, Kate, waved and called out a greeting. Typical of this team, friendly and down to earth. Yet also focussed on what they are doing. The drills continued until completion.

Soon Kate was bubbling away, funny stories about training, rueful observations about the weather. Michael joining in, the O’Connor grin never far from his face. And the two of them have plenty to smile about!

Kate O’Connor has to be one of the most promising young athletes that Ireland has seen. Gifted in a range of events Kate now specialising in the heptathlon.

Hailing from Dundalk in the Republic of Ireland, she can be hard to catch up with in more ways than one. Kate is also eligible to compete for Northern Ireland in the upcoming Commonwealth Games next season April in Gold Coast, Australia.

As well as training on the track in Newry in Northern Ireland, Kate also attends specialist sessions in Belfast, including gym and hurdles work. Michael is enthusiastic about how helpful Athletics Northern Ireland have been, even organising two periods of warm weather training for Kate prior to the Commonwealths.

2017 was a breakthrough year

She finished eighth at the European Junior Championships in Grosseto Italy in July, setting a new youth record, and as she is only sixteen she will still be young enough to have another bite at the cherry when they come round again!

Before that, she was selected to represent Ireland at the European Team Championships (Monzon, Spain) in June and finished third. This was a 16-year-old competing in a senior competition, a remarkable achievement. And according to Kate, the highlight of her career so far. She is enthusiastic as she recalls competing against Olympic medalists and how her elder team-mates warmed to her. 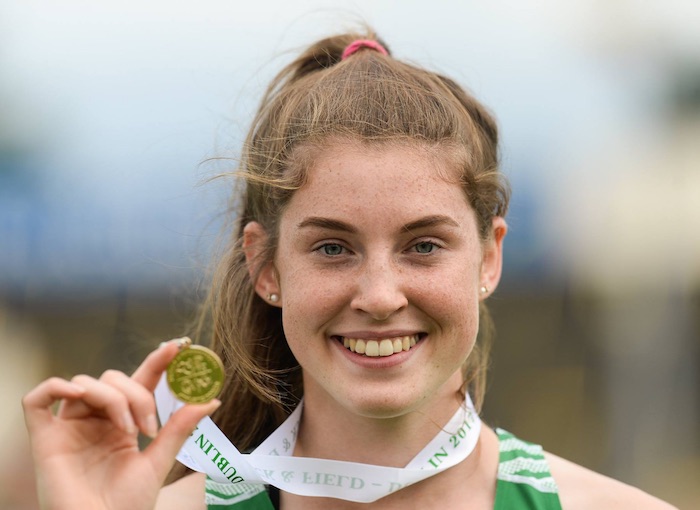 Kate also attained the Athletics Northern Ireland Commonwealth Games Consideration Standard twice (as required) in 2017 and is ranked third out of the fifteen athletes nominated. Needless to say, she is also the youngest.

There had been signs that Kate had a very special ability. In 2015 she went to the SIAB Schools Pentathlon in Glasgow and won. She broke the championship record – previously belonging to a certain Katarina Johnson Thompson.

Kate explains how she first went to a local running club when she was seven-years-old. She was a good runner but realised that she could also throw and jump. She was training for the 800m but wasn’t a fan of cross country during the winter, so she branched out and tried some pentathlons – the rest is history.

This also illustrates how Michael has not pushed Kate in her career, he has allowed her to find her way while being there to support and guide her decisions. The focus has been on Kate enjoying her sport, and it is very obvious that this is a girl who loves her athletics. Ask what her least favourite session is, and she doesn’t have one.

Bright future ahead with the support of her dad 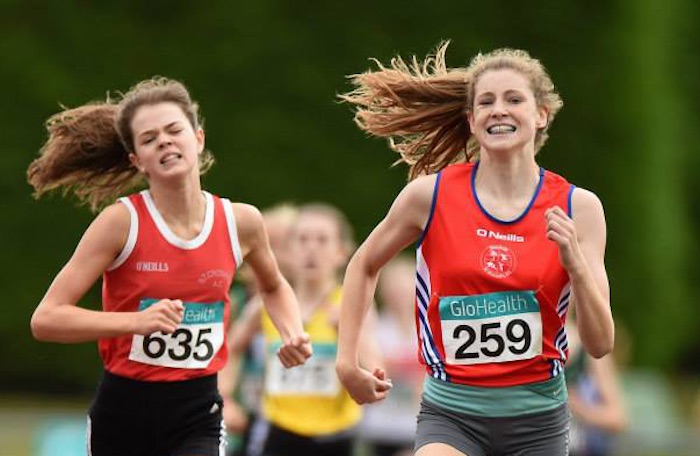 The father/daughter, coach/athlete relationship is remarkably frictionless. And Michael is not afraid to use the specialist event coaching that is available to them. They are both very vocal in gratitude for all the assistance they have received, both from Athletics Northern Ireland and Athletics Ireland. And Kate really wants to thank the Mary Peters Trust for the award she received earlier this year.

Surprisingly, despite her high profile, Kate still has not got a shoe/kit deal – but this should only be a matter of time.

Kate has already experienced her first serious injury, and how she coped showed maturity beyond her years. Yes, she admits it was frustrating and she had to forget her targets for the season. But she said she learned a lot about herself and the team that looks after her. And she actually embraced the opportunities that this period of inactivity gave her. She took part in the school play and did other things she normally never has time for.

Her family and friends were a great support during this time. Kate enjoys watching her younger brother and sister take part in their own sports. And she jokes that she had no option but to support Manchester United and Dundalk Town, with her dad in the house.

It is a pleasure talking to Kate. She has no false airs and graces. She takes pleasure in seeing others do well too. One of her favourite things to do is just simply hang around with her friends back home.

Watch Kate at training, or before a competition, and she looks so relaxed, even laid back. That is until she is in her blocks or on the runway and her demeanour changes,  focus on her face – tunnel vision.

Just like now as she sprints off into the cold night air, intent on hitting the right time for this repetition, listening for Michael’s whistle every fifty metres. Make no mistake about it, this young lady is aiming for the very top.