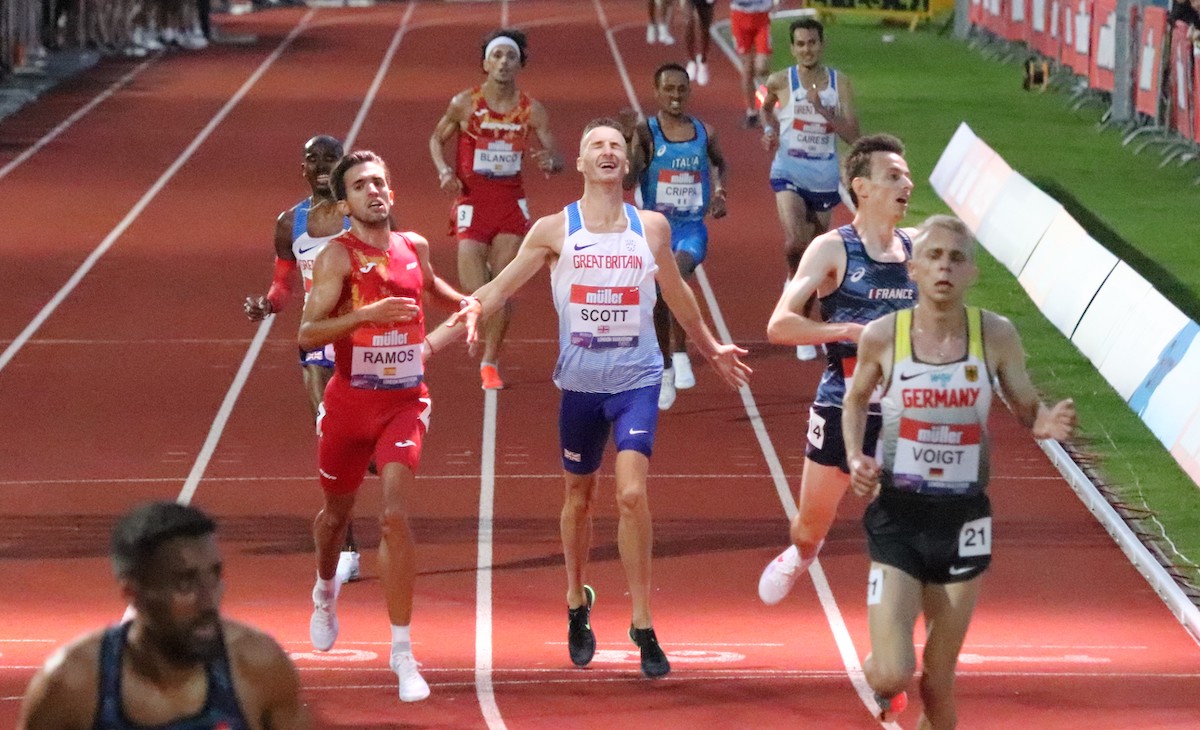 With the Olympics in full swing and the medals already rolling in Marc Scott is on his final ‘Countdown to Tokyo’ with James Rhodes.

Over a period of eight days, Marc Scott will do something only two men – Mo Farah and Eamonn Martin – have done in the past 50 years; represent Great Britain in both the 5000m and 10000m at the same Olympic Games.

It is an undoubtedly impressive feat for the US-based Yorkshireman who has had a rollercoaster year that has included records and PBs alongside injury and setback. I caught up with Marc from his training base in Hawaii as his Tokyo preparations reached their final stages, and he shared his thoughts of the past few months, his Olympic goals and plans into the future.

Whilst he may have only come to the attention of more casual followers of the sport this year, Marc has worn the Great Britain vest since 2014. In that time, he has raced at two World Championships alongside European Championships, European Team Championships and three European Cross Country Championships. Add in a coveted NCAA title over 10,000m in 2017 (a feat replicated by Patrick Dever this year), and there is plenty on his athletics CV to talk about.

However, Tokyo represents his first Olympic Games and he is relishing the opportunity to toe the line with the world’s best, even if COVID means it will be a very different experience to usual:

“It’ll be nice to travel with the British team again and be surrounded by it all. It’s going to be nice to be in the village environment. Everyone’s there for a reason, to obtain their personal goals.
I’m really not sure what to expect, just because of the whole COVID environment. There’s a lot of apprehension about COVID and testing positive.

It would be nice to integrate with as many people as possible from around the world and get to know people, catch up with people we know from the circuit, but there’s not going to be any of that unfortunately. We’ll just have to wait and see what it’s like. I just need to do my own thing – I don’t want to test positive or put myself at risk”.

Marc’s goals and expectations for the races themselves are, however, clearer:

“It’s hard to say because we just don’t know how the race is going to go. Fast or slow, it is what it is, I’m going to go with the pace regardless of what it goes out at and see what we can do. I’d probably say it would be nice to come in the top ten in the 10000m, and then for the 5000m moving forward and seeing how we come back off the 10, obviously the first goal would be to make the final, but I’m not really putting any emphasis on the five right now, I just want to get through the 10. If I come in the top ten, maybe it will give me a lot of confidence going into the five, but the minimum goal would be making the final and being competitive at the very least”.

One Step at a Time

Marc’s journey towards Japan took its first steps back in February 2020, when he ran 13:08.87 indoors to go under the 13:15.10 qualifying standard, setting a PB, British Record and European Record in the process.

However, it was over the space of a fortnight at the end of February and early March this year where step-change performances came that all-but-confirmed his place in the British squad, running lifetime bests over 10000m (27:10.41) and 5000m (13:05.13) to go well inside the Tokyo standard. Naturally those races provided a confidence boost and cemented Marc’s intentions to attempt a double-up come August:

“The goal was always to double up, pretty early in the season. I think I did set out those intentions to people pretty early on, obviously with my coach we discussed it and we decided early that we would like to do both, if I got selected for both firstly, and I had to get the time for the 10000m. We were always shooting for [the time] anyway, I just didn’t expect to go under the standard by that amount that night.

Then obviously it was just in the selectors’ hands once the foot blew up, we decided it was probably not wise to go and race again, but to leave it up to them”. However, it was not until early June in Birmingham that his place at the Olympics was confirmed, thanks to a first-place finish at the trials held as part of the European 10,000m Cup. It was a race-within-a-race, with Marc. hampered by a foot injury, finishing seventh amongst the wider European field. I asked him to run through his recollections of those 25 laps and the emotions of securing his Tokyo spot:

“It was obviously a great feeling and a lot of relief off the plate, but at the same time I just knew that I could’ve won the race. Obviously, I won the British Championships, but I wanted to win the whole race, and the way things had been going in the season I knew I was capable of doing that. It was hard getting too upbeat, just knowing how much pain I was in, my foot was really bad. That put a little downer on things.

It was a bittersweet moment really, just because of the pain I was in but obviously I was ecstatic and excited to go to my first Olympics. It started sinking in a few days later and thinking “I’ve done it!”, before knowing now I just need to get my head down, firstly getting the foot sorted and then making plans going into the future and on to the Games”.

The severity of that injury was not widely known until, in the days leading up to the British Championships, an Instagram post confirmed Marc would not be competing over 5000m after partially rupturing his plantar, which then fully ruptured and pulled off the bone during the 10000m trials. Marc noted it was not necessarily a difficult decision to miss the Championships:

“I made the commitment not to run the 5000m at the trials after the 10000m, because I wanted to get back to get back with my group. I had a foot issue going on at the time, and we just thought it was best to get that resolved and get back training with the group at altitude rather than waste time down at sea level knowing that I was already going to the Games. It was then obviously up to the selectors if they wanted to take me in both events. I took a little bit of time off, well a few days off, after the 10000m and started getting back into things.

Since 2017 Marc has been based in Oregon as part of the Bowerman Track Club, a Nike-sponsored training group led by Jerry Schumacher, with an athlete roster including 2016 Olympic Champion over 1500m Matthew Centrowitz and steeplechase silver medalist Evan Jager.

When I spoke to Marc ahead of the 10000m trials, he noted how beneficial it had been to be training with his BTC teammates sharing a collective goal. That collective goal has been realised, with Marc set to be joined by three clubmates in both distances (Americans Woody Kincaid and Grant Fisher and Canadian Moh Ahmed) alongside Kirean Tuntivate (Thailand) in the 10000m. Marc noted the added beneficial dimension this provides alongside the pride of wearing the British vest:

“It helps a lot. It’s good to be able to do it with all those guys in the field after training with them day in and day out. It’ll take a bit of pressure off all of us, I think, which is nice. There were a couple of question marks about whether everyone was going to double, just with some potential medal chances and whether they were going to put all their eggs in one basket. Especially with the 10000m being first; it’s one of the deepest fields we might see in a long time, so we just didn’t know if that would take away from the 5000m for some people, or vice versa. But all four of us are committed to doing the double. It’s just going to be nice having familiar faces on the start line, just in a different vest, but that’s all good!”.

Looking to the Future

Of course the focus is very much on the next two weeks, but it would be remiss of me to not ask Marc about his future plans, particularly given his impressive half marathon debut in Antrim last year (60:39), as well as his placing at third and second on the British all-time list for the 5 and 10 on the track. Are these marks something on Marc’s mind?

“I’m looking at a few races at the minute. I know that there are a lot of opportunities after the Olympics for people to chase times, and I think that is something I’d like to do. Whether there’s a race that could go under 13 minutes, that would be a good option to look at. I’ve been speaking with my agent and we’ve been looking at the Diamond League circuit after Tokyo, so I’m going to get entered into a few of them and see what we want to do.

I am entered in the Antrim Coast Half and then the Great North Run as well. I know the course for the Great North Run has been changed so it might not be as quick as it usually is, but I am entered in them. I’m not saying I am going to do both of them, but they’re on the calendar just in case. It’d be nice to break 60 minutes at one or both of them, but the track racing is probably going to come first and then we’ll move onto the roads and see what I’ve got left in the season.

Later in my career the road is probably what I’m going to end up going towards, and that’s where I’ll be looking to get British records. I am very much at home on the track, but the roads are probably where I do feel most confident and where I feel I’ve got a lot of potential left having been limited with the opportunities I’ve had so far”.

Finally, I shared one of my favourite facts to tie the height of athletic achievements with my own running career. Marc is one of seven athletes representing GB in Tokyo who competed at the 2010 Mini London Marathon, my last race as a junior. Whilst every runner when young has a dream to become an Olympian, I asked whether 16-year-old Marc ever imagined he’d be doubling up at the competition that sits as the pinnacle of this sport. He was naturally modest in response.

“Obviously it was always my dream to go to the Olympics, I just didn’t know how attainable it would be. You never know what’s around the corner in this career. When I started out running it was always my goal, but I didn’t even know becoming a professional was really a thing when I started running. It just shows what you can do as a youngster, even if you’re not the best at that point, what you can go on and do later in your career, and I think I’ve been a good example of that. I’ve just stuck at it and worked throughout the years, and here we are about to double up at the Games!”.