Olympian Tommy Hughes aims to bounce back into the record books 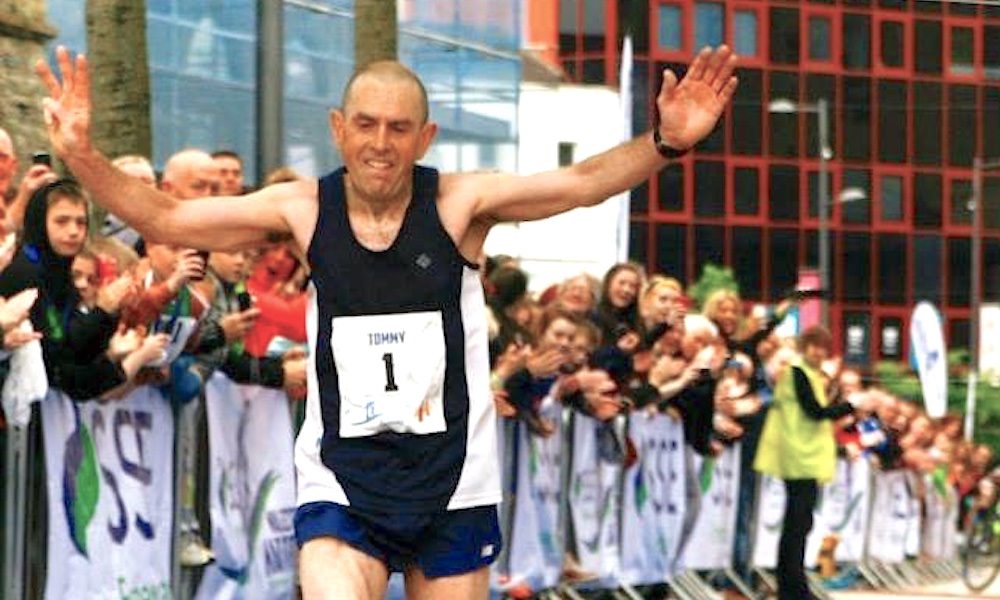 Tommy Hughes is one of Ireland’s best ever marathon runners who continues to beat athletes half his age.

The man from Maghera in Northern Ireland ran the marathon in the 1992 Barcelona Olympics after running a 2:13:59 PB in Marrakech earlier that year.

That time remains the second fastest ever for an Northern Irishman, behind only Greg Hannon, whose 2:13:06 from 1979 remains unbeaten to this day. It also ranks as the 12th fastest for an Irishman.

Hughes’ enduring consistency over the distance is perhaps even more impressive than his lifetime best, though, with marathon victories and course records to his name well into his sixth decade.

Just last December the now 59 year-old ran 2:38:33 in Malaga despite running much of the second half on his own.

This year the Termoneeny RC ace is aiming to break five Irish V55 road records. Based on his most recent times for 5k, 10k, 10M, half marathon and the marathon, it would be a fool to bet against him.

Why then, is there so little literature about this great man from the Emerald Isle?

A marathon star under the radar

Hughes has competed all over the world, winning marathons in Marrakech, Melbourne and Nottingham to name but a few major city races.

While that result certainly ranks highly on his long list of achievements, his Olympic marathon run for Ireland in Barcelona 18 years earlier surely represents the pinnacle.

That same year in 1992 he sustained a stress fracture not long after his 2:13:59 in Marrakech, a race that earned him his berth on the Irish team.

Doctors told him he’d never be fit in time for the biggest race of his life, but, undeterred, Hughes took to the turbo trainer on his indoor bike, maintaining an impressive cardiovascular fitness as a result.

While his 2:32:55 in Barcelona was by no means an accurate reflection of his true abilities, it was certainly an impressive indicator of his determination to compete, whatever the circumstances.

That gritty persona has stood him in good stead ever since, particularly when fate threw a major medical challenge at him that threatened to not only destroy his running career but his life.

The three time winner of the Derry Marathon (the Walled City Marathon since it’s resurrection in 2013) started to feel increasingly and debilitatingly fatigued not long after that third victory.

As he approached his 55th birthday, the combination of excessive tiredness and, unsurprisingly, deteriorating performances led to Hughes sinking into a deep depression.

Months of binge drinking followed, culminating in the top veteran nearly losing his life to alcoholism having drunk bottle after bottle of vodka every day until his body was close to collapse.

A diagnosis, recovery and a return to form

Hughes takes up the story at this point: “It wasn’t until my wife said ‘enough’s enough’ and marched me to the doctors to find out what was causing my exhaustion that we got to the cause of my fatigue in 2016,” he explains.

“After a simple blood test I was diagnosed with para-thyroidism, a condition which causes a faulty thyroid gland to produce too much parathyroid hormone. This in turn causes blood calcium levels to rise, and as a result takes calcium away from the bones, leading to low bone density.”

While it is unclear whether Hughes’ condition was genetic or developed later in life, it’s worth questioning if his ill-timed stress fracture in his Olympic year was an unfortunate by-product.

An operation to remove the faulty gland was completed last August (2018).

In typically determined style, the then 58 year-old competed for the Irish Masters team in the Malaga Half Marathon just six weeks later, winning team bronze in the Spanish heat.

Hughes is keen to stress how important it is to raise awareness of the condition that is so easy to diagnose and treat (an operation or medication) so that others do not suffer the same avoidable consequences as he did.

“Depression is actually one of the most common symptoms of para-thyroidism, along with fatigue and weak muscles,” he explains.

“I now feel lucky and that I’ve been given a new lease of life. My running has also improved significantly, giving me the confidence to attack those V55 records this year!”

Reflecting on a running career spanning nearly 37 years, Hughes’ first marathon experience in 1982 was one that sparked a lifetime’s passion for the sport that captures so many.

Despite only running three runs a week of just four miles a piece in training, he still managed a 3:01:28 result in Belfast.

“I was very green to the whole running world, so I was happy with my time – it just made me train harder for my next marathon,” he says with a laugh.

Perhaps perversely aided by the fact that that same year witnessed a great depression in Ireland, Hughes found himself being made redundant at the same time as discovering a new and exciting talent.

“I accidentally found that I was good at running, so ever since then I’ve always worked around my training and racing, rather than pursue a career that would interfere with it,” he explains.

Just a year later he knocked an superb 26 minutes off his PB, posting a 2:35 clocking at the All Ireland marathon in Letterkenny.

His times continued to tumble with every passing year.

1984 saw his PB drop to 2:24 and then to 2:19 the following year when he broke the course record in Derry, retaining his title in the process.

The Derry Marathon then took a 29 year hiatus until it was resurrected in 2013, upon which time Hughes returned to the scene of his early glory years and promptly won it for the third time (technically in a row). His time aged 53? A superb 2:30:32!

By the end of the 1990s Hughes had firmly established himself as one of Ireland’s brightest marathon stars, a fact he is rightly proud of.

“I’d say by 1985 I had started to be recognised amongst my fellow runners as one to watch in the marathon,” he explains. “That year I left Northern Ireland for the first time to compete in a home countries international in Aberdeen, a big thing for me back then!

“I think it would be great to bring that style of competition back again, with Ireland, England, Scotland and Wales competing against each other in a marathon – it would encourage younger athletes more as they’d be representing their country from a potentially earlier age.”

The year kicked off with a blistering 2:15 PB in Marrakech, followed by a 2:19 win in Belfast in May and a 2:18 victory in Melbourne in October.

Perhaps unnecessarily he nevertheless clarifies that he does “love to race – I treat some races as stepping stones towards my main goals”.

His ability to regularly compete around the world was initially enabled by race organisers replying to Hughes’ requests to take part in their events and offering to pay his travel expenses.

“That, and the subsequent race winnings meant I could make a living, alongside bits of work here and there as a van driver and a store man,” he reveals. “I then got myself an agent who got me into more international races throughout the 1990s.”

100 plus mile training weeks meant his marathon times continued to be consistently up there with the best in the world.

It wasn’t until 1991 that he really began to consider himself a potential Olympian, however, when he ran 2:14:46 to win the Dublin Marathon.

The following year – Olympic year – saw him narrowly miss out on the Northern Ireland marathon record with his fantastic 2:13:59 PB in Morocco, but nevertheless booked his place to Barcelona.

How did Hughes maintain such impressive consistency despite – by this time – having run scores of marathons over the preceding decade, more than most respected coaches would recommend in today’s training bibles.

“I have always just run to feel, I don’t run with a watch and I always listen to my body”, he says enlighteningly.

“I rarely stretch, I don’t do any strength and conditioning work but I am never injured. I mostly run at 75% effort level, and always ensure I allow my body to recover properly before the next hard run.

“I think too many runners, especially when new to the sport, push themselves too hard too often. It’s all about patience, coaxing better times from consistent training.

“While I did have a coach for a short period, I’ve mainly taken care of my training myself and mostly train alone. I did see a big improvement in my running when I lived in England and trained with Leicester Coritanians for three years in 2011 – 2014 for work, though.

“The training group mentality can provide a massive boost to performance, and I do miss that now I’m back living in the countryside in Northern Ireland.”

Training and racing in England with Leicester Coritanians

That period living in the English Midlands came off the back of a superb year in 2010, when, aged 50, he won the Nottingham marathon in 2:29:12. Hughes followed that up with a superb 70:31 half marathon in Peterborough.

Moving to Leicester allowed the Northern Irishman to really harness the impressive speed endurance he’d developed in the preceding years.

“I loved my time running with the Leicester Coritanians – we won the National Masters Relays three years in a row when I was with them,” he recalls happily. “In fact, I’m returning to that same event this May to run for my old club once again, I can’t wait!”

Alongside those relay victories, Hughes notched up a 26:51 time over five miles and two more sub-2:30 marathons in 2012, before achieving that aforementioned incredible third win in Derry the following year.

Running mentality in the family

The super vet’s clear talent for the marathon is supported by an obvious internal drive to fulfil his potential which is so important for any athlete to achieve success.

That same drive is apparent in his son, Eoin, and his nephews Vincent McKenna and Jarleth Hughes, all of whom are gradually chipping away at their PBs while continuing to be inspired by Hughes senior.

“Eoin has definitely got the right attitude to succeed in this sport,” he reveals. “He’s got his 10k time down to 32 minutes so far, simply by training consistently, patiently and avoiding injury.”

The County Londonderry athlete is keen to not only support his family’s ambitions but also that of Northern Ireland’s up and coming young talent.

An integral cog in the Athletics Ireland Marathon Project, he is helping the scheme develop young athletes into future international marathon runners.

“They certainly have some great inspiration right now, with Kevin Seaward, Steve Scullion and Paul Pollock all running so well,” he says with a smile. “My money is on Steve to break 2:14 first though.”

So what of those V55 Irish records he spoke of breaking earlier?

The Termoneeny star admits the half marathon record will be his greatest challenge, and is still seeking out a fast course for the record attempt.

“I’ve chosen the Rotterdam marathon on April 7th as the course I’ll hope to beat 2:37 on – it’s played host to some absolute greats over the years, including Rob de Castella and Carlos Lopez, so it would be an honour to break the record there.

“The Wednesday before Rotterdam I’ll race the Queen’s Bridge 5k in Belfast, and a month earlier I’ll have raced the Titanic Quarter 10k, so hopefully I’ll go to Holland already a record breaker!”

There’s no doubting Hughes’ place is already booked in the Irish athletics hall of fame.

Hopefully once he’s firmly stamped his place in the V55 record books – at the age of 59 – he’ll be recognised far further afield too.