Carl Hardman is harder than most 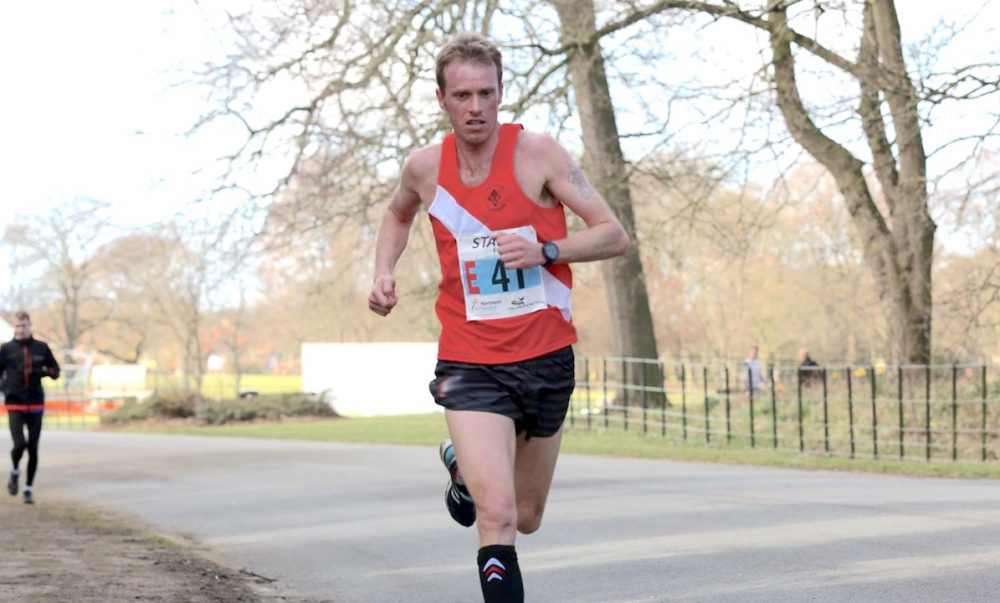 The 2:19 marathoner chats about his running ambitions while juggling a full-time manual job, the importance of his club and family life.

Carl Hardman ran 2:19:35 in his first serious attempt at 26.2 miles in Berlin last year but he’s adamant he isn’t a marathoner just yet. Keen to learn more about the distance he was in marathon training once again geared towards May’s Edinburgh event. However, after a fall on a wet bridge resulted in two weeks missed training, the Salford Harrier decided not to go ahead and instead reassessed this year’s priorities, and it’s not all about running.

“You can’t blag a marathon,” says Hardman on his decision to sit out the Scottish capital marathon despite only missing two weeks of training. “A 3k, a 10k, you can blag by just digging deeper, but the marathon isn’t like that, it requires every week’s training if you are to do it right.

“A lot of people end up chasing the marathon, but that’s not for me. It’s a really tough race and if you chase it too hard then it can be your undoing. I enjoy the shorter stuff, doing cross country over the winter and then targeting a marathon.”

With the spring marathon off the table for this year, the father of two has turned his immediate targets to personal bests over the shorter distances this summer and enjoying a family holiday to Disney World in Florida.

“I’ve still got some speed in me,” says the 35 year-old who holds 5k and 10k personal bests of 14:21 and 29:46 respectively. “I know I can still run faster. I thought about an autumn marathon after pulling out of Edinburgh, but if I am honest it was never really a serious thought because my wife and I are taking the kids to Disney World and that’s a once in a lifetime opportunity for them.

“They’re at that age where they will really enjoy it and I didn’t want to jeopardise the trip by being in full marathon training mode.”

Regardless of ability, any runner who takes their training and goals serious knows it can be very easy to fall into the trap of prioritising running over everything else, so it’s refreshing to hear from someone who was so quick to not even entertain that idea. This along with the fact that Hardman spends his days digging up roads as a gas mains service layer, makes this tall, skinny athlete’s story one of inspiration.

“Work can be pretty full on,” he explains. “We aren’t able to use machines because of the delicate nature of the work, digging up gas mains, so it’s all hand digging mostly.”

Let that sink in. If you ever feel too tired to train or wonder how you can fit it in around a 9-5 office job, remember the physical work this runner is doing each day, in all conditions, and still he manages to get the miles in and attend his club’s training nights.

“At least I don’t need to do any strength and conditioning work,” jokes the Northerner in true Northern fashion.

It’s clear from talking to Hardman that his positive attitude to life and appreciation for consistent training makes a big difference. “Consistency and always looking ahead is key,” he says. “Norman [Poole, his coach], is always getting me to think of the next session. I’ll be pushing hard midweek and Norman sees the bigger picture as I need to be ready to hit a key session on Saturday too. He’ll shout ‘That’s enough, you don’t need to go any faster on this one’.

“Before Norman started coaching me I wanted to make sure I was ready to put in the commitment too. It took a year of constant training before I was sure I wouldn’t be wasting his time.  “During my 20s I was on and off with running. I was fast and got some good results, but the consistency just wasn’t there.

“Yet I wouldn’t go back and change anything. That was just who I was at the time and it’s also part of the reason I can now dedicate myself to the marathon training. If you take it too seriously all of your life then you don’t always enjoy running in our 30s. I still love it now.”

The level of dedication to the clubs in the North of England is huge. The rivalries possibly more so, but Salford Harriers and Sale AC athletes alike train under Norman Poole and speaking to several of Poole’s athletes they all hold him in very high regard.

However the rivalries still come out in the road relays, cross country and any track meets.

“After the fall with my knee I took nearly two weeks off, but it was the National Road Relays that I really had to get the racing shoes back on for,” says the Salford Harriers man. “We had our strongest team for years and that showed in the result finishing eighth overall and we were delighted.   I was surprised at how little speed I’d lost after the time off with the knee. I’m running pain-free with it now and it’s given me the confidence to attack my shorter distance PBs in the coming months.”

With the nature of his work who could begrudge Hardman from missing training sessions with the club and doing his own thing, but yet he still has that desire to never miss running with friends and clubmates.

“Sometimes the boys will turn up at the door for a run and I’ve literally just got in and I’m still eating my dinner,” he explains. “I’ll still be chewing when I’m lacing up my shoes, but you get used to it.

“It can be tiring, but once you’re out the door it’s alright. It certainly helps to be part of a good group. Norman said he has only missed two club nights in 35 years of coaching and when your coach is that dedicated it inspires you to be the same.”

With his training, labour intensive work and two children keeping him on his feet, surely Hardman allows himself a treat in the evening and doesn’t be too strict on his diet?

“I eat a lot of pasta anyway, so plenty of carbs,” he says. “Looking back on last year and the start of this year I actually found that my diet improved a lot as the marathon training went on. With all the work you’re putting in you don’t want to jeopardise it by eating crap.

“I’ve got a sweet tooth though, I could literally eat a whole pack of biscuits with a cup of tea. Alongside work and training I’m working hard so refuelling is important so I don’t get too stressed about it.”

And he’s also not afraid to have a pint, but also is quick to do without when it really matters.

“When I’m training I’m happy enough to have a pint or two, but for Berlin [marathon] last year I actually knocked it on the head completely,” he recalls. “It’s the consistency you don’t want to interrupt in marathon training and I found it easier just to say no to the lads.

“But afterwards it’s important to let your hair down. A night out with running friends, school friends and, obviously, a nice night out with the missus are all a nice reward. Then I’m eager to get into training again.”

The enjoyment of the process, not just the destination, is a key takeaway from talking to Hardman. He has so much joy for training and racing, but running is not the be all and end all, even though he shows huge dedication to the sport.

RELATED: How I train: Carl Hardman