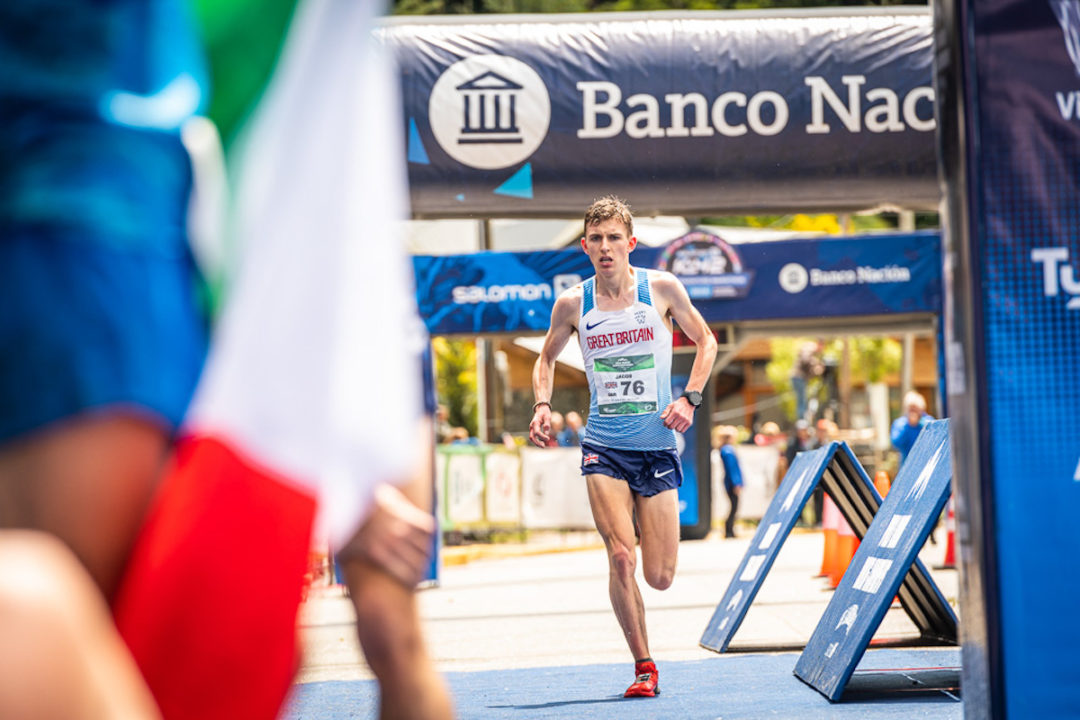 European Mountain Running Champion Jacob Adkin reflects back on 2019 and what a year it was for the youngster.

For a few years now I’ve had a bit of a dream to live in the Alps, to live in those typical Instagram photos that you can’t help but be awed by – dramatic peaks, twisting single path cut into the mountainside, and endless options for adventure. Last winter this dream visited my thoughts with greater frequency, almost bugging me.

What though was preventing me acting upon those thoughts? Maybe the fear that it wouldn’t work out, or it would not meet my expectations. Fear of not having enough money. Fear of the unknown. Then the idea of being in the same position a year later, having not acted, and when packing up and heading off may not be as straightforward, was far less appealing than the fears overshadowing the dream. So I took the plunge.

Every moment until the day I left I still wasn’t sure if I was doing the right thing.

The week before departing I took part in the Loughrigg fell race – a cracker of the mid-week fell series which this year coincided with one of the most incredible evenings in the Lake District you could imagine. Think award winning National Geographic photography material and that’s the kind of landscape we’re talking about.

Well, this did nothing for my conviction on the imminent plans and moving away from what is one of my favourite parts of the world. However, looking back now this fell race, on an immaculate evening, was a culmination of a winter’s worth of enjoyment in a place I am sure to return to. Starting with a storm

The summer started with a storm. Quite literally. I was in the land of exceedingly excellent espressos and peerless pasta. With wall to wall sunshine the sock tan line was already at a level I would be proud of at the end of a summer let alone the start of one. I began my season with a few weeks in Italy and in the ‘home of mountain running’, Malonno, a town passionate about the sport.

First though, I hoped to jump in at the deep end with the steep and quite technical Trentapassi VK. As race day came however, so too did the aforementioned storm. Waking up to the shutters being hurled back and forth against the windows, it was with trepidation I headed out for a pre-race shake-out jog, only to be thrown straight back through the door by the whirling wind.

With no respite forecast and race marshals unable to get onto the route due to much of it being frozen over, it wasn’t looking promising.

With great disappointment the race had to be cancelled. A few of us who had come over from the UK to race took the opportunity of better weather later that day to enjoy the trails the town has to offer, and the finest bottle of Aperol spritz money could buy.

I could not help but feel sad though. Over the course of my time there I had become more acquainted with the race organiser, his story, and his passion for the sport and the race he co-organises; they have put so much time and energy into growing this event.

Cancellation is sad for everyone

The enjoyment that the runners taking part gain is often the only reward that the team of volunteers receive, and ask for. It was saddening then to think of them when the decision was made to cancel the race. They, and so many other event organisers and armies of volunteers, do so much to keep this sport alive and growing, bringing delight and reward to so many people. I endeavour never to forget that.

Onwards we flew into the rest of the summer and my girlfriend and I were fortunate enough to call Chamonix, France, home for the season. Having spent a good amount of time there the previous year (and loved it) it was almost like going home.

With only a couple of weeks before the European Mountain Running Championships, I went over to Switzerland for the Neirivue-Moléson mountain race. An uphill only course, I used it in preparation for the championships.

These build-up races are funny though – you want them to go well but sometimes, weirdly, you don’t. It depends on your psyche; get the bad race out of the system before the big one, or boost your confidence (but conversely greater self-imposed pressure) with a good race. It was more of the former for me on this occasion.

A less than complete race here ensured that I did not place any specific expectations on myself at the European championships. I was enjoying running so much and living in a good place. I was happy in the mind, and full of enthusiasm for our team medal hopes at the championship. When you’re doing something for more than just yourself, the results are usually greater.

Once upon a time in Zermatt

That day in Zermatt, well, I can’t really describe that day in Zermatt if I’m honest! As much of a cliché as it is, it’s hard to believe that it ever really happened. A day when my legs were full of infinite energy of which I’ve never experienced before; a day when my mind was of pure calmness, even when I was struck by a horrendous stitch midway!

Losing the lead at that point could have lost me many more places on any other day, but at that moment my mind was strangely unwavering.

There was no panic, no looking back.

I knew, as the eventual silver medallist came past me, how much I wanted to cross the line first. Almost half a year has passed now, and I don’t think I’ve gleaned any further understanding as to why that run was better than any other, except from my state of mind.

What happened that fine day?

It was the conviction in setting out to achieve something greater than ever before, and crucially the enjoyment in something I do every day. We are at risk of over analysing performances, the good and the bad ones. I’ve found it almost impossible to replicate a successful preparation and race, but have been mindful that making the right choices along the journey is your biggest key to unlocking great preparation and greater results.

I spent the month before the championship enjoying a new kind of life in the Alps alongside another who appreciates it in a similar way; I had a relaxed outlook and therefore was in a position to reach that next level needed to fulfil a dream of reaching a podium.

From Zermatt it was to the Dolomites in Italy to climb into an amphitheatre of dramatic rocky peaks and ankle braking boulder fields. Then to Sierre-Zinal for what was billed by many as one of the deepest and most competitive fields ever assembled – a who’s who of the sport, it was quite something else.

A day and a fourteen-hour flight later I looked as though I’d badly applied a fake tan, the dirt trails of Colorado, USA, offering up some memorable adventures. After a two-week stint of exploration in this crazy place, it was my marathon debut… up and down a 4300-metre mountain. I can’t say it was pleasant!

This period of racing in the couple of months after the European championships was one of those times I’m sure many have had, when you’re just ‘not feeling it’ in training or racing. Without realising, I think I’d put all my eggs in the European’s basket. I wanted to perform to a high level at every race over the summer.

The motivation to do well at these subsequent events was there, but in reality, I struggled with energy and was hampered by in-race fuelling problems that can only be resolved with practice, time for which I didn’t have. I have absolutely no regrets however for taking those opportunities that I’ve been very fortunate to receive.

They have certainly shown up a lot of my weaknesses but that’s invaluable, and therefore a positive! I committed to too many big and longer races this summer, but it was only by doing this that I am able to gauge where I’m at and where I go from here. The European championship was an emotional and physical drain to a depth I did not comprehend until I put myself out there in a race again.

I am sad and annoyed that I wasn’t able to capitalise on the incredible chances I had, competing against the best in the world, yet it did help me realise that I don’t wish for my life and happiness to hinge on race results. I’m in a privileged position to be able to stand on the start line of any race, so remembering that and maybe inspiring a few people to try out the sport along the way is an honour enough. Step back and readjust

After taking a much needed step back to rejuvenate I went into training for the World championship trials with renewed vigour. All was going dandy until a virus hit, rendering running on a route without a convenience at regular intervals impossible… ideal in the week before the trials!

An intense debate with myself then ensued; was it sensible to race the trials in a weakened condition? In the end I decided against risking exacerbating and prolonging the illness and regretfully pulled out of the trials. After a nervous wait though I was delighted to gain a discretionary place on to the team.

The conclusion from pre-trip analysis was that the course in Argentina was to be a tough one. We hadn’t quite expected however the challenge of crossing a fast flowing, icy cold river, twice. Blue skies and sunshine during the week gave way to icy rain and high winds on race day, almost frightening us into running faster along the forest trails to avoid getting crushed by ominously creaking trees.

Many rivers to cross

An unfortunate incident during the second river crossing resulted in my teammate Andy and I both losing time in one way or another; I ended up submerged in the fast flowing water with the proposition, as I struggled to breathe, of descending the 700m of height back to the start a lot quicker than I’d expected.

With feeling in any part of my body virtually non-existent, and energy levels sucked away, it wasn’t the optimum second half performance I was after. Yes, it wasn’t ideal, but I’m not one to shy away from a challenge and do enjoy competing against the terrain put in front of me, even in this more extreme case!

With all the team making it around in one piece, with a great many incredible runs, it really was a fitting way to finish what has been a challenging but uplifting year.

This summer was more than just Instagram photos; it was a memorable story of my life that I shall always have. It wasn’t long after the final race before a warming pint was in my hand and we were toasting the end of the season and to a long-awaited break – the road trip continues.

2019: A year that surpassed all expectations
Fast10: Paul Navesey