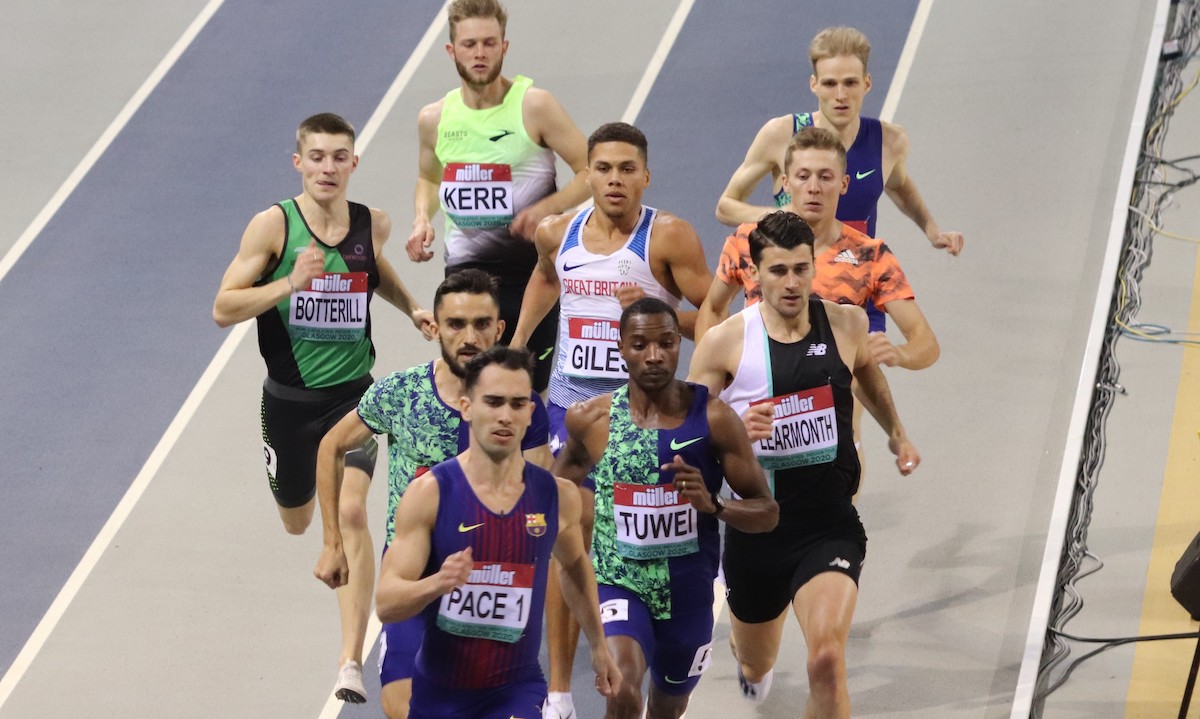 James Rhodes makes the most of the travel to Serbia and his extensive knowledge of athletics to bring a preview of the distance races due to take place in Belgrade.

As I type this, I am high in the sky on my journey to Belgrade and the World Indoor Championships. The competition makes its welcome return after COVID scuppered the 2020 (postponed to 2021) edition in Nanjing in China.

The Serbian capital’s Stark Arena provides a fast track and is well versed in competition after hosting the 2017 European Indoor Championships.

The action runs from Friday morning through to Sunday, so let me take you on a tour of some of the names to look out for in the distance events.

I start with a caveat, though; the entry lists do not distinguish between those racing and non-travelling reserves. I have done my best to weed out the reserves, but some may have slipped through. All entries are as at Tuesday morning. Marc Scott comes into the champs on the back of a fantastic European indoor record over 5000m. Photo: James Rhodes

The longest race on the track has the potential to be one of the best races of the Championships, with the field including the third, fifth and seventh fastest men in history. That’s three men who have run under 7:28 this year, and a further two who have run sub-7:32.

As overall winner of the World Indoor Tour, Lamecha Girma secured a wildcard for Belgrade providing Ethiopia with three spots for the event. He may be a steeplechase specialist, but the Olympic silver medallist has demonstrated his abilities indoors with wins in Lievin and Torun against strong fields.

Girma will be joined by compatriots Berihu Aregawi, the 5k World Record holder and fastest man over 15 laps in the world this year, thanks to his 7:26.20 in Karlsruhe in January, and Olympic 10,000m Champion Selemon Barega.

Girma and Barega have raced each other three times this season, Girma winning twice and Barega taking the most recent duel in Madrid.

Whilst there is high probability of an Ethiopian podium lock-out, which would be a first, Spain’s Adel Mechaal should not be discounted. He has had a fantastic indoor season, including a European Record (7:30.82) in New York, and will be looking to get onto the rostrum.

Home athlete Elzan Bibic has set National Records each time he has raced indoors this year, and I look forward to seeing New Zealander George Beamish race after his win at the Millrose Games in a National Record (7:39.50). Staying in Australasia, Belgrade will be Matthew Ramsden’s first ever indoor race.

Thanks to their one-two at the British Indoor Championships, Marc Scott and Jamaine Coleman will wear the British vest, with Tom Mortimer a non-travelling reserve. Marc’s only 3000m this year came at those (always tactical) championships, but with his last kilometre speed alongside his European Indoor Record over 5000m (12:57.03) he will be looking for a good performance after what he called a “disappointing Olympics”. The women’s 3000m is the only track event that will be run as a straight final and is an event that has been dominated by Ethiopia in recent years, a trend that looks set to continue with the trio of Dawit Seyaum, Ejgayehu Taye and Lemlem Hailu competing.

Lemlem has a 8:29.28 PB but has not raced over the distance this year (her spot guaranteed after winning last year’s World Indoor Tour). Dawit and Ejgayehu are faster on paper, however, having run 8:23.24 and 8:26.77 respectively in February.

Americans Alicia Monson and Ellie Purrier St Pierre may provide a strong challenge, with both showing great form in recent weeks. Alicia had an impressive win at the Millrose Games (8:31.62 PB), wearing On’s new spikes. Keep an eye out also for Gabriela Debues-Stafford, the former training partner of Laura Muir, who set a Canadian Record this winter (8:33.92) and will be looking for her first global medal.

European Indoor Champion Amy Eloise Markovc leads the British duo alongside Amelia Quirk, who has taken to indoor racing well after making her debut last year. Amy Eloise is one of many in the field to have set a PB in 2022. It feels fair to say that it is not every day you get to see a World Record holder in action, particularly given the age of some track records. Those in the Stark Arena may be in for a treat as the 1500m is headed up by World Record holder Gudaf Tsegay.

Her 3:53.09 run in Lievin last year is over two seconds faster than anyone else has run, and the Ethiopian has looked in equally fine form in recent weeks. A heavy fall in the opening laps derailed a record attempt at the mile in Lievin (a race she still managed to comfortably win), but she responded well to run the second fastest indoor 1500m in history – second to her own WR – a fortnight ago in Torun.

The 25 year old is yet to claim a major gold (with Olympic, World and World Indoor bronze), and one would bet good money that this will be the competition it happens.

She is joined by compatriot Axumawit Embaye who, in contrast to some of the athletes to have emerged on the international circuit in the past couple of years, has been a household name in athletics circles for a number of years – on the European circuit for a decade now. It has been a good indoor season for Embaye, with highlights including a 4:02.12 clocking in Karlsruhe in January.

Ellie Purrier St Pierre is one of a handful of athletes entered for both the 1500m and 3000m, alongside Jessica Hull.

It is hard predict who might complete the podium (which is why I don’t do predictions!), however I am looking forward to seeing how Americans Heather Maclean and Josette Norris runs after some good performances over the past twelve months.

From a British perspective, all eyes will be on Erin Wallace as she makes her senior champs debut after an excellent start to the year, culminating with a PB and Belgrade Q at the Muller Indoor GP. In case one 1500m World Record holder wasn’t enough, Jakob Ingebrigtsen headlines the men’s race in what will be his first outing since his 3:30.60 in Lievin that broke Samuel Tefera’s historic mark.

The Olympic Champion needs no introduction, and he will face the Ethiopian who finished almost three seconds behind him in that race in Lievin, although that time is the second fastest in the world this year by a comfortable margin.

This race has historically been a tactical and slow affair, but I can’t imagine the Norwegian allowing a slow pace to unfold come Sunday’s final.

Abel Kipsang will also likely play a role in the final, the Olympic fourth placer won in Birmingham last month (3:34.57) and has also run sub-1:46 at altitude over 800m.

After Piers Copeland declined his automatic selection as winner of the British Indoor Championships, it will be Neil Gourley and George Mills who run in the British vest.

Neil has improved his indoor best to 3:35.32 in February and finished second in the trials, whilst George has looked excellent in his races this year. He was the first Brit home at the Muller Indoor GP (3:36.03 PB), a race that acted as a potential preview of the British Championships – where Mills did not run due to a niggle.

Robert Farken, training partner of George Mills, and Oliver Hoare (who won the Millrose Games mile in 3:50.83) will both also look to make the final.

Adel Mechaal (fourth fastest this year of the entries) and Elzan Bibic are also entered, but I think it unlikely both will double up. One could argue that the women’s 800m is the event with the most likely British gold medal via Keely Hodgkinson. The 20 year old goes to Belgrade almost a second faster than the rest of the field, both by PB and SB, after her 1:57.20 at the Muller Indoor GP in Birmingham. That is the fastest time indoors since the day the World Record was set, which spookily was the day Keely was born.

Whilst Keely has demonstrated her tactical astuteness as well as raw speed, it will not be a straightforward task as three other women entered have run under two minutes this season; Natoya Goule (1:58.46), outdoor World Champion Halimah Nakaayi (1:58.58) and Catriona Bisset (1:59.46), with 2022 being the latter’s indoor debut.

Jenny Selman completes the GB entrants after her 2:00.70 PB and excellent first place at the trials. This will be her senior GB debut, her last British vest coming at junior level back in 2009. A prime example that the athlete journey is not always an instant one.

Finally, with PBs of 1:58.19 and 1:58.29 respectively, it would be remis to not mention Habitam Alemu and Ajee Wilson in this preview. Alemu has not raced the distance yet this year, whilst Wilson will be looking to improve on the silver medals she took home from the last two editions of these championships. Her best this year is ‘only’ 2:01.38, although she has won all of her 800m races in 2022. In previewing last year’s European Indoors 800m, I neglected to mention the eventual winner (Patryk Dobek). He does not go in Belgrade, and the task of predicting a winner come Saturday’s final is no easier as, unlike the women’s event, the men’s four-lap race has no clear-cut favourite.

Writing through a British lens, I will start with Elliot Giles – the fastest in the field on paper (but then, he is the second fastest ever indoors behind Wilson Kipketer). He has shown excellent consistency this year, finishing first or second in every race, with his last three (non-British Champs) races being within 0.01s of each other. Giles finished fourth in Birmingham in 2018 and will be looking for his first global medal.

His rivals are expected to include Spaniard Mariano Garcia. He had an excellent start to the year with a win at the New Balance Indoor GP, but was beaten in his most recent races at the Spanish Championships and World Indoor Tour in Madrid (by Giles). Expect to see his motorbike celebrations if he takes gold.

Garcia’s compatriot Alvaro de Arriba joins him in Belgrade, as Spanish Champion and having taken the European Indoor title in 2019.

Two Americans will take to the track, Bryce Hoppel and Isiah Harris. Hoppel was fourth in the World Championships 800m in Doha in 2019, and booked his spot in Belgrade with a comfortable looking victory at the USA Champs (1:45.30).

The British contingent is completed by Guy Learmonth and Charlie Grice, the latter finding himself in Belgrade thanks to Giles’ World Indoor Tour win and resultant wildcard.

In short, it is impossible to call how this one will go!