Ciara Mageean and Phil Healy among winners at Irish indoors 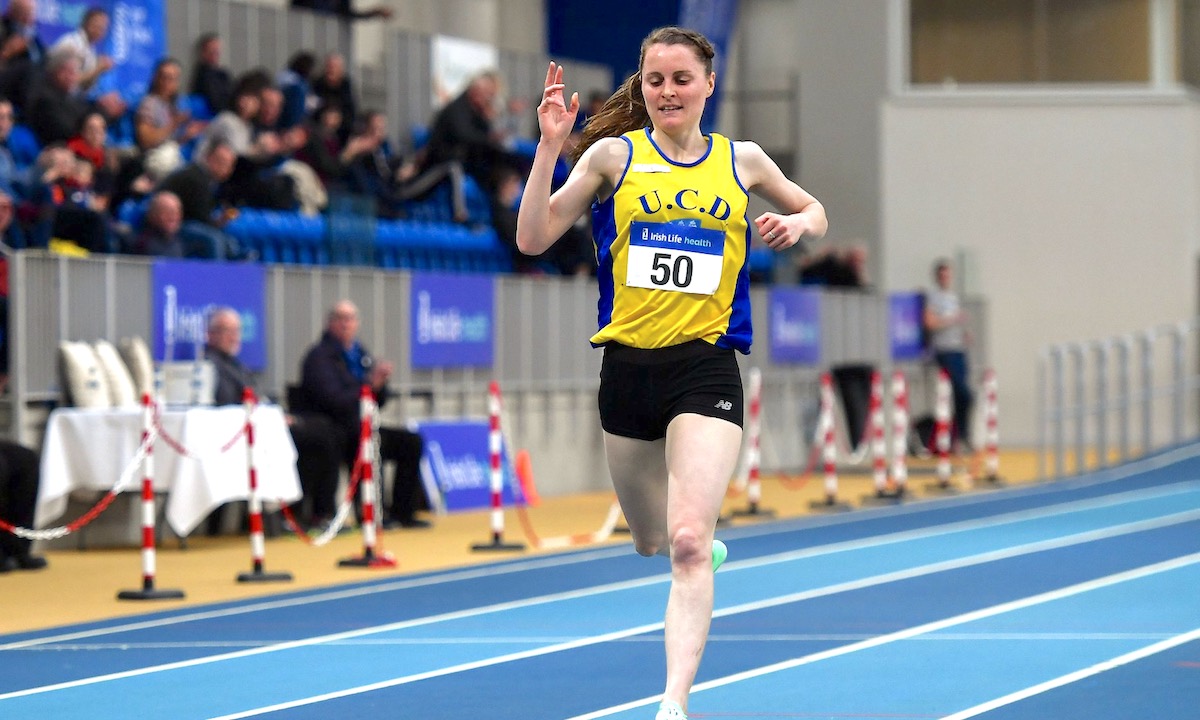 Ciara Mageean continued her flying form to win the women’s 3000m crown at the National Indoor Championships in Abbotstown over the weekend (February 16-17), while Thomas Barr was sensationally bumped out of the 400m.

On Saturday, in the women’s 3000m final, Mageean nailed down a European Indoors qualifying mark with a time of 9:02.57.

Mageean was in flying form after setting a new Irish indoor 1500m record in Athlone three days earlier. The Irish indoor record of 8:43.74 for 3000m was set by Mary Cullen in 2009.

There was drama in the men’s 400m final on the second day of the Indoor Championships. Just after the ‘break’, Barr and two other athletes, who were just behind the race leaders, attempted to get through the same small opening.

Raheny’s Brandon Arrey held on to his position on the inside, but Barr found himself shooting out to lane six and dropped out of the race. You can watch the men’s 400m final below.

“That’s indoor running for you,” said Barr afterwards. “I didn’t get a good start and that left me in a messy position at the break. Outdoors you don’t have a break, so I’m not used to it.”

Barr, who already has a 400m qualification mark for the European Indoors in Glasgow next month, added: “I don’t think I’ll be winning any medals [in Glasgow] so I’ll just go out and enjoy it.”

Winning the 400m was Cillin Green of Galway City Harriers in 47.19. Andrew Mellon of Crusaders AC, who survived the mid-race bumping, held on for second in 48.02, with Arrey third in 48.15.

In the women’s 400m, Phil Healy’s time of 52.81 secs broke her own championships record of 53.10 set last year. The Bandon AC athlete is aiming for a place in the final at the European Championships having missed out by the narrowest of margins at the World Indoors last year.

“I’m hoping to make the final, but you also need a bit of luck when it comes to championship racing,” said Healy.

“I’m hoping for a good time in Glasgow – the heats, semi-finals and final are all on the same day so it’s going to be tough,” said Ojewumi.

“I’m just happy to have won the race,” said Travers. “At one point, I was in third place and thought I’d blown it.” Next up for Travers is the European Indoors, and he added: “I’m hoping maybe to make the final. For that, I’d need to run around 7.50. My best is 7:55 and so I’ll be aiming for a fast time in the heats.”

Cruising to victory in the men’s 800m was Mark English of UCD AC. English bided his time until the bell and then took off, with Zak Curran of Dundrum South Dublin AC chasing hard. Winning the women’s 800m in 2:04.15 was Siofra Cleirigh Buttner of Dundrum South Dublin AC, who is back in Dublin after her four-year stint at Villanova University ended last summer. She’s another athlete who will compete in Glasgow.

“It’s been a tough eight months for me I’ve been back and forth a lot from the USA looking for a better training set-up,” commented Cleirigh Buttner afterwards. ” Still, I ran 2:03.02 in my first race this year which wasn’t bad and it can be good to be under the radar.”

Second in the race was Claire Mooney of UCD AC. Mooney had hoped to run the Glasgow qualification mark of 2:04 in Athlone the previous Wednesday, but a timing malfunction robbed her of her chance. She ran 2:04.67 in Abbotstown.

A surprise winner of the 1500m was England-based Eoin Pierce of Clonliffe Harriers who out-sprinted Eoin Everard of Kilkenny City Harriers and Kieran Kelly of Raheny Shamrock for victory in 3:55.54.

The youngest winner of the day was 16-year-old Rhasidat Adeleke of Tallaght AC who took the women’s 200m title with a time of 24.13. In the men’s race, Leon Reid of Menapians AC was winning his fifth indoor title after finishing fourth in the 60m earlier in the afternoon – a race he had won for the previous two years.

“I’ve had a few little niggles and didn’t have the explosive speed I normally rely on,” said Reid. “But I’m happy to have won.”

Next up for Reid is a two-week training camp in Malta with a group including Phil Healy and coach Shane McCormack supervising.

He added: “My target is qualifying for the World Championships – but before that, the World Relays, where we hope to qualify an Irish team for the Olympics.”

Winning the men’s 60m hurdles for a second year was Matthew Behan of Crusaders AC in 7.96 secs.

Highlight of the field events was victory for the veteran Sean Breathnach of Galway City Harriers in the shot with 16.22.

On the opening day of the competition., Sommer Lecky of Finn Valley retained the high jump title for a third year. In an absorbing contest with Phillipa Rogan of Sli Cualann AC, the bar was set at 1.89 before both women went out.

By that stage in the competition, Lecky had succeeded at 1.86, while with one one failure at 1.86, Rogan, who had 1.83 to her credit, put the bar higher. When that height proved a step too far for both women, victory went to Lecky, who took silver at the World U20 Championships last summer with a leap of 1.90 – an Irish junior record.

Retaining the women’s shot title for a third year was Michaela Walsh of Swinford AC. Since her move to Dublin last autumn, Walsh has had well-publicised difficulties finding suitable training facilities but a 14.44m effort was enough to give her the title.

Winning the walks titles for a third year were Kate Veale of West Waterford and Alex Wright of Leevale AC. Star of the day was Ruby Millett of St Abban’s who set a new Irish junior record of 6.20m when winning the women’s long jump title.

The race was won by won by Topi Raitanen in a sprint from Adam Craig of Inverclyde AC. Times were 13.43 and 13:45.

Kevin Dooney of Raheny Shamrock was 16th in 14:08, David Flynn and Colm Rooney, both Clonliffe Harriers, were given the same time of 14:23 for 30th and 31st position. Elsewhere, Shane Healy clocked 15:20 in Armagh to set a new Irish over-50 record.

Emma Mitchell was best of the Irish in the women’s 3km in Armagh, where English athlete Steph Twell equalled the course record of 8:59.

In a race dominated by British visitors, Mitchell of Team Nike finished eighth in 9:25.

Scotland was the winning team ahead of England, Ireland and Northern Ireland/Ulster.

A full report from Armagh can be found here.

McClintock won the race in 17:52 with Tonosa six seconds adrift for second and Yared Deresa of Carrick Aces AC third in 18:09.

In an American double, Joanna Thompson won the women’s 4000m in 13 minutes exactly. Nessa Reilly of Dunleer AC just beat Holly Brennan of Cilles AC for second place with the pair, both juniors, timed at 13:39 and 13:50.

Dunleer AC was first of the teams followed by Dundrum South Dublin AC and Drogheda and District AC.

Laura Graham and Colin Griffin ran the quickest times at parkrun events across Ireland on Saturday.

Graham ran 17:28 at the Castlewellan event, while Griffin posted the fastest men’s time after running 16:19 at the St Anne’s parkrun in Dublin.

The Irish parkrun top 10 can be found here.