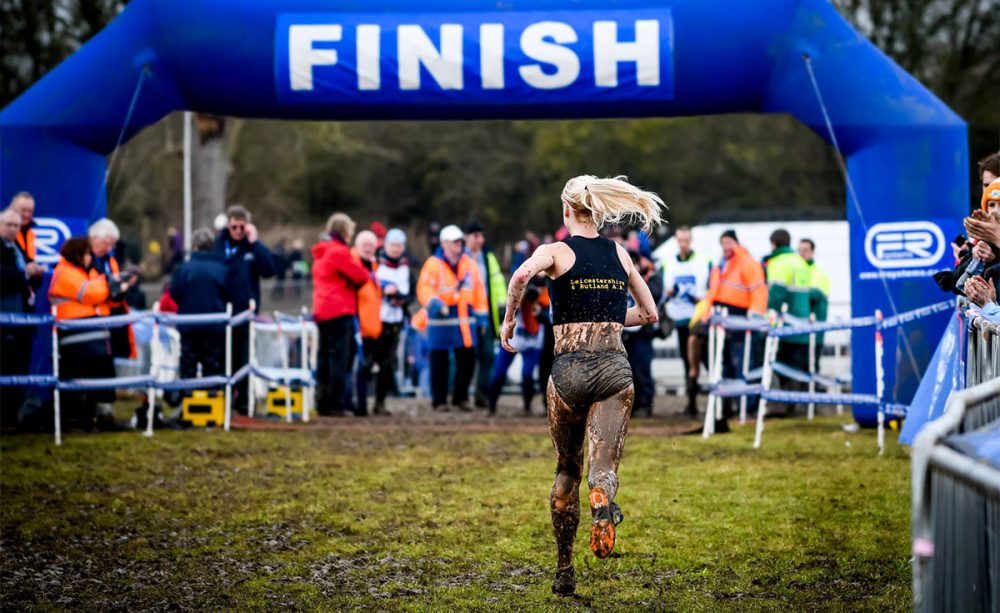 After last year’s mishap at the Inter-Counties, Gemma Steel returned to Loughborough hoping to cross the line smiling and with both shoes this time.

There is no better venue to conclude the cross country season than Prestwold Hall on my favourite stomping ground in Loughborough. A massive thank you must go to landowner Edward Packe-Drury-Lowe for allowing cross country runners free in such beautiful settings.

Ahead of the Inter-Counties and my final cross country race of the season, I took some comfort in knowing I had home advantage. That was until I saw the mud!

For readers who didn’t hear my tail from 2017, I lost not one, but both of my shoes in the mud bath at Prestwold Hall – and still somehow managed to finish third. An act of braveness or sheer madness you might think and it’s debatable which one.

But luckily I lived to tell the tale and yes I did manage to reclaim both shoes afterwards. Last year my feet took quite a pounding especially on the gravel path leading toward the finish and sheer determination and good agility got me through that day.

It was no mean feat, however, I am not too sure if my shoe sponsor New Balance were impressed.

This time I came even more prepared. Armed with stronger duct tape I wasn’t about to fall victim to the mud again.

I even visited and inspected the course the day before and it was a good thing I did, because the start and finish had been moved, and now there was a ditch after the first half mile which would be tricky to negotiate and an uphill finish to add.

After also walking the course on the morning and rain overnight it was as clear as mud I was going to have to watch my feet very carefully!

On paper, this seemed my ideal course as I am more of a strength based runner, but it’s also down to how you feel on the day, and on this particular day my stress levels were at an all-time high.

Even getting ready and warming up was an ordeal as images of last year flooded back. These anxious thoughts played in my head as I changed my spikes and tried to keep calm putting my number on despite hands shaking.

Taping my shoes was the main priority and I wrapped the duct tape around several times, almost 10 in total. But I was still convinced I would need super glue or something stronger to keep them on!

Panicking on the start-line

I got to the start line with five minutes to spare and lined up in the Leicestershire pen with the best intention of keeping calm.

However, I had a last minute wobble and after a slight panic attack, I irrationally started pulling my tape off ready to do them up even tighter. But there was no time!

I asked a race official for some scissors and this was met with a negative response. I realised I would just have to tuck the tape into the back of my shoe and just hope not to trip up, but I was convinced I would lose them again.

I had no choice but to switch off and go into autopilot mood waiting for the inevitable displacement of my shoes.

As the gun went off I bit the bullet so to speak! I started at the front and with the best intention of getting out of trouble early on, but I found myself lagging and was probably not even in the top 20 after 800m into the dip. Unlike me, but at least I was being sensible and keeping focused. Working my way through the field was slow progress and my competitive instinct didn’t really kick in until a mile into the race after which I eventually got to the front, where I needed to be.

The main contenders were all there, headed by national champion Phoebe Law who was running metronomically at the front and keeping well out of trouble. Abby Donnelly was in hot pursuit, alongside my Leicestershire teammate Amy Griffiths.

I made a move around a tight corner and swung round a post for momentum as I tried to steal a march on the others. It proved to be a good tactic as I edged my way to the front for the first time on the first small lap.

This was a nice part of the course which wasn’t covered in mud so I decided to try and break the field up a bit with a slight surge. This worked and soon it was down to myself, Phoebe and Abby chasing.

At the halfway point I knew tell I wasn’t going to have it all my own way with Phoebe sticking to her task like glue. Gritting my teeth and trying to hang onto her plus my shoes was hard work on the unforgiving course. The up and downhill sections might as well have been an ice rink and at best all I could do was proceed with caution whilst trying to stay in contention.

As the race progressed I was starting to flag and to add insult to injury my stomach had started to cramp. All I could do was focus on putting one foot in front of the other and keeping upright. A tall order when your legs and whole body feel like lead, but I just had to go to a happy place. I visualised last summer when I ran the Prestwold colour run, which was the same course, and thought in comparison to today’s conditions, getting splattered with paint was like Disney Land.

I also thought about the Owner of Prestwold, Edward who regularly runs the course barefoot, by choice I may add, and how funny it would be to see him running in this.

At three miles Phoebe pulled away and I was left battling it out for second place and my thoughts turned to the threats coming from behind me.

Soldiering on, I did well to hang onto my position and thankfully still be in one piece as I crossed the finish line with both shoes.

RELATED: Cross country is a true test of strength, grit and determination

Congratulating Phoebe on first and Abby on a great third it was safe to say we’d all seen better days but at least we got free beauty treatments thanks to the mud.

Full marks to Phoebe for her effort and determination. I was honoured by her post-race comment that she was terrified of the thought of me chasing her. A kind compliment from a terrifically talented runner and it means a lot to hear that. The respect is mutual.

Feeling more like the old warhorse rather than the young whippet these days, it’s nice to know that I can still compete, but it doesn’t get any easier chasing these young runners.

Phoebe is definitely one to watch for the future after doing the dream double, plus the South of England champs, all at the age of 21. It’s a special achievement and it brought back memories of 2012 when I won the National and Inter-Counties.

On the podium, Phoebe was also awarded the British Athletics Cross Challenge title. It seemed I’d lost out in a draw after finishing on equal points, with the verdict given to my fellow competitor on a countback after the win in the grand finale.

Finishing second at Milton Keynes, third in Liverpool and second in Prestwold, I definitely had a consistent cross country season and somewhat unlucky to miss out on overall title.

Needless to say, I was pretty disappointed but accepted defeat graciously. Then rather bizarrely a few days later I received an email to say the scores had been counted up incorrectly and I had in fact won by a single point. I was over the moon, I was the Cross Challenge champion after such a long time in the waiting.

I didn’t see it coming but that’s what I love about cross country running. It throws up all kinds of thrills and spills and just goes to show that even if you don’t win the battle you can still win the war.