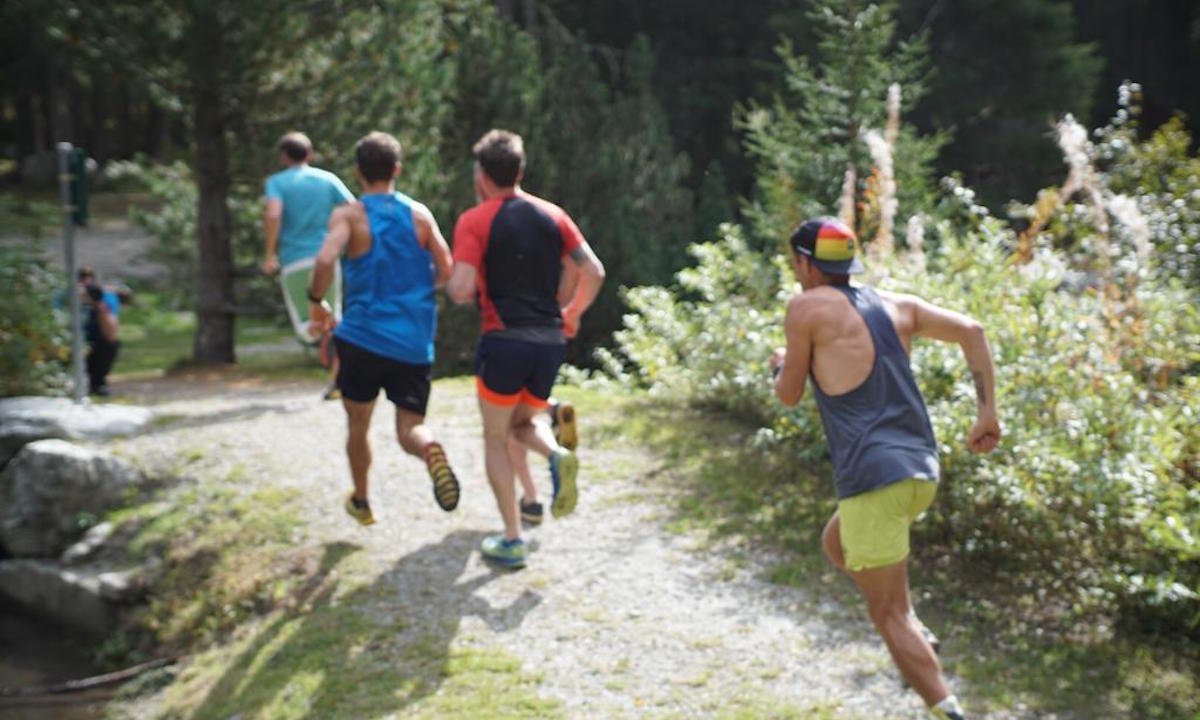 Running with other people is one of the joys of being a runner, but not everyone is perfectly matched to the people they enjoy speeding through the miles with.

Whether you’re reading this as the, we hope, humble faster friend or someone who likes to train with people a bit quicker, there some advice for making every running partnership a little easier.

It might just be that one of you is returning from injury, building up post race or simply accepts that the genetic lottery was on your mate’s side (or all of the above). Just because your friend is going a little swifter at the moment doesn’t mean you have to stay at home.

The main thing to be aware of is not to do every single one of your runs too hard. As we’ve often said before on Fast Running, keep those easy runs easy. It’s something Nigel Martin has put his success down to as well (and he’s one of the fast people I’m referring to myself as I write this). The power of the group is something often very visible in Ethiopian or Kenya training. Photo: Girls Gotta Run Foundation

You have a choice

If you’re the faster of the two (or more) runners here, you have a choice to make. The first option is to knacker everyone else out. You don’t have to be much faster to turn the screw on everyone else, you’ve done the hard miles to get there so why can’t you enjoy the heavy breathing of your peers as they drift away from you?

That might work for a run or two, stroke the ego and then leave you running solo. If that’s what you wanted, then go for it.

If you were to run those outings a little easier, what will happen? Will your PBs disappear? Is 20-30 seconds a mile the difference between a run helping and being worthless? I don’t think so.

Keeping the easy runs a little easier, maybe even just ramping up a little towards the end and adding some strides in, can make it a valuable run for everyone and not destroy your slightly slower friends. It allows you to go that bit faster in harder workouts or be fresh enough to go out for an extra easy to steady run on the same day. It can also help get you out in all weathers. Photo: Dirty Runners

Same goes for the slower runners

As a slower runner in this kind of situation you also have a choice. It’s been harming your ego or your energy levels. You can say “can we go a bit easier?”

Now your training partners may see this as a sign of weakness, turn the screw and leave you in the woods alone. Make sure you know the route home. A short while ago a group run in Italy was actually an impromptu race and we dropped one guy within a couple of minutes. I’ve not seen him again to this day. He might still be in those woods.

That day I knew it would be fast for me, with younger, quicker athletes training for shorter races on their favourite terrain. But it was in my plan as a steady effort, not as easy run. It ended up almost as a session and the rest of the week then got changed accordingly.

If you do end up on a harder run than planned, for you anyone, then take that into account the next few days. Don’t just rock up at your interval session the next day and expect the legs to be happy about it.

Fuel for the latter stages

If it’s a longer run you’re sharing with others then fuel like it’s race day. You can only hope they haven’t brought any gels again and if you hang on for the first half they’ll start to bonk a little. It’s what I did with Dan Lawson on the Jordan Trail.

Then you are left with a real decision. Do you teach the now-bonking speedster a lesson in pacing, fuelling or humility? The temptation is to start half-stepping and feel good about yourself when they fade back. The sensible thing is to chat through it and slow down a little for them.

The foolish thing is to help them with some nutritional advice. Then next time they might drive you into the ground the whole time. It is the friendly thing to do as well, as it helps them with racing, but it’s a gamble.

What about workouts? Running with faster people when you have to work hard will make you work harder, most of the time.

There are a few good sessions, like paarlauf sessions, where you run in a loop and one runner rests whilst the other recovers. As you meet each time on the loop the role changes. This does still mean the slower runner has longer efforts and shorter recoveries, but you have more work to do right?

If you’re not on the track, which keeps you close enough to work together anyway, then there are some tips for training in pairs or groups. The AB Training group are a great example of runners being stronger together, Photo: Phil Westlake (@westlake1953)

Using a set distance or hill means you’ll never be miles apart. The stronger runner might just do some extra reps or take a little more recovery each time. Have a set starting and finishing point for each effort and exchange that helping smile as you jog past.

The other choice is working to time, with the faster runner turning around when finishing and everyone regrouping for the remainder of the recovery. You could even run past the group whilst recovering and give yourself a staggered start. Always good mental practice to be the one chasing for a change.

Breaking it up can help too. When training with Nigel Martin in Portugal a few years back he would do a 30-40 minute tempo run at his threshold effort and I would do 6 x 5 minutes. That way I had some recovery each lap of the old XC loop and could then share a few more minutes pacing. It probably meant I was still working a little too hard, but I didn’t just watch Nigel disappear into the distance at the start of the workout.

The benefits to training with others is real. You might even be doing so to get a bit faster on your easy runs, but watch out for digging too deep too often.

From faster paces to bigger motivation, the group, or even a pair of runners, are stronger together.Don’t be afraid to run with quicker or slower people. It might not be something you do every day, but there is often a lot of value for all the runners involved. How many speedsters do we know that would benefit from the easy runs going a bit easier too?

Last, but not least: open questions. Get them talking and it might help a little. Don’t let those with a quicker cadence get away with quick answers.

At the very least, it good to have a natter and share a cup of tea afterwards.

If you enjoy the writing of Robbie Britton then check out his book, 1001 Running Tips, available for pre-order now. Living with an Olympian
Running with Mum