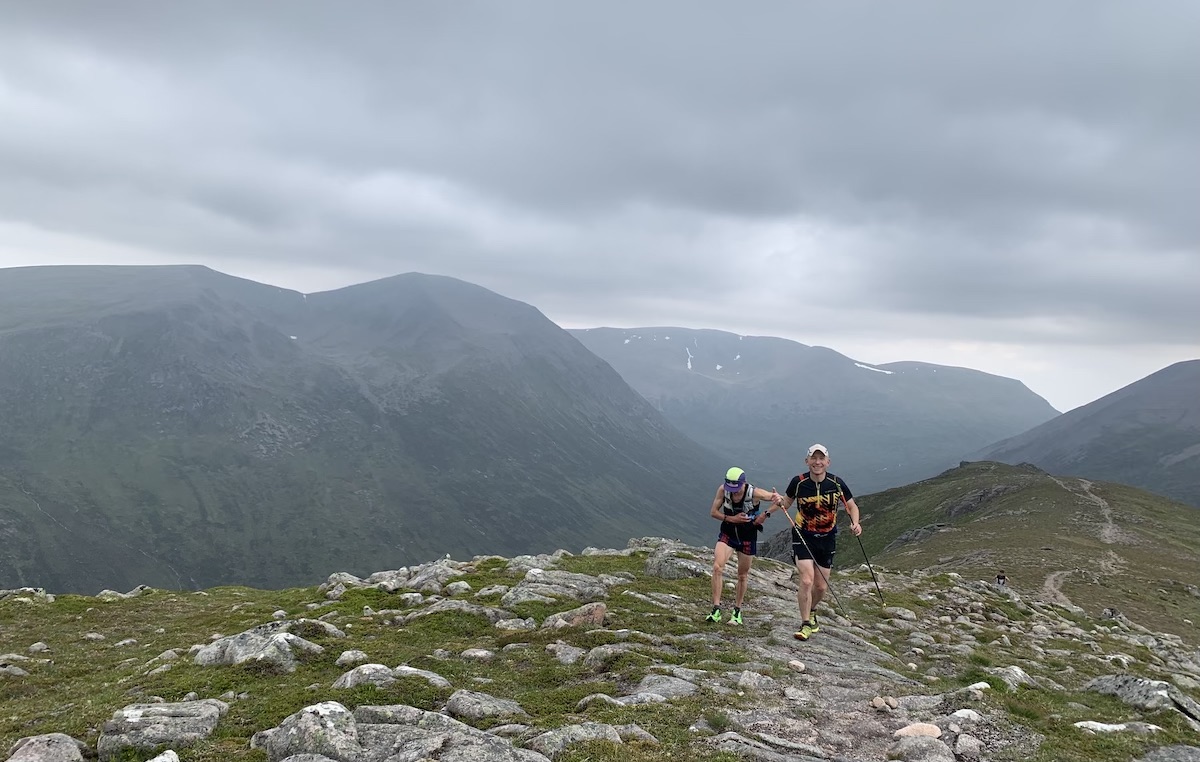 Recently Kim Collison quietly ran another astounding record in the hills. Ross Brannigan had the pleasure/challenge of supporting a Munro record attempt.

A few weeks ago, top-of-his-game ultra-cum-fell runner Kim Collison slid into my Instagram DMs: “Afternoon Ross. I’m planning a crack at the 24 hour Munro’s record. Eek! It’s a beast of a route. Don’t happen to be free 3/4th July if weather is kind?”

For the past few years, Kim has slowly been gaining prominence in the fell running community as a guy who, when he puts his mind to it, can conquer pretty much anything – somehow with a unshakeable grin on his face, hence the name “Smiley Assassin”.

The winter Bob Graham record, the Paddy Buckley record, the Lakeland 24hr record – the man loves running in really big, lumpy circles these days, having developed a name for himself in the ultra trail running scene representing GB.

What are the chances?

A week or so later, Ally Beavan (pint-puller, Broken-writer and dot-watcher extraordinaire) and myself were jogging around the Cairngorms, surveying the route Kim was to take on 3 July, discussing other potential add-ons and Kim’s chances of getting the record.

The 24-hour records are a fascinating challenge – cruel and requiring a certain degree of gambling to ensure you can not only add more peaks but return to your starting position within the time. Kim on his Lakeland Fell record last year, showing us all how to run over rocks. Photo: Steve Ashworth Media

The Lakeland 24-hour record is a pick n’ mix of a challenge: The Bob Graham Club decrees the route is an extension of the classic Bob Graham Round – 42 peaks in the Lake District – plus a menu of other summits that are of sufficient distance or height change from its neighbours.

The Munro 24-hour record is a little more open, with the location having changed a few times over the years: Glen Nevis (first with the Tranter and then Ramsay’s Round), Glen Shiel (with Jon Broxap’s 29 Munros in 1988), before coming to rest in 2017 in the Cairngorms.

The concept is the same: Start and finish in the same spot, touching as many tops as you can in the time.

Kim’s plan was to add on the obvious 33rd summit of Braeriach. Simple though it sounds, it would eat around 45 minutes to an hour into the schedule, with a sort of out-and-back from Angel’s Peak to Braeriach and then over rough ground to Monadh Mor.

It was daring, but by jings it just might work.

How can we help?

Our recce weekend had shown Ally and I – who were tasked with support on leg two – that an initially brutally steep ascent of Beinn Mheadhoin from Glen Derry was followed by a gradual descent to Loch Etchachan. An out-and-back to Derry Cairngorm preceded a climb to Scotland’s second highest summit, Ben Macdui, before a bouldery descent to the final climb over Carn a’Mhaim.

The last part was an adrenaline pumping, heathery, hold-onto-your-knickers descent to Corrour Bothy, where the third pair would take the Kim-shaped baton over the next range of Munros.

At 8.30am on a bright Saturday morning, Ally and I started our run from the Coire na Ciste car park, skirting the top of Cairn Gorm and dropping down to the Fords of A’an refuge.

Kim had started at 6am, led out by ultrarunner madman Rob Sinclair (Sinco) and speedster Hamish Battle, who I recommended to Kim before finding out from Ally – halfway up Cairn Gorm – that this would be Hamish’s longest run ever. Sorry, Hamish.

It is rumoured that Kim can see paths that mere mortals cannot even imagine. Photo: Ross Brannigan

Problems tracking the fastest man in the Cairngorms

Annoyingly, Kim’s tracker wasn’t updating, and we’d soon be without signal. As we arrived at the refuge, I filled my soft flasks along with Kim’s. He was set to arrive in Glen Derry around 10.15am. It was about 9.40am when we reached the refuge – pretty good timing, we thought.

Ally had continued ahead of me as I filled the bottles. I trotted along to catch up, but noticed he suddenly had taken on the running gait of a meerkat, his head up and looking around the glen.

‘What the heck’s he seen?’ I thought, getting a little anxious that we’d missed Kim, Hamish and Rob. For Hamish’s sake, I really hoped we hadn’t. Then a shout came, an inaudible babble that bounced around the glen.

“Shit”, Ally said as I caught him.

“Nah, we can’t have missed him”, I tried to reassure him (and myself). “He’d have to be about 40 minutes up for us to not have spotted him.”

We called back to the disembodied voice, but our cry just echoed around an empty glen. It was around 10am now.

Ally swore again: “We’d better move.” I valiantly volunteered to hang back, just in the off-chance they might be behind us. It was also a way of me ducking out of having to chase Ally, who had ran a Ramsay Round just a couple of weeks earlier.

A realisation that led to a sprint

Genuinely, though, I did glance back to Beinn a’Chaorainn until 10.15am before realising they must be ahead. I turned to sprint up Beinn Mheadhoin – well, a sort of exhausting on-the-spot bounding that is all you can muster when the gradients hit 30% and you are in the middle of a sea of heather.

Tearing up the heathered slope and using the undergrowth like a net in a CrossFit event, I followed the small blob that was Ally up the Munro. Lungs bursting, legs squealing, ptarmigans bursting out the heather like Feathery Explosive Devices, I chased him up that grotesque hillside.

Ally disappeared out of sight long before I finally crested the climb, stumbling onto the lunar-like summit of Beinn Mheadhoin. Without much hanging about, I trotted on, looking ahead for any distant dots.

I thought I might catch them on the return from Derry Cairngorm, but after a few minutes looking around decided they must still be ahead of me. By that time, my phone had caught signal: Kim was at least 52 minutes up on schedule. He was flying. What is Kim’s secret weapon? The smile, of course. Photo: Ross Brannigan

Morale was ebbing somewhat. I skipped the ascent path of Macdui, instead heading to the descent line just in case I could catch them, but there was no one around.

‘Maybe Kim didn’t exist’, I wondered ‘Maybe I have made up this whole thing.’

I dropped a text to the team: I am coming down. Can’t find them.

Half-dead from my effort across the plateau, I nestled into a slow walk up to the summit of Ben Macdui. As I rounded a lump on the hill, I looked left…

And there they were! Rob, Ally and Kim. Hamish, I discovered, had bailed at Beinn Bhreac and – never one to turn down an enormous day in the hills – Sinco had happily carried on. Thank God he did, else we’d definitely not be on Kim’s Christmas card list.

Trying to make yourself useful

Suddenly, the adrenaline was back. I joined the party as they skipped down Macdui. Kim was in fine form, moving as quickly as a normal person would on a nice 2-4-hour run in the hills. Except he was doing it for 24 hours.

“How are you doing, Kim? Do you want anything to eat?” I asked.

“One of those gels would be great”. I grabbed an OTE gel and, in my attempt to be helpful, promptly ripped the entire thing in half as I tried to open it. Red, berry-flavoured glucose exploded everywhere.

Great job, Ross. Thankfully, he was on leg two and running well, so it was all good fun. Ally issued another gel and I tried to remove the sticky mess that I now sported on my legs and top.

We trotted up the long ridge to the summit of Carn a’Mhaim where Sinco descended into Glen Lui. We turned around, back to where the ridge levels out, and dropped off the side into the Lairig Ghru.

It was a nasty descent. In keeping with my rather useless supporting role, I nearly bought it on the initial section, having to spin around to dig my nails into the ground as the earth below me was taken hold by gravity.

We stumbled our way downhill, still feeling like this was the end of a long fell race and not one-third into a 24-hour attempt. We reached the bottom of the glen, heading towards Corrour Bothy for the handover.

Rich and Ryan – his next support runners – weren’t there, but there were a few tents and walkers sitting around eating sandwiches.

Suddenly I felt very gubbed. After waiting a few minutes, I said to Ally that I couldn’t continue, unsure of how far he might end up having to go.

I handed over my supplies and bid them farewell as they headed up Devil’s Point. A few minutes later, Rich and Ryan appeared, flying up the path towards the bothy.

“They’ve just left”, I said, pointing to the lump above us. “You will easily catch them.” [I bet you said that with a wry smile – Editor]

Did that just happen?

They headed off. Immediately, the buzz that had kept me going for those past few hours was gone. I sat down and munched on an avocado and cream cheese wrap, chatting to the nearby walkers who wondered what the heck was going on.

I am always amused when I speak to people about these challenges, because it is really only people in the fell or ultra community who can grasp what running 100 miles and climbing more than the height of Everest in a day really means. Even I can’t fathom it.

And yet, he did. Somehow, despite me covering us in gel and nearly causing him to fall over as I took a photograph of him, Kim beat the record to climb 33 Munros in a ridiculous 23 hours 48 minutes, adding another 24-hour record buckle to his heavy belt of achievements.

It was a true privilege to chase Kim, Sinco and Ally across those hills, and to be part of it for a short time. Well done, Kim.

Up to the Eagle’s Nest
Sierre-Zinal set for fireworks