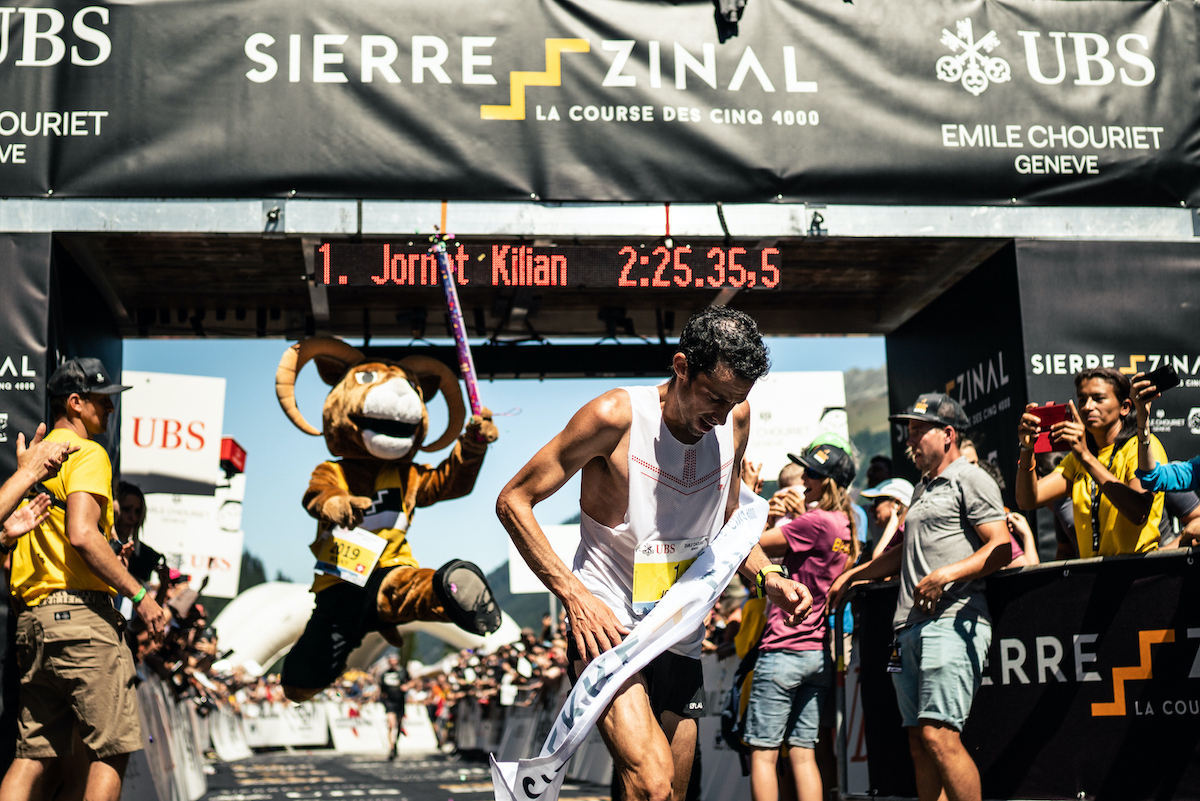 This weekend the World Cup heads to Switzerland for the biggest mountain race of them all, Sierre-Zinal. The field is jam-packed and hopefully not too may people are stifled by travel complications.

This is our next long distance mountain race, at 31km with 2200m of ascent, and it traditionally attracts the most competitive field of all the World Cup races. This year is no exception.

So what makes Sierre-Zinal such an iconic race?

Most mountain races have a lot of history behind them but this is the 48th edition of this race. Since its creation in 1974 men and women have raced over the same distance here, and as we’ll see the results list reads like an international who’s who of mountain running.

Athletes start in Sierre at 570m and then climb up, up, up to the highest point at 2425m at Nava over the course of 24km.

Then the final 7km is downhill, culminating in a frantic sprint through Zinal to the finish line at 1680m. It’s a tantalisingly runnable, fast course, which as we know results in some very exciting racing.

This race draws top international runners back year after year, in pursuit of one of the biggest accolades in mountain running.

But by far the most dominant male athlete here has of course been Kilian Jornet (ESP) who has won an incredible 8 times. He finally beat the record set by Jonathan Wyatt at an unbelievably exciting 2019 race, running 2.25.35. Lucy Murigi is certainly one of the favourites for the win. Photo: Marco Gulberti

As the winner in 2019 and 2020 Maude Mathys (SUI) has to be the favourite. In 2019 she broke the course record which had stood for 16 years. She has won the Mont Blanc Marathon and Olla de Nuria this year and she was also the winner of the 2019 European Mountain Running Championships. She’s 4th in the current World Ranking.

In 2015 Mathys was reprimanded for an ADRV for using clomiphene, a fertility drug which features on the WADA Prohibited List.

Judith Wyder (SUI) was 2nd here in 2019 and also went under the long-standing course record. She is a two-time winner of DoloMyths, most recently this year, and will definitely be another ‘local’ to keep an eye on, as will Simone Troxler, 3rd here in 2018.

Anaïs Sabrié (FRA) was 2nd in last year’s more low-key event and 5th in 2019. She recently came 3rd at La Montee du Nid d’Aigle and 2nd at the Marathon du Mont Blanc a couple of weeks before that. Compatriots Blandine L’Hirondel and Elise Poncet could also do well. L’Hirondel was 3rd at this year’s Marathon du Mont Blanc, won the 2020 French Mountain Running Championships and was 3rd at the World Long Distance Mountain Running Championships in 2019. Poncet was 6th at La Montee du Nid d’Aigle this year, 3rd at Trofeo Vanoni in 2020 and 2019 and 2nd in the World Championships 2019. We’ve seen a number of the runners taking part already do well in World Cup races in the last couple of months. Charlotte Morgan (GBR), our current World Cup leader, who was 11th here in 2019 will be taking part and is clearly in form.

Marcela Vasinova (CZE), 2nd in our current World Ranking, was our winner at the recent Tatra SkyMarathon and was 2nd at this year’s DoloMyths race.  Lorenza Beccaria (ITA) was 5th at Grossglockner and 4th at Tatra Race Run. She was also 2nd at FlettaTRAIL 2020 and 10th at the weekend’s Piz Tri Vertikal.

Alice Gaggi (ITA) finished 2nd at Tatra Race Run and 7th at Grossglockner Berglauf and has finished in the top 10 of most top Italian races during last couple of years. She’s lying 6th in our current World Ranking.

Return of the ‘mack

Our current women’s World Cup reigning champion, Sarah McCormack (IRE), will be starting a World Cup race for the first time this year. She was 13th here in 2019 and will be looking to build on that.

Other runners to watch include British runners Holly Page, who is always a strong performer at any distance and was 8th here in 2019, and Emma Pooley, 3rd at last year’s race and former elite cyclist, turned runner, duathlete and triathlete.

There are some strong runners from the USA including Katie Schide, who has won the Mont Blanc 90k, and been runner up at the CCC,  and Brittany Charboneau, winner of Pikes Peak 2020 with a marathon PB of 2.33. From Spain we have Oihana Kortazar, a former Skyrunning European Champion and World Series winner who won Canfranc Marathon and Marathon Pirineu last year, and Sara Alonso, 2nd at Canfranc Skyrace 2020. Julia Bleasdale (GER) was 4th at last year’s Sierre-Zinal and Julia Combe (FRA) 8th at this year’s La Montee du Nid d’Aigle. 8-time winner and record holder Kilian Jornet (ESP) returns and must be the men’s favourite. But he will face significant competition from a very deep field.

There are many returning runners who have already performed well here. Petro Mamu was 2nd here in the highly competitive 2019 race and he just showed that he’s in form by winning FlettaTRAIL last weekend.

Juan Carlos Carera (MEX) was 4th here in that 2019 race, in a time that would have won it many years. Andrew Douglas (GBR), our reigning World Cup men’s champion (from 2019), was 6th here in 2019 and will be looking to improve on that.

A Who’s who of mountain running

Marc Lauenstein (SUI) is a former winner (from 2013) and this distance suits the strong uphill runner. He won Pikes Peak in 2014, Marathon du Mont Blanc in 2015, and showed his versatility by winning the 3 Peaks Race, Giir du Mont and Matterhorn Ultraks in 2016. He’s also won 4 consecutive Trail de Ventoux races. Can he regain that form this year?

Davide Magnini (ITA) was winner of this year’s Italian National Mountain Running Championships (Up and Down) and was also 2nd at Mont Blanc Marathon. Has been 4th at Sierre-Zinal in 2020 and 10th in 2019. Rémi Bonnet (SUI) achieved a 3rd place here in 2020 and an 8th place in 2019. He was recently 4th at Marathon du Mont Blanc. Stephan Wenk (SUI) was 5th last year and 13th in 2019.

As ever, there is a very strong contingent of runners from Italy in both the men’s and women’s races. Henri Aymonod is our current leader of the men’s World Ranking and the World Cup standings, having finished 3rd at La Montee du Nid d’Aigle and 3rd at Tatra Race Run. He was the winner of last weekend’s Piz Tri Vertikal (and many other vertical races during the last couple of years).

Puppi hot on the heels

Francesco Puppi is fresh from a 2nd place at La Montee du Nid d’Aigle and currently lies 2nd in the World Ranking. Our runner up in the 2019 Long Distance Championships will be looking to improve on his 16th place in 2019, after having finished 4th in 2018.

In addition, Alex Baldaccini was 7th at Grossglockner Berglauf and 3rd at the Italian National Mountain Running Up and Down Championships. Italy could well feature on the men’s podium.

The French contingent could surprise

There are some strong French runners on the start line too. Sylvain Cachard had a very successful 2020 with wins at Smarna Gora and Trofeo Nasego and 2nd places at Challenge Stellina and FlettaTRAIL, putting him 4th in the current World Ranking.

Thibaut Baronian won Canfranc Marathon in 2020 and other results include a 6th place at this year’s Marathon du Mont Blanc and a 3rd at Zegama in 2019 and Julien Rancon finished 4th at the recent La Montee du Nid d’Aigle.

Lastly, Germain Grangier could surprise people here. He is better known for longer races (he won Madeira 85k Ultra in 2018 and Annecy MaXi Race in 2018 and 2019) but he’s fast over technical ground and came 4th in a very competitive Speedgoat 50k in 2019.

As in the women’s race, it’s great to see some great runners from the US on the start list, particularly after Jim Walmsley had such a great race in 2019.

Hayden Hawks finished 6th at the 2019 World Long Distance Championships and he’s been winner of the 52k race at Broken Arrow (and many others at the 50k – 100k distance). Compatriot Andy Wacker was 3rd at Pike’s Peak last year and was the NACAC National Champion in 2019 and has achieved top 10 finishes at Mont Blanc Marathon and Zegama in 2019. They should both be really interesting to watch.

Other runners to watch will include Lengen Lolkurraru (KEN), winner of this year’s Grossglockner Berglauf, William Rodriguez Herrera (COL), 2nd here in 2015, Jacob Adkin (GBR), 10th in 2018 and European Champion in 2019, and Zak Hanna (IRE). This will be Hanna’s debut at Sierre Zinal but he’s had a string of top 10s at races like Grossglockner, Trofeo Vanoni, Chiavenna Lagunc and last weekend’s Piz Tri Vertikal.

David Nilsson (SWE) brings some really fast road times of 1:01:40 for the half and 2:10:09 for the full marathon. Hopefully he’s got some mountain running tips from Ida. The Swedish international has run well on the trails before at the 45k Vasaloppet event.