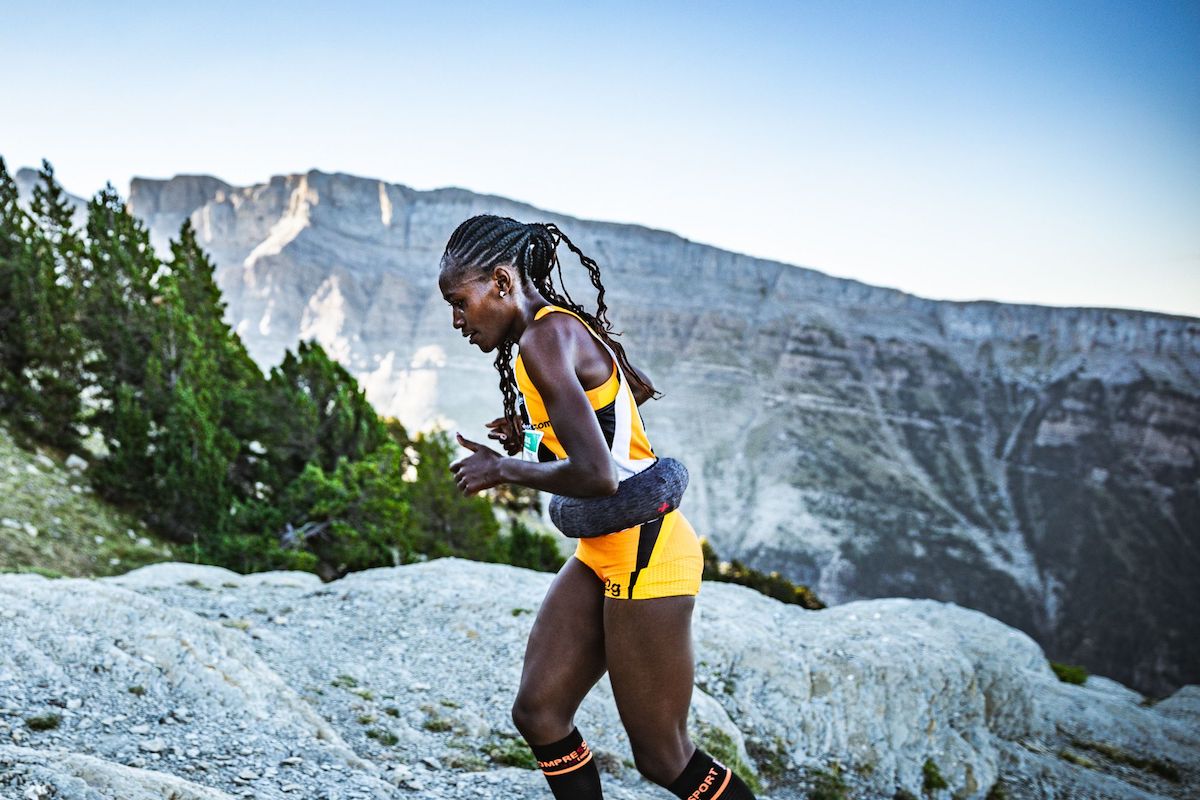 A new course record is no surprise given the standard of mountain running increasing year after year. Ally Beaven reports.

Running over a scenic route of 16k and D+1.400m, summiting La Moleta (2,574m), the course is like a scale reproduction of the entire Aragonese Pyrenees; charming village, deep forest trails, rocky climbing, challenging descending to a mountain lake and the final rush to the end over the Camino de Santiago.

The women’s race included the Valsir World Cup leader Joyce Njeru as the favourite against the Italian Camilla Magliano (Bronze Nid d’Aigles 2022, 4th Challenge Stellina 2022). Also there were two runners from the Spanish European Champs team Laia Montoya and Julia Font (Spanish Mountain Marathon Champion 2022) who would fight for the title to stay in Spain. Leire Fernández Abete was a great unknown quantity, as the former Zegama junior champion chose Canfranc to return to competition after successfully battling a tumor for the last two years.

From the very start, Joyce chose to lead from the front and took off with enormous power again, while the Italian Camilla Magliano struggled behind, hoping for her downhill technique to overcome her later on. Behind them Laia García Montoya soon got into podium positions while Julia Font and Leire Fernández Abete completed the top 5.

Joyce reached La Moleta summit after 1:11.21, which predicted a good time at the finish line but far from the impressive record of 1h57 that Grayson Murphy (USA) left behind as 2021 champion. Camilla passed just 1:23 back, fighting for the victory while Laia was third very much on her own, 5 minutes behind the Italian but another 5 minutes ahead of Julia and Leire.

The descent dreamt by the Italian was not to be. Joyce proved she continues to progress day by day and in a descent as fast as it was technical and ferocious, she not only maintained her advantage but increased it remarkably.

Njeru’s lead is now unassailable. With 3 races still to run she is the Valsir Mountain Running World Cup Champion! Meanwhile, in the men´s race Kenyan Philemon Kiriago shot out for the kill right from the station, with Frenchman Robert Loic as the only one who dared to stay on his wake. It was gold or DNF for him. Behind the leaders, Spaniards Raul Criado, Noel Burgos and Antonio Martínez followed their own strategy, as experts on the course.

Kiriago summited La Moleta with a new ascent record at 1.00.08 slicing out 2 minutes on Daniel Osanz’s 2020 time. Also at a record pace, Robert Loic stayed second, trusting on his upbringing at the French Pyrenees to overcome the 1:42 lost on the climb in the descent. He bet right.

Half way down, Loic’s technique and courage risking everything paid off and he took the lead, while behind them both there was a crazy descent by world descent VK record holder Raul Criado who despite summiting fourth 5 minutes behind Philemon was blasting down the mountain spurred on by the dream of every one of the 600 Canfranc volunteers for him to win the World Cup at his home village.

The Canfranc finish line welcomed Robert Loic as champion with 1.43.11 which left us a new record, way below that off 1.47.35 by Antonio Martínez. Kenyan Philemon Kiriago took the silver with 1.43.53, just 42” behind the champion, while Raul Criado signed a sensational bronze with 1.45.00. The Spaniards Antonio Martínez and Noel Burgos closed out the top 5 with 1.49.50 and 1.50.48.

Kiriago’s 2 podium finishes bring him within touching distance of Patrick Kipngeno at the top of the standings, just 52 points behind. With 3 races to go, it could go right down to the wire!