Physiological testing for runners: What, how and why 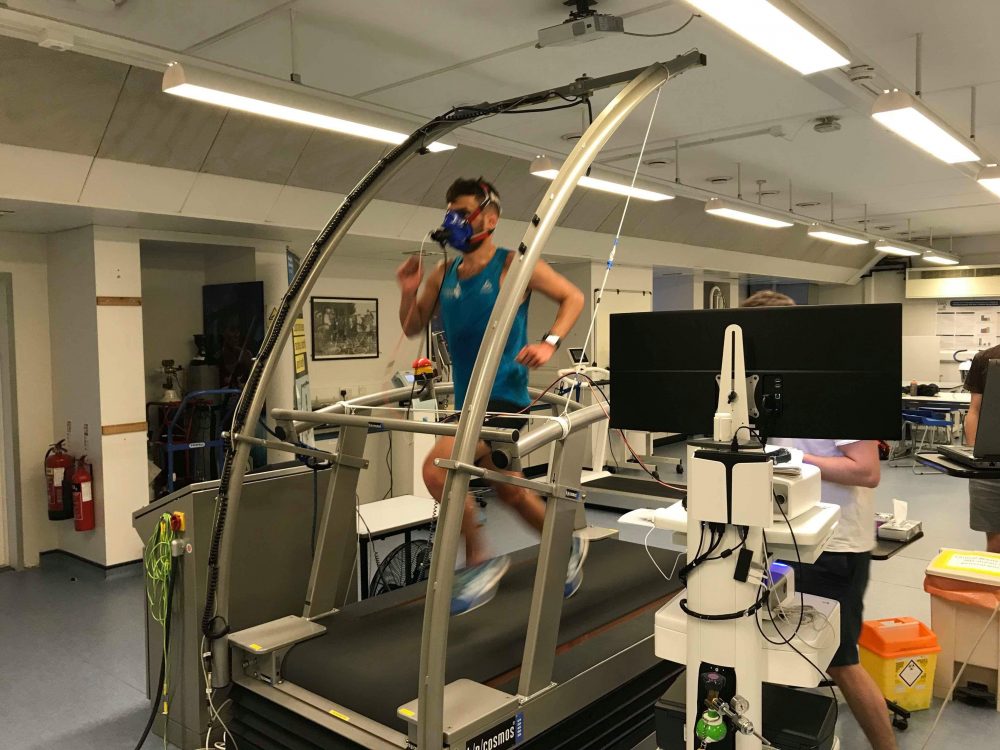 Science and running can make good bedfellows. Here’s a lowdown on the benefits of undergoing physiological testing.

Runners of all abilities can hugely benefit from physiological testing. Maybe it will help you set a marker for future comparison, assess what makes you the runner you are, or actually direct training through identifying strengths and weakness. It really is a worthwhile use of your time.

On a visit to Kingston University Sport and Exercise Science department, Chris Howe, an ultra runner and researcher at the university told Fast Running, “physiological testing provides objective data and information about an individual’s current fitness level and training standards”.

What are we testing?

Everyone always goes straight to a VO2 Max test. The magic number that tells you just how brilliant you are. Yet it’s not that simple or we wouldn’t even have to have races, we could all just compare VO2 Max scores at the start line and then go home.

Depending on who’s conducting your tests and what you (or your coach) has asked them to look at, you can delve into a range of markers. We’ll try to discuss a few different tests that could be done and why you might do something different, but it’s important to know what and why you’re doing something. Otherwise, you’re at risk of wasting money and time.

It could be lactate threshold, lactate turn point, running economy, respiratory quotient, rate of perceived exertion, heart rate or a host of other factors. Getting up to speed

What matters is how anything can be useful to the athlete. The running economy at 22kph might be useful for a 1500m runner, but how could it help a 24hr runner? Likewise looking at the utilisation of fat stores in a 440m hurdler probably doesn’t help anyone.

How are we testing?

How we test is as important as what we test. At the most basic level, doing a physiological test for a runner on a cycle will not provide accurate results. An elite runner is optimised to their sport and the body might struggle to ‘do it’s thing’ when tested in an unfamiliar sport.

Equally translating the results into your training is a lot harder if done incorrectly. For example, you might be looking at the heart rate at which an athlete hits their lactate threshold, but this could be different on a bike to a treadmill. How useful is that test then?

It’s not even just about chucking a runner on a treadmill and measuring stuff. Working with Kingston Uni’s Chris Howe, we use a protocol designed by Howe with ultra running in mind. If you’re racing at slower speeds then those results become important too.

A 5k runner might not want to investigate how they perform at 10km per hour, but a female 24hr runner is looking at a European medal at that speed.

Commercial outfits might want to get you in and out of the door as quickly as they can. You’re money in the bank and they can just give you a nice VO2 Max score to take home.

Quickest way? Ramp up the treadmill every minute and see just how long an athlete can hold for. Sure, you’ll hit your max effort, but if you’re a runner specialising in flat speeds, how can you translate this to your training? Even translating HR may be different if you’re less efficient when the gradient is ramped up.

Trust no one implicitly

Even when everything is spot on, there can always be a degree of inaccuracy. Tests like Fat-Max (which looks at what fuel source you’re burning), heart rate or measuring blood lactate have a margin of error.

Factors such as antecedent training, breakfast, motivation, caffeine levels and what shoes you’re wearing can make a difference.

As an athlete, I originally took everything I obtained from ‘science’ as gospel. As a coach and a student, I’m learning to question everything, especially the results and articles that suit your own agenda. Confirmation bias can play a huge part in your interpretation of results.

Looking into the methodology of the fat-max testing there is a much larger margin of error than some wouldn’t accept elsewhere, yet in the past, this had been used to sculpt eating plans for 24hr races.

My most recent testing returned results of a runner without any real ability to utilise fat as a fuel source. Had I completely untrained my body by being too dependant on carbohydrates? Too many sweeties?

Yet it could just have been how my body was operating given I had been stuffing my face with free energy bars at the London Marathon expo that morning. It could have been affected by the poor night’s sleep or travel the night before. Given racing since I wouldn’t expect it to be a correct set of results, but maybe a retest will tell next time.

Science can be very useful in telling us about our running and our limitations, but it’s key not to hold it above suspicion. Science is supposed to be challenged, it is in the very nature. It’s not just about finding out how fast you are. Several athletes have found the main benefit of physiological tests is actually so they can see how slow they should be running. Correctly polarised training is vital and for some, easy just really isn’t easy enough.

As an athlete it’s not the easy runs I struggle with, I love easy, but going too hard in sessions. The physiological tests I have taken have been used to get sessions in the sweet spot. Tempo runs that aren’t all out races and adding some control to marathon pace work.

Yet every now and again there is a call to ignore the numbers and go on how the body feels. We all progress and have those days where you just feel on top of the world. Sometimes there is just an opportunity to train with a faster group and you want to experiment. All still holds excellent value for a runner, if only as feedback to use for future training or racing.

Does science have a place on race day?

Then comes race day. Do you ‘Steve Jones it’ without the watch and just go on how you feel or keep that heart rate with 1bpm of where the scientists say it should be?

Personally, I’m somewhere in the middle. For anything below half marathon the heart rate monitor is on, but just to reflect back on. It’s useful data to have afterwards, but race day is when you can do something special. Last year at age 30 I was still hitting new max heart rates. Had the watch been directing my run I may have gone easier. Would you ease off in a sprint finish because the watch said so?

In a marathon I might have an upper limit of HR I try to not overstep. A critical power even. If the number is less than 180 then that’s okay, if it goes above a coulee beats then ease back gently. Hit 185 before halfway and it’s time to take it easy for a mile to two. Is it tiring Paul?

Yet heart rate can be affected by heat, an illness, caffeine intake or just adrenaline pumping through your body.

Kingston Uni’s man Howe reminds us that “tests allow for defining of training zones for the monitoring and setting of specific training plans as well as evaluating progress of an individual’s training”.

Science can be really useful in guiding training, measuring progression or just an insight into why you are the runner you are. You still have to take into account who you feel, but testing can provide that objective input too.

The best scientist you know is still the one inside your head. You’ve been together your whole life. If you’re reflecting upon performances and listening to each other, your brain and your body are a pretty good team. Physiological testing can become a part of that team too.