Why is Running Performance Decreased in the Heat? 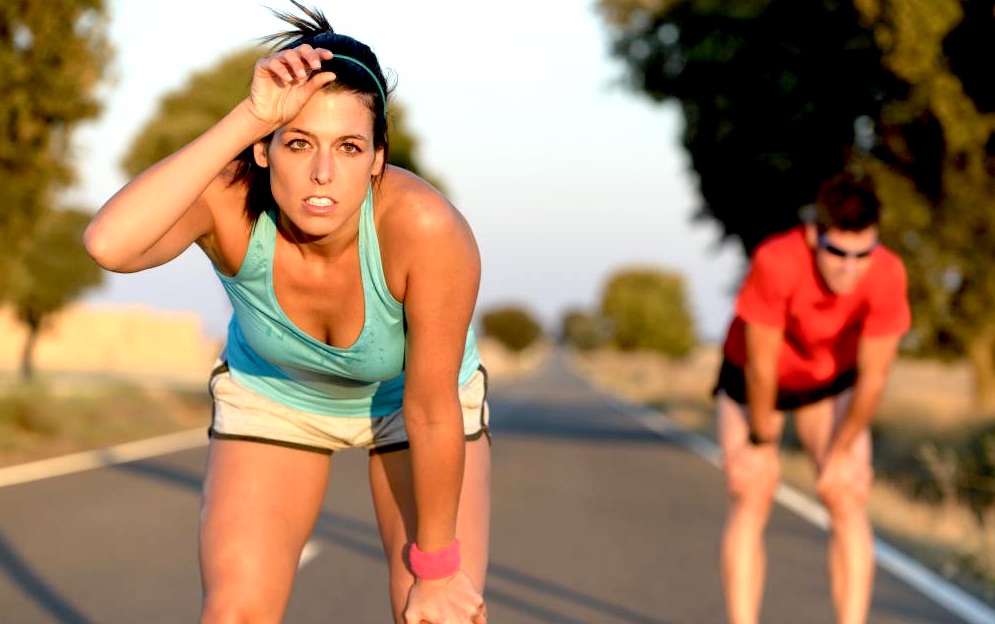 It is generally accepted that aerobic exercise capacity, as in running, is reduced in hot conditions whilst sprint performance may even be improved.

The impact of environmental temperature and humidity on endurance performance can be significant – and its scientifically proven marathons are slower when the temperatures rise above 11°C.

Heat production is directly proportional to exercise intensity, so extremely strenuous exercise, even in a cool environment, can cause a substantial rise in body temperature. Humans are roughly 20% efficient, which means that for every 100 Watts we produce, we also produce 400 Watts of heat. Of course, athletes who produce 400W would produce a whopping 1600Watts of heat!

Large increases in body temperature during exercise are unlikely to occur in individuals who run at a slower pace (e.g., those who run a marathon in 4 to 6 hours) but are common in the faster, highly motivated athletes (who are able to produce more power and thus more heat).

For a while, it was thought that when body temperature rises to about 39.5 °C (103 °F), central fatigue (i.e., fatigue in the brain rather than in the working muscles) would develop. This was seen as a protective mechanism to prevent overheating. It was based on studies, where subject exercised in the heat till they were exhausted and always seemed to stop when core temperature reached about 39.5 °C (103 °F).

However, it has become clear that an interplay of multiple factors and not just core temperature is responsible for performance decrements in the heat – as outlined in the infographic below. 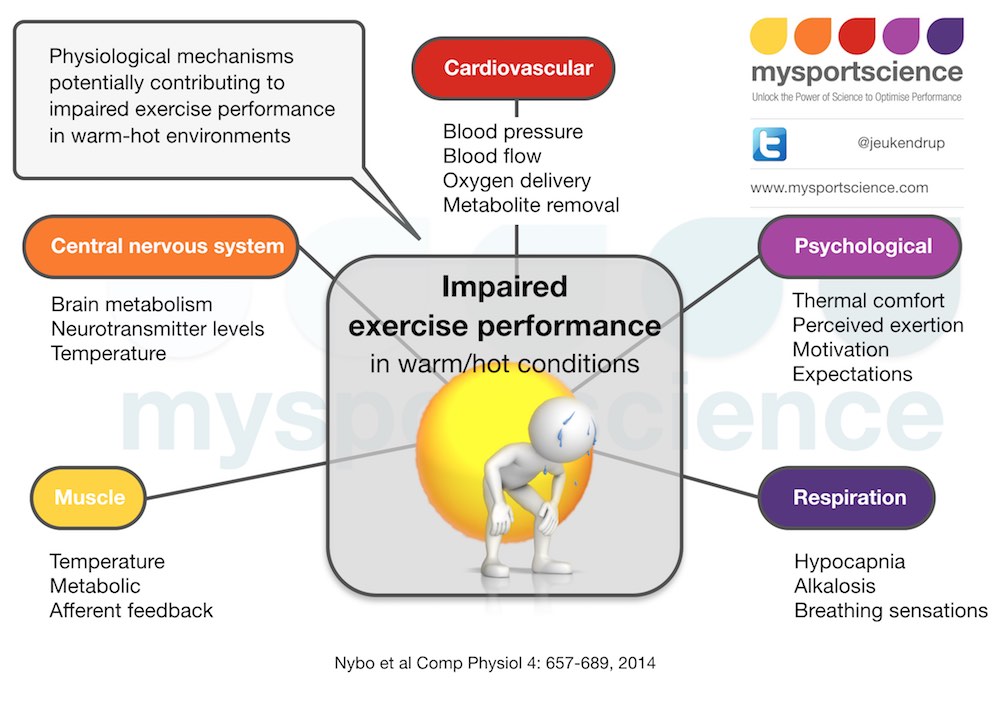 It is also now understood that heat per se affects performance and that hypo hydration makes things worse. If the body heats up and the body becomes dehydrated to a significant degree all physiological functions are likely to be compromised.

Cardiovascular – when becoming dehydrated plasma volume may be reduced, whilst blood vessels expand. This makes it harder to maintain blood pressure and blood flow, whilst heart rate is increased. If the cardiovascular system is compromised this may affect oxygen delivery and metabolite removal.

Central Nervous system – the brain will heat up and there are a number of changes in the brain like fuel depletion, changes in neurotransmitters, accumulation of ammonia, cytokines etc that may alter brain function.

Muscle – heat also directly and indirectly influences muscle function, there is an accumulation of metabolites and an increased rate of glycogen breakdown.

Respiration – increases in ventilation and breathlessness are usually observed.

Psychological factors – last but certainly not least, there is increased discomfort and effects on pain tolerance, mood, and motivation, all of which can influence performance.

So what causes decreased performance in the heat?

So, explaining why performance is decreased in the heat, predicting how much performance will be affected, and how much certain levels of dehydration will influence this, is complex. It is clear that there is not one factor but many factors that work together to cause fatigue, as summarised in the infographic above. There is still much that is not fully understood and research concluded that future studies have to try and isolate each of the factors that influence performance in the heat and study its importance. Obviously, this is time consuming and no easy task.

From a practical point of view: we can’t usually change the environment, therefore it is recommended to minimise dehydration and look for opportunities to cool skin and body.

About the author:
Asker Jeukendrup is a Professor of Exercise Biochemistry and Director of Mysportscience. He published extensively on the topic of sports nutrition and is an authority in this field. Nowadays he works as a consultant to many elite and not so elite athletes all over the world. Asker is also a keen runner and triathlete. You can contact Asker on twitter or mysportscience.com.