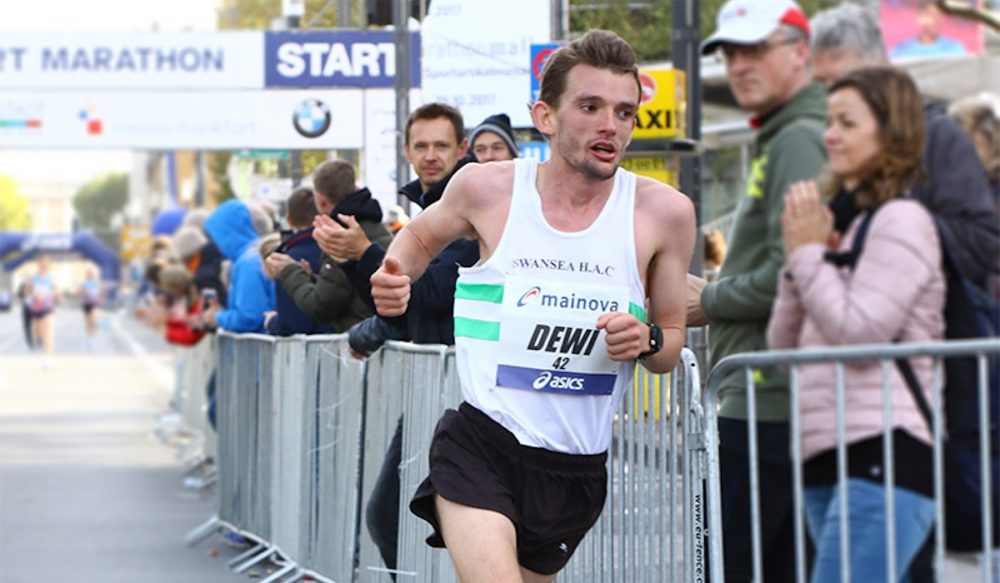 Dewi Griffiths, one of this generation’s fastest marathon runners, is keen to pass on the lessons he’s learned as a result of a five-month layoff from competition.

Now Griffiths is keen to pass on the lessons he’s learned as a result of that enforced five month layoff from competition, to help runners of all abilities keep positive during time out from injury, and ultimately come back stronger than ever.

We asked the 2:09 marathoner to give Fast Running his advice on how to best deal with the mental and physical issues that can come with injury. He was happy to oblige, and explained the answers lie within each and every runner, and patience is the key to long-term success.

“The best advice I can give anyone is to ask three questions: What is the injury? Why did it get injured? How can I stop it happening again? I think it’s imperative to any successful rehab to know the answer to these questions,” he says.

“However, typically the first questions you hear runners ask are: ‘Can I still run?’ or ‘I’m running so and so race, will it be ok?’”

Instead, Griffiths advises taking a more measured approach and following these simple rules:

Rest – Treat it as an off-season and enjoy the rest. There is plenty of time to think about running when you’re back training properly again.

You may miss out on a few races you were looking forward to in the short term, but there will always be another race, so think long term.

Back to basics – Getting to the root of the problem is the most important thing, whatever weakness that may be, and working on it to bring it up to strength. Take it as an opportunity to evaluate other aspects of training you could do better, or you’d like to do differently next time.

Be patient coming back. You might feel like you could do more, but your body might not be ready. Taking an extra week now might mean you don’t have to take another month off down the line.

The 27 year-old proved the power of adhering to his ‘rest, back to basics and patience’ methods of injury management when he stormed to back to back victories at the British 10k and the Barry 10k and a 14:45 parkrun first finisher result at Swansea Bay during a highly successful three week racing comeback in July and August.

He accepts he has been lucky to receive valuable support from Welsh and British Athletics during his time out, but it’s clear the long-term approach he took when returning to running and racing is one that would benefit all runners.

“When I had to pull out of the Commonwealths and was told to forget about the European Championship marathon for the greater good of my body, my future as a runner and essentially what’s realistic for the rest of 2018, all of those difficult decisions were done on my behalf,” he acknowledges.

“There was no pressure on trying to be back in shape for a certain time or race, so I had all the time I needed to heal – there would always be a race waiting for me, when I was ready.” Griffiths lives and works on his family’s livestock farm in Llanfynydd, a physically demanding job that proved a godsend when injury stopped play with his running career.

The well-balanced Welshman thinks every runner should retain interests outside of running to ensure the sport doesn’t dominate life, which can be potentially disastrous when injury strikes.

“I was pretty fortunate to be living on the farm during this time (when he was injured), it kept me out of trouble,” he explains. “I was lucky I was able to walk around pain-free from the start, so I was able to keep myself busy during lambing, not dwelling too much on not being out in Australia (for the Gold Coast Commonwealths) and so on.

“When you’re a long distance runner, you never really have an off-season, as all the seasons blend into one, with track, cross country and road all overlapping these days. This meant I approached being injured as an off-season of sorts, and it was nice to forget about running for a while.

“I couldn’t tell you what the Power of 10 rankings look like this year!”

Planning ahead for races post-injury

Griffiths is keen to emphasise the positives that can come from an injury layoff, and thinks it can also be a good time to plan ahead for happier times on the racing circuit.

“I’ve taken the opportunity to implement some positive changes in my life, which will hopefully make me a better athlete and ultimately a more robust and faster runner,” he explains. “I’m now doing some regular strength and conditioning to strengthen any weaknesses, and I’ve also improved my nutrition with the help of a nutritionist.

“The exciting thing for me is I think my fastest days are still ahead, although with the nature and severity of my injury, any plans to run a marathon in 2018 have had to be shelved.

“My main focus will now be the European Cross Country [to be held in Tilburg, Holland in December]. From now until then, the focus will be racing over the shorter distances to gain back the speed I’ve lost and slowly building the training volume back up to where it was, so I’m in a good place when 2019 comes in.

“Looking ahead in the short term, I’m looking forward to racing some more on the roads in the autumn, as I chase some race sharpness, mainly racing in Wales and a few of the same races I enjoyed success in last year.

“First up will be the Cardiff 10k and the Dam to Dam 10M in Amsterdam, and then I hope to be part of the Welsh team at the inaugural Commonwealth Half Marathon Championships in Cardiff in October.

“I hope I’ll start finding my legs again by then, so I can finish the year on a high at the Euro cross champs – I have unfinished business at this race after what happened last year [when Griffiths had to pull out injured mid-race having led from the start]. Hopefully, I can get to the finish line this time around!”

RELATED: Dewi Griffiths: How do you bounce back from a bad race? Looking further ahead, Griffiths is looking forward to a spring marathon next year. Excitingly, that marathon will most likely be London.

The second fastest British runner this decade is sure it will have the makings of being the most hotly anticipated marathon of a generation from a domestic point of view.

“I wouldn’t be surprised to see a certain Scotsman [Callum Hawkins] and a certain Englishman [Mo Farah] on the start line, as well as many of the other top British marathoners present,” he enthuses. “Depending on the result on the day, it will determine how the rest of my year will shape up.

“My dream is to be on the start line in Tokyo 2020 in as competitive a shape as I can possibly be.”

Griffiths has turned what could have been a career-ending injury into a positive life changing event, using his lay off from running to strengthen his weaknesses, focus on the long term goals (Tokyo Olympics) instead of dwelling on the short term disappointments (missing the Commonwealths and European Championships) and taking stock of what it is he wants from life, not just running-related.

The marathon star’s injury advice – enjoy the rest, go back to basics with evaluating how to improve your training and weaknesses, and be patient with returning to running – can we applied to every runner facing the same predicament.

As Griffiths reminds us all: “You may miss out on a few races you were looking forward to in the short term, but there will always be another race, so think long term – taking an extra week now might mean you don’t have to take another month off down the line.”

RELATED: Dewi Griffiths reveals how he’s fought back from injury

Dewi Griffiths is sponsored by Asics, and favours the Gel Kayano 25 for his base miles, the RoadHawk FF for fartlek and tempo runs, and the Gel-DS trainer or the TartherZeal 6 racing shoe for intervals.