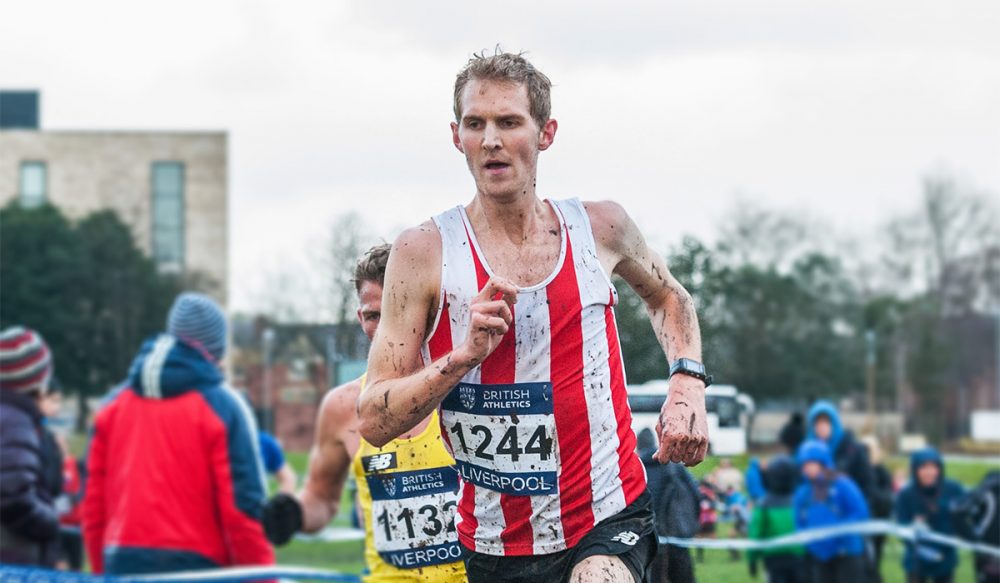 Following a fantastic start to 2017 Alex Teuten’s dreams of a first GB vest in March were dashed when British Athletics decided against sending a senior men’s team to the World Cross Country Championships.

A stress in itself but Alex remained resolute, and last Saturday (November 25) at the European Trials the prolonged wait for a first British vest was no more.

Finishing second to Ben Connor and ahead of Sam Stabler, it was a repeat of English National XC championships podium earlier this year. A déjà vu moment – only this time with his dream now a reality.

Like many athletes, he has experienced highs and lows in his career, and with this comes the associated stresses – sometimes good – sometimes not so good. The stresses associated with being an elite athlete is a subject the 25-year-old is keen to share and in particular how he manages it all.

Other than the immense feeling of satisfaction from achieving one’s goals, there is widespread admiration from the wider community; friends, family, colleagues who appreciate the dedication, commitment and effort required to reach and maintain the level of ability that is associated with an elite athlete.

However, it is not all honey and roses as any athlete will tell you. Other than the physical pain and exhaustion from undertaking the necessary training to reach this level, there is another, often concealed enemy to the athlete: the mind. It has the capacity to make or break you. When wielded successfully, it can draw reserves from the body it never knew were there, which can make all the difference in a sport with such fine margins.

However, it can also be an athlete’s worst nightmare.

The power of the brain

The brain itself can have a dramatic effect on performance, both in the short and long term of an athlete’s career. During a race, for example, it is the first organ to suffer, entering a phase called hypoxia (an apparent lack of available oxygen).

It is this process that makes an athlete believe the current pace is “too fast”, and yet the legs are capable of sustaining that pace and potentially even increasing it. The sensitivity of the brain to oxygen is far more than anything else in the body, and justifies the well-known phrase “the brain will give up 1000 times before the body will”.

This is the most significant way the brain impacts performance, and the ability to push through those feelings of anxiety in a race are crucial to maximising performance.

The brain has another part to play in this theatre of fun though. The mental state of an athlete is hugely significant and paves the way to fulfilling dreams or falling short of them.

An athlete is susceptible to a number of stresses and it can be a daily battle. It is crucial that these are handled appropriately or they can lead to serious health disorders, not least depression.

Running at an elite level is inherently stressful. Pushing your body to its limit will always have its repercussions but that’s not to say it’s not a worthwhile pursuit – far from it.

On the main point, people either associate or dissociate to stress in times of pressure. Being subjective for a moment, I definitely associate to stress; taking it on and embracing it. I recognise that it is beneficial and an important aspect of my life (in small measures).

Metaphorically speaking it’s like riding a dragon; once controlled makes the rider more powerful and protected, but unless tamed the dragon is a serious threat. But as they say, diamonds are made under pressure! There are many though that see stress as a hindrance and attempt to remove it from their lives through calming means. Carrying on with the animal analogy it would be like performing a hike with a monkey on one’s back; it has little benefit and merely impedes performance. Take a moment to think about which type you are before you read on.

Managing stress is tricky; there is no magic cure for it. For most people, stress is typically associated with day-to-day life, and ironically going for a steady run would be one of the best ways to alleviate the problem. But for athletes, it is the running itself that is the problem!

So for myself, the opposite applies, and I often immerse myself in my work to take my mind off. Elite athletes often work part-time and invest a significant amount of their workday to their sport, which has its obvious advantages in terms of performance but it introduces pressure. For them, athletics is in part an income and with that, any physical irregularities put a threat to that. I’m actually glad I’m not a full-time athlete; it can get a bit much at times! So my PhD helps distract me in the day.

The week prior to a race is always a particularly stressful time. The brain starts to develop doubts and “creates” pains in your legs. The odd bumps and pings you wouldn’t think twice about in usual circumstances suddenly become career-threatening injuries in your head, but the most important thing to do is stick as close as you can to your usual routine.

I significantly reduce my mileage in that week but I still believe it’s worth running a little each day, with one rest day if you’re that way inclined, just to reassure that you’re fit and healthy.

On top of the physical jitters, there’s the worry that you haven’t prepared enough and that you could’ve done more to achieve your target. But let’s be honest; that’s yesterday’s problem. All you can do is ensure you get to that start line in the best condition you can be in, so early nights, good nutrition and ensure you don’t pick up a bug! And plan; plan your meals, plan the journey, plan the race, heck plan what you’re going to listen to on your warm up if it helps! But prepare.

I was incredibly nervous going into the European trials last week, but writing about it helped. Perhaps then I could recommend that athletes talk about these things to calm the nerves. I could look back now and think it was unnecessary but that overlooks a crucial point; that stress is beneficial! I may well have needed those nerves to really deliver on the occasion.

In just over a week I will be representing GB at the European XC and that brings a very different nervous feeling; one of expectation. In the trials, the only person I could disappoint was myself.

Now, that prize is much, much larger. This is, of course, my first GB call-up, but I remember my first England international in 2013 well. I will use all my experience of that and other appearances in Slovakia.

And I can take comfort that I was stressed before the trials and had “the race of my life” as the commentator put so well, so am I well set for another blinder? Time will tell.

Orthorexia: a dysfunctional relationship with food
Broken dreams: why we need to break the cycle