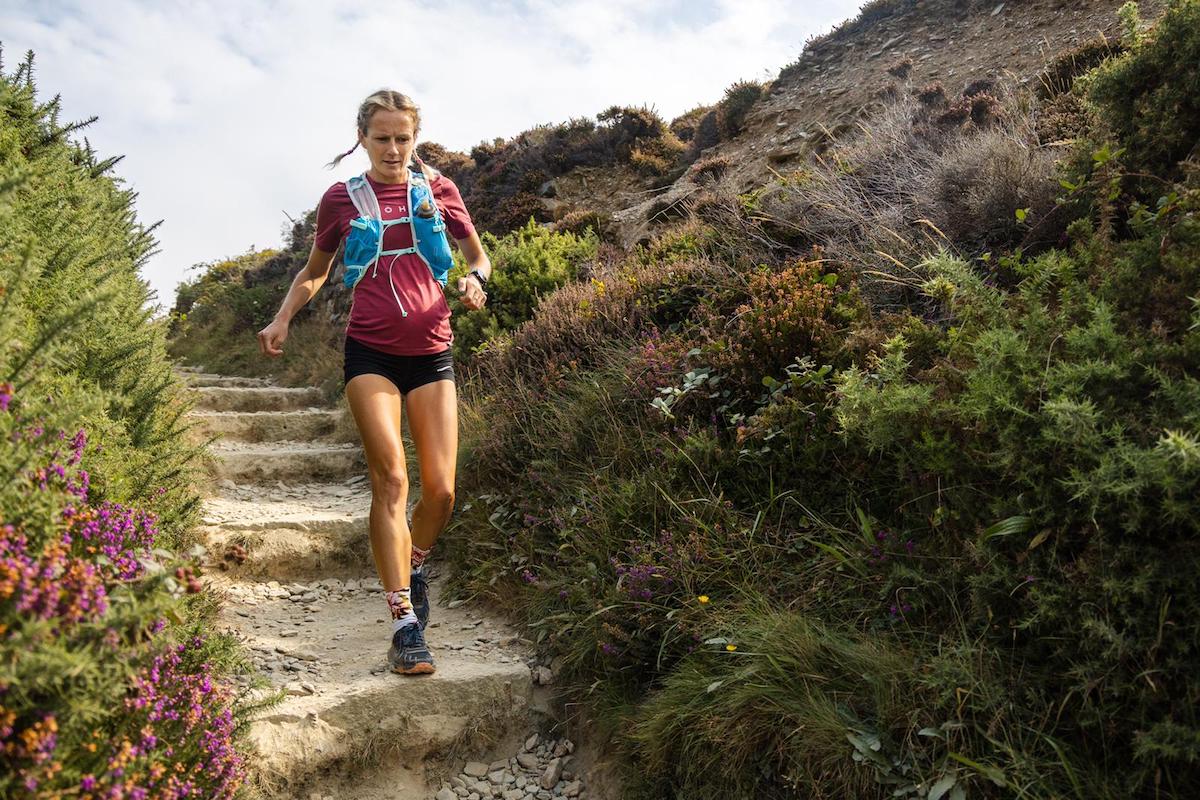 It’s a subject that really doesn’t have a huge amount of readily available information so trail and marathon athlete Julia Davis wants to share her experience of running during pregnancy.

It’s a strange feeling when every mile you run and every consistent week of training doesn’t make you faster but instead you get slower – this is one of many baffling experiences of running when pregnant.

I am currently at 29 weeks pregnant and can honestly say its been one of the most challenging but also enjoyable experiences I have had as a runner. The challenges aren’t all bad, many have been enlightening and self-assuring but it’s certainly been a rollercoaster mentally and physically.

Running over the past 6 months or so has most importantly helped me to maintain a sense of self, keeping the endorphins flowing and my mental state in a good position.

There is a lot of opinion out there on what exercise you should be doing when pregnant. Gone are the days where bed rest is encouraged but we are a long way from it being fully accepted that women might want to continue to train during pregnancy.

I have received a lot of admiration and praise for my running endeavours over the past few months but these have often been outweighed by the pressures and judgements by just a few of the old school mentality telling me that what I am doing will damage the baby. As if women needed to feel more guilt for doing a sport they love than they already do – the impact of those one or two negative voices can feel very loud.

What stops us being active?

Studies show that only 15-20% of women in the UK stay active throughout pregnancy which to me seems very low.

In the early stages of my pregnancy when fear of the unknown was at it highest I spent a lot of time on the internet trying to find research and guidance to know whether maintaining a training schedule was the right or safe thing to do. Much of the information out there does encourage women to stay “active” through pregnancy but keeping it to no more than 30 minutes of light exercise 3-4 times a week.

For a lot of women this is probably more than they normally do but what about those of us who are runners? We still have big ambitions for post-pregnancy. Should we just be demoted to the scrap heap?

Obviously in reality  the exact guidance will vary wildly between individuals, which isn’t dissimilar to any regular training plan. I was keen to learn what would be both safe and beneficial to maintain throughout pregnancy and postpartum.

It was comforting to learn that there is no contraindicative data to say that running during pregnancy can cause miscarriage; if you remain well hydrated, fuelled, rested and didn’t overheat you were good to go (providing your own common sense is also key).

Exercise has actually been proven to lessen time in labour, speed up recovery rates and benefit the health and development of the baby so it seems we need to be shouting about this more.

The lack of visibility of pregnant athletes makes me feel like women were once again being side-lined until they were back to racing post partum, almost like you can’t exist in your sport until you’re back to “normal”.

It is almost impossible in most big races to defer entries due to pregnancy which for expensive events is a real issue to most. Many women do plan a rough time when they may want to start a family but it shouldn’t mean our lives have to go on hold just in case we fall pregnant so miss out on that big race.

If it were men who were having the babies I am almost certain races would allow easy deferrals and facilities would be in place to help. Why do we assume a women won’t come back stronger?

The current battle with the London Marathon is a prime example. Women have only just been allowed to defer their place, but not their championship start entry. Why would the assumption be that a woman’s ability to run a marathon post partum would be so much more limited than before?

Why should we face a difficult struggle back to the positions we were in pre-baby? I am planning my return to running and racing already and hope that I will comeback as many women do – stronger. Both mentally and physically, remembering that I need to stay patient and humbled by my body.

It’s great to hear of some brands pushing for opportunity for women to compete without additional barriers. There are rumblings that some brands, such as The North Face, are looking at ways to make races more female-inclusive which could mean childcare options and easier deferrals.  A glimmer of positivity and hopefully something that will be a standard if we keep banging on the door for change.

Women are not small men

We shouldn’t have to behave or be treated like small men to be professionals in our sport. It wasn’t that long ago that brands were striking off big names from their roster for being pregnant, deeming them useless until they could once again deliver the results as before.

These women are heroes to other women in any sport and their journey through motherhood as sportspeople is equally as valuable and inspiring. We should be able to account for 50% of our sport no matter if we fit into the male-shaped space we often feel pressurised to fill.

I had apprehensions on having a family of my own because I believed I had so much potential in running that could be wasted if I had a break away from running but why should I feel like this?

We need to normalise women coming back stronger post partum, not rushing their healing but celebrating a comeback that promotes longevity in running. I believe I have my best racing still ahead of me and the best thing is it’ll be with a new number one cheerleader in tow. This has to be a strength that women can bring to sport rather than a hindrance or barrier.

The sport needs to start seeing women as other women (and many men) see them.

Ambition is still healthy trait for a mum

Women want to feel secure that being ambitious doesn’t make them a bad mother and surely fulfilling what makes you happy will make you a better person overall. Sure there will be sacrifices but isn’t life about balance?

There are incredible women who show they can come back stronger and faster post-partum, giving me hope that although my big start lines are now pushed back to next year I can get there and be better than before.

In the past few years it’s been brilliant to hear of more research and discussion on the affects of the menstrual cycle for female athletes’ training, racing and recovery and I hope this can extend to more focused research on athletes during pregnancy and postpartum. Just like a menstrual cycle, every woman’s experience will be different but the more we share the more we can support and learn from each other. I have been truly humbled by the female body over the past 6 months; how we continue to function (mostly) as normal but we grow every tiny part of a new person while we go about our lives.

Us women have incredible capabilities and seeing this through new eyes I have a new-found respect for the mums who continue to chase their goals with babies in tow. The resilience and strength of our bodies an minds must give us advantages in the long run – at least that’s what I’m banking on.

I want to encourage other women to share their experiences both positive and negative as well as their fears of pregnancy.

While I appreciate it won’t be a journey some will make, there are so many of us women out there who want to have their running life and goals back once we’ve had a baby so let’s work together and open up the topic more because I’m just as excited and scared as the next woman!

And that’s a wrap
A long journey of 800 metres