International recognition on the mountains, marathon success on the roads, and now Robbie Simpson has discovered a new passion for cooking nutritious vegetable-based dishes.

The 26-year-old British international is best known for running across the mountains in Europe, and an occasional outing at the London Marathon.

This includes a 2:15:04 best this year that earned him a place at the World Championships. Unfortunately, injury ruled the Scot out of London 2017, but he is now back training and racing and ready for the next goal.

When not running over a range of terrains, he can be found in the kitchen exploring different tastes of the world – and since adopting a vegetarian diet this love for cooking has grown even more.

Simpson chats with Fast Running about mountains and roads, training, cooking and what prompted him to give up meat.

What is it about mountain running you love?

I love being in the mountains, travelling around and seeing different places. This summer I was training in different parts in Switzerland, and at one point I was training up at 7000 ft at a little ski resort.

It was just amazing waking up every day and seeing all the jagged mountain peaks with the sun rising.

After the mountains, it has to be the trails. I have always enjoyed the trails and even when I am training for a road marathon I still spend most of my time off road in the forest running.

Do you find mountain running benefits your road running?

There are pluses and minuses. Because of the strength I build from the mountains I never have a problem with long runs on the road, especially hilly courses and holding the same pace throughout.

It definitely benefits the longer distances and endurance side of things, but you do lose your speed initially. If I go straight into a 10k of the mountain running season I really struggle to run a PB.

What is your favourite distance on the roads?

Marathon definitely. The half marathon is a good distance to race over for training, but I just feel a lot more comfortable at the longer distance. At the marathon level, I am just able to push that bit more and compete.

And what is your favourite distance in the mountains?

I think the marathon as well, but I do like the short steep races too. They are often about 10km in distance and take about an hour to complete because of the ascent.

With the longer races its good to have that bit more time to ease into the race, and then push at the end when others start to fade.

Does your training change between mountains and roads?

It changes quite a bit. I tend to race a lot in the mountains during the summer, so my week could look like a race at the weekend, followed by a session on the hills on a Tuesday something like 8 x 3 minutes uphill. Or it could be on the flat, something like a progression run.

In the winter it is more marathon focused for the roads. So instead of doing three-minute reps uphill I would something similar on the flat. I would also have a longer tempo runs up to 18 miles sometimes.

In terms of long runs, when its summer its more about vertical metres on hills than miles, but when it comes to the summer it’s about getting the miles in on the flat. 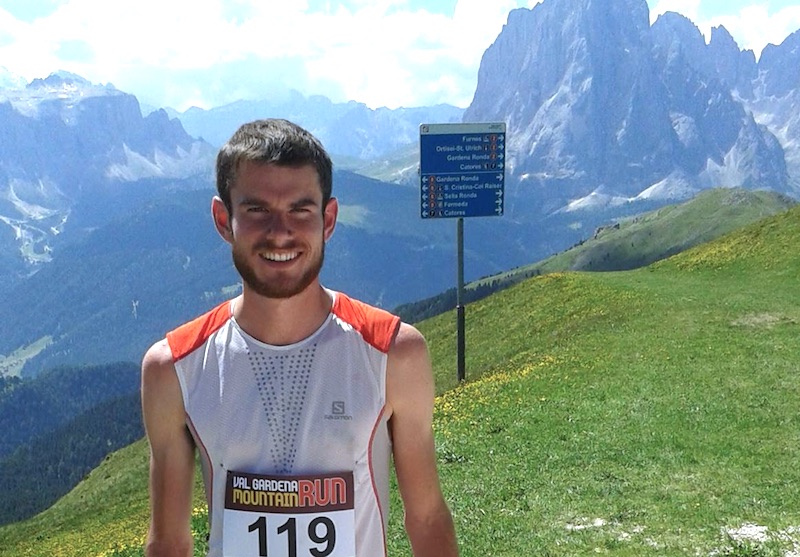 In a week when training for a marathon my weekly mileage would average 110 miles, whereas when I am focused on the mountains it’s more like 80 miles just because of the vertical climbing.

Did you ever compete on the track?

Only a bit when I was under 13 or under 15. But not really, the nearest track was in Aberdeen but even at that, I lived quite far away from it.

So I just didn’t get the practice on the track growing up and the competitions were always far away. Saying that I always just preferred to be out running in the forest instead of sitting in a car to get to a track.

What advice would you have for anyone considering the mountains?

Just go and give it a go. Unfortunately though in the UK there just isn’t the same amount of traditional mountain races that there are in the rest of Europe. I lived outside of the UK for three years because of the races in Europe. It would be worth giving that a go.

A lot of people can sometimes be put off by thinking they are not good technically downhill, but actually, a lot of the big international races are uphill only. But guys from a road or track background tend to do very well in those races because you need that speed as well as the strength.

A lot of people confuse it with fell running, but it is not the same at all and takes a different set of skills. You can do very well in it if you are from a road, track and cross country background.

If you like hills just give it a try.

What is the biggest lesson you have learnt in your career?

Recently the amount of training I do and the importance of not overdoing things. You can get away with it for a while but then the injuries to come. Even if you feel good after a race it still doesn’t mean you have recovered – you do need to take to rest.

What are your interests away from sports?

I am quite into cooking and experimenting with different recipes. So I might explore that passion a bit more at some point.

Pre-race, the night before I tend to go for pizza. I make my own before most races, and pizza is always a good choice after the race too. I have been a vegetarian for a year now so I avoid meat on my pizzas.

The morning of a race it would be oats – not porridge  – I make my own with different fruits and seeds.

So how have you found life as vegetarian?

It’s great actually. At the beginning, I wasn’t too sure, but I wouldn’t look back now. It has got me a lot more interested in cooking and my health. Before I just would have cooked a bit of meat and had whatever alongside it. Whereas now, I spend a lot more time exploring different foods and all kinds of different recipes. 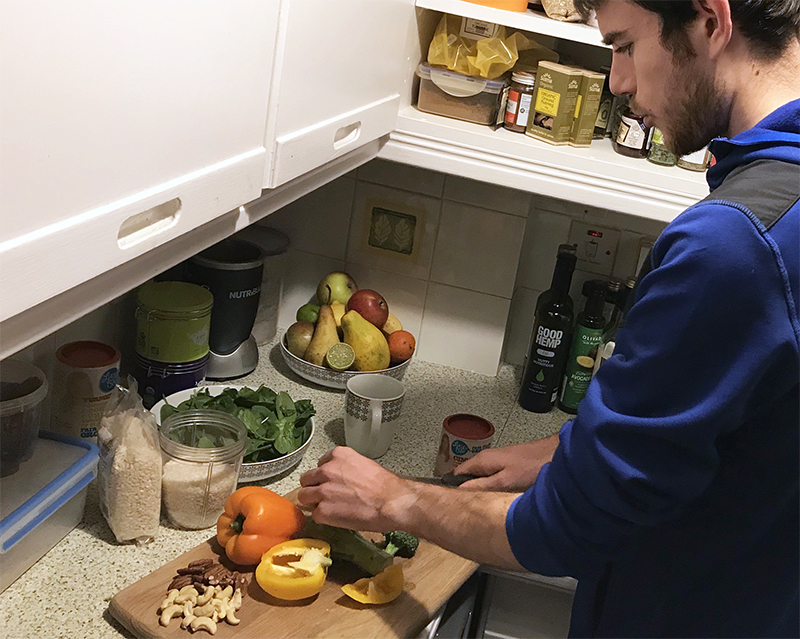 In terms of performance, I used to get a lot of stomach pains when running I was never too sure as to what it was – if it was dairy, eating too much meat or something else. But since I have cut out meat and milk my stomach troubles have just disappeared – so this has been great for training.

For recovery, it has been good for me too. People always say you need loads of protein etc. but I’ve found get more than enough from plant-based sources and if anything I recover better now after sessions.

You mentioned you don’t drink milk anymore, do you avoid all dairy?

No, I still have a bit of cheese on pizza. The main thing was because I like oats a lot I was then drinking a lot of milk every day. I actually cut milk out a long time ago, so from the age of 18 to 20, I have been using plant-based alternatives.

The only dairy I eat now is the occasional bit of cheese.

What motivated you to adopt a vegetarian diet?

The environment side I think is really important, something that a lot of people don’t realise. At university, I was studying countryside management and it included a lot of environmental topics, including farming and the impact deforestation and greenhouse gas emissions have on the planet.

When you learn and do some research it really makes you think a lot. It’s really the scale of it, there are so many people across the world eating meat and dairy to excess and the impact of this is huge.

I think the one stat that is publicised now a bit is that the impact of the livestock emissions has a more damaging effect on the planet than the whole transportation industry combined.

People are starting to realise this a bit and acting, and even just eating less meat and dairy products can be a big help.

I am from a farming area myself, and when its a way of life and your livelihood I can understand peoples reluctance to giving up or reducing the amount of meat produced. But a lot of the problems is the intensive farming – the sheer scale of it in some places. A lot the crops that are growing around the world are just to feed livestock, and this has caused a lot of deforestation around the world.

I am have nothing against the agricultural and farming, I just think there are different options that we can and should look to. There are other things that we could do with the land.

Do you think more people will reduce or stop eating meat anytime soon?

In the western world, we have always had the tradition of eating meat regularly, and it’s become a bit of status thing. Other parts of the world are now developing, that traditionally they may not have consumed much meat, but as they are becoming more wealthy they are following the example of the western world.

This demand on a global scale is what’s responsible for so many issues around the world.

The industries play a large part too, promoting that you need to eat this much meat or drink this much milk – when actually this is all driven by profits and not your actual health.

But there are more people starting to adopt a vegetarian or vegan diet, and I anyone who I have spoken to has only positive things to say.

Apart from a bit of cheese on pizza everything that I cook is vegan, and this type of cooking opens up a whole new world if you try it. It good to try these things and just see how good food can be. When I was living over in Europe a lot of athletes I meet were vegetarian or vegan.

Gemma Steel: how I train for a 10k and half marathon
How I train: Shona Heaslip