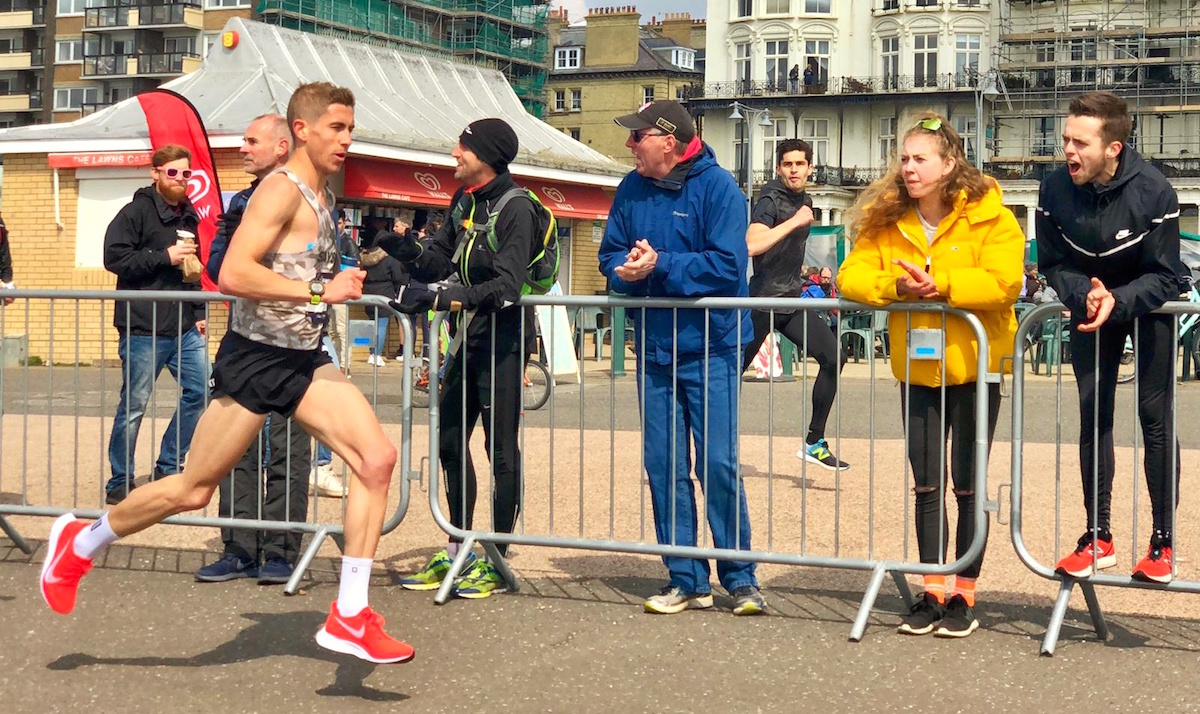 Everyone knows that step up to the ultra running after being a marathon runner, but it seems Paul Navesey didn’t get the memo.

The former British 100km champion has taken the unconventional path of going from speedy ultra runner to even speedier marathoner. At the 2019 Brighton Marathon the Crawley AC athlete out kicked a pack of quality runners to finish second in a new personal best of 2:18:16.

“As we hammered down the seafront I said to myself “No one else is having this”, I was on home ground” said the Allison Benton coached rocket. “I’d done so many repeats and sessions on that seafront that I wasn’t going to let anyone else take it at that point”.

Having lived and trained with Paul for several years I know why he backs himself in a sprint whatever the distance. The natural speed has always been there. But what has led to 2019 breakthroughs at 5k, 10k, half and full marathon?

“I haven’t really been on the track since last August” was the first clue from Navesey. “We actually went more off-road with the training. After a broken buildup to Frankfurt we [Paul and coach Allison] decided to try more trail running as the road can be unforgiving.”

The Downlink 36.7 mile footpath that links the South and North downs Way and where Paul and others from the AB training group regularly run long runs and tempos. Ironically Paul did have the course record for the ultra on the course as well.

“You might not call it trail, but it’s perfect for us. Just being off the tarmac means you think less about times and splits. I was getting caught up on pace but being on trail helps you relax a little” stated the Sussex man. “We’re sill running fast but a few seconds difference per mile doesn’t matter if you’re working hard enough.”

“Beforehand every marathon build up had broken down at some point.” Yet Brighton 2019 was the first one to really pull together well. “Even if I felt a little over-raced by the start-line.” Everyone loves to race though.

After a disappointing ninth at the Sussex County XC Champs the tide turned with a 29:33 for second place at Chichester Priory 10k, 14:07 for 15th at the Armagh International 5k and a win in 64:56 at the Grand Brighton Half Marathon. February was a tidy month for the former ultra runner.

Then followed another excellent 66:17 half marathon at the Big Half in London in March and all eyes focused on Brighton afterwards, but it wasn’t these times that Navesey remembers most. “I know positions, not times” said the racer. “I love to race and that’s what I planned to do at Brighton. Peter [le Grice] pulled away early on and we worked as a group to chase him for a while, but then we were just racing each other.”

All of the top six ran PBs that day and Brighton Marathon isn’t know for being a fast course. The four of Navesey, Ian Leitch, Dan Nash and Rob Corney sprinted along the seafront to new bests and Andy Coley-Maud was only a few seconds back with all under 2:20. A great sign for British marathoning.

The power of the group

It would be remiss to not mention the successful training group the Navesey is part of. Coach Allison Benton has a committed bunch of athletes from the Sussex area that train, race and drink coffee together to great success. It has definitely played a part in all the runner’s success.

The likes of James Westlake, Kevin Rojas, Ben Savill and Tom Evans are all regularly part of the pack taking on long reps together or pushing the pace on a sunday. Group trips away to Font Romeu and other beautiful parts of France have brought the group together and made them faster.

“We’re all invested in similar goals and it’s bloody good fun. You just enjoying going out for every run wth the group.”

It’s a close knit bunch that Benton has brought together and made stronger as a whole. Seeing the group together at Armagh 5k back in February it was more than just a much of runners, but friends who wanted the best for each other.

“It’s motivating because you see what’s possible. When Westy [James Westlake] ran 30:15 for 10k we all sat up and took notice. He’d been playing football and running before and then when he focused on running the results were clear.”

“You want to beat your peers, but it’s not just racing each other. The group keeps you strong on the tough days too. There is a shared experience of the tough times and it helps.”

From the outside it seems simply that Benton asks the runners to invest as much time and effort as she does and it pays off. “You feel like you need to work just as hard, it’s about “we”, a real coach-athlete relationship.” Orion Harriers’ Fast Friday is next for the former ultra runner and also a tilt at another marathon PB in the autumn. Exciting times ahead. Maybe one year Navesey will return to the Canterbury 10 miler, to avenge his second place finish at that one. I can only remember the finishing positions from that one too…

Will you ever come back to ultra running Paul? That speed and your experience over 100km could be right tasty. “I’m not ruling it out. Another eight kilometres wouldn’t bee too bad.” just after British Athletics named a strong squad for the World 50k Champs this week.

Navesey is sponsored by Saysky, a Danish apparel brand who make performance running gear that Paul likes. His Instagram game is HOT so check him out on there. Look out for a follow up article on Navesey’s training next week.

Managing your career and your running: insights with Sara Treacy
Get out of the comfort zone and spread your wings