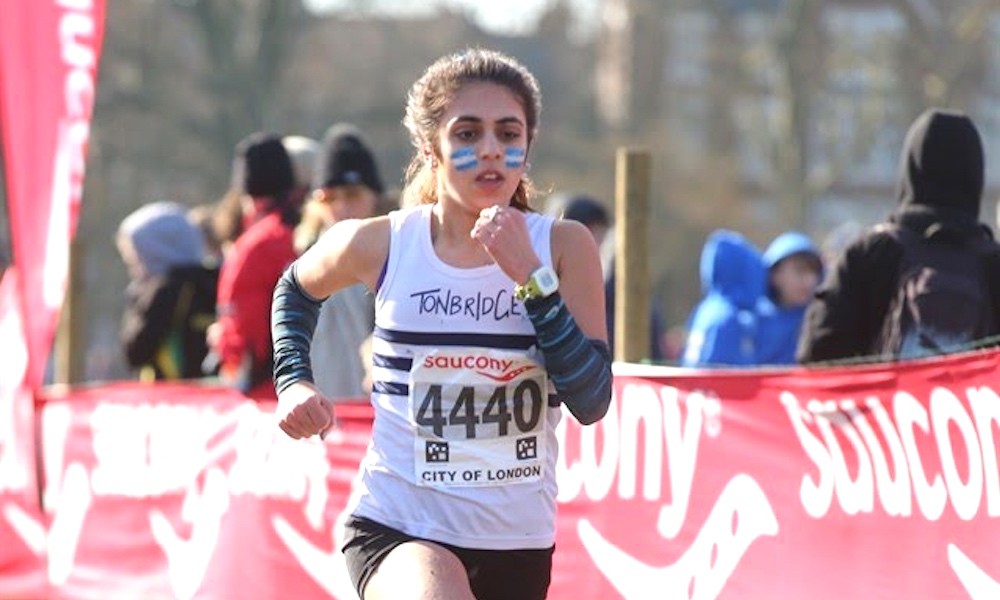 The young Tonbridge AC athlete has become an integral part of the dominant Kent squad.

Kiri Marsh has been running seriously for just over two years, but in that short space of time, she has made meteoric strides alongside her Tonbridge AC club mates.

Not content with turning herself into a top track runner on the club stage, she has also made a name for herself in the notoriously competitive North Midlands Cross Country League, where she competes for Nottingham University.

Just two seasons ago Marsh was working hard to dip inside the top 20 of the high quality league. This season she has finished 2nd, 3rd and 4th, with one fixture remaining on home turf at Wollaton Park.

Returning to Kent for the recent cross country championships at Brands Hatch, the young talent improved to a third overall position, securing her place on the team for the forthcoming Inter-Counties.

Worryingly for her rivals, she reveals that her strongest terrain is in fact on the track and road.

“I’m keen to make some good progress in these areas over the coming years,” she tells Fast Running.

Although she concedes she started running two to three times a week aged 14 – when she first joined TAC – swimming was the priority until she started university.

Studying in Nottingham means Marsh spends much of the year training with her fellow students on the track, road and trails, who she credits with her consistent improvements.

However, it is her Tonbridge coach, Richard Owen, who is the overriding key to her progression.

“I couldn’t have made such good progress without Richard,” she enthuses. “I built my training up to six to seven times a week at uni in 2016, returning to Tonbridge in the holidays to join the group there.

“I also started attending Richard’s circuit training. Eventually, he moved me up to his coaching group and took over my training. The group he moved me to has some very fast runners in it!

“Initially, I found it challenging both physically and mentally, but ultimately training with the group has really helped me to progress.” Marsh is full of praise for Owen, who also coaches Lucy Reid and Nicole Taylor, both athletes who have made significant steps to gaining international selection in recent months.

Marsh explains how the Tonbridge maestro has led his athletes to such impressive success: “He tailors his coaching specifically to an athlete’s needs, understanding how to tap into the psychology behind what motivates us.

“Richard seriously cares about getting the best out of his athletes. He is truly dedicated. He sends me training plans and sets to do at uni, follows my progress, makes adjustments to my training schedule as required, and gives really constructive feedback.

“He never fails to encourage us. Our relationship with Richard is one built on trust, and most importantly, friendship.

“I think sharing the same values and beliefs forms the foundation of our relationship. Those are that the athlete’s health and wellbeing is key and takes precedence over performance. I can put all my trust and confidence in Richard and I feel comfortable talking to him about anything.”

While it is clear Owen’s influence on Marsh and the rest of the TAC women’s squad has been fundamental in their rise to the top of the British relay crop to name just one achievement, Marsh must take some of the credit for her improvements.

She credits her commitment, consistent training and, perhaps most importantly, the appropriate recovery methods – ‘such as lots of banana cake’ she adds!

However, Marsh soon returns to her coach’s impact on her progress, explaining how he not only structures her physical training but helps her deal with the mental side of running and racing too.

“There is a huge psychological aspect to racing,” she says. “The confidence Richard has in me has had a massive impact on my self belief, meaning I can approach races with a positive outlook and with confidence.”

Confidence must come from within, but clearly Marsh is surrounded by positivity, from her coach but also from her high achieving club mates.

One race in which the TAC women dominated in utterly astonishing fashion was at the multi-terrain Eridge 10M in Kent.

Lucy Reid won the race outright, beating the first man by nearly three minutes. However, the first man was actually third overall, as finishing quickly in Reid’s wake was Nicole Taylor, with Marsh making up the winning team as third lady on the day!

Marsh acknowledges she is part of something special at TAC.

“It is such a privilege to train with these girls,” she says. “There is such a positive group dynamic, which pulls us through some of the hardest of Richard’s sessions! I definitely think seeing Lucy, Nicole and Phoebe (Barker, an U23 international) consistently performing so well is a key motivator to my training and improvement in racing.” While it is paramount to highlight the fact that no successful athlete has an ‘average’ training week, with regular changes and progression key to improving, Marsh gives the following as an example of the basic structure of a week’s training at Nottingham University.

Friday – a recovery swim or yoga, or both if I have the time.

Saturday – a race or longer interval session, done either in Wollaton Park or along the canal.

Marsh adds: “Most of my training is done with a group at uni. I’m lucky to live in a house of runners, so the 6:30am morning shake out is usually done with my housemate Calum, which forces me to get up!

“When back home training with TAC, training is pretty similar, although session days are on Tuesday and Thursday instead of Monday and Wednesday. I also tend to do the additional runs on my own or with my brother, Nathan when he’s home from uni, as he is also a distance runner!”

Marsh’s motivating advice to other club runners looking to progress

The power of the group is clearly a big part of the Tonbridge athlete’s success.

Although Marsh had been a member of TAC since she was 14, it was only when she stepped up her training with a group at university and then joined Owen’s coaching set up at Tonbridge that she saw dramatic improvements.

It is not surprising, therefore, that she says any athlete wanting to get faster should train with others.

“I would definitely recommend joining a club if you haven’t already done so,” she advises. “There will be a coach who can help support your running and long-term athletic development. A running club has such a positive atmosphere. You’ll find like-minded athletes with the same desire as you, which I find is a key driver to wanting to improve!”

It’s exciting to see a good club runner become an even better one through training with like-minded athletes, all wanting to fulfil their potential.

Marsh has appropriately bigger goals for 2019 than the previous year, with more PBs and top finishing positions the realistic aims for the country, track and road.

“My general aims are to make sustainable progress and improvement, by staying healthy, happy and developing the coach-athlete relationship with Richard,” she explains wisely. “More specifically, however, I’m hoping for top 30 or 40 at BUCS cross country, and to run well at the Inter-Counties.

“I’m also aiming for a sub-16:45 5km, with the longer term aim of making the British Championships.

And why not? Riding high on a wave of confidence and boosted by both her own determination and improving results together with the support and passion of her club mates and coach at Tonbridge, there is no reason why Kiri Marsh cannot achieve every single one of those goals.

The last words must go to her coach, Richard Owen himself, who sums up the passion of his young star perfectly when he says: “Apart from her commitment to hard work, she has a steely determination to progress and be successful.

“She is a lovely kind and considerable young lady too, with delightful family values. She’s also pretty good at baking, but that’s not why I’m her proud coach! She is very coachable and I have a terrific coach-athlete relationship with her.”