Jenny Meadows on the future of pace making 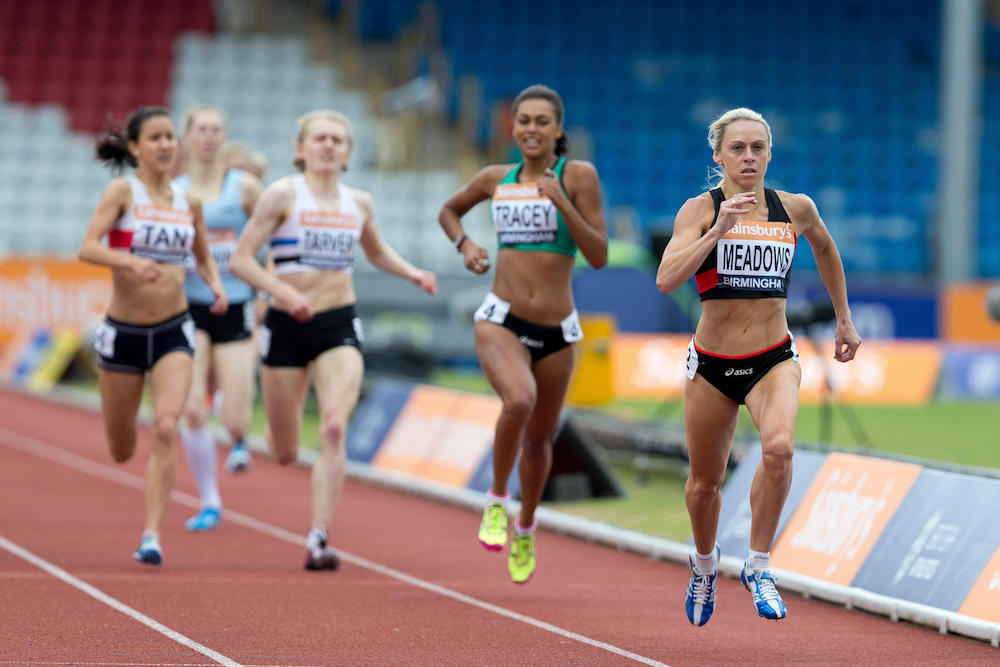 Fans of Arnold Schwarzenegger won’t need reminding of the iconic 1984 The Terminator. Underpinning the film is the dystopian scenario of machines taking over the world with the prospect of human annihilation.

The images are etched in my mind from viewing it as a 13 year old schoolboy and as I prepare to interview the 2009 World 800m bronze medallist about her thoughts on the future of ‘green light’ style technological pace making taking over the human form, I wonder if I am stretching any potential analogy a little too far….

A bridge from the pro ranks

I begin by asking Jenny Meadows what kind of shape she was in when she acted as pace maker on the Diamond League circuit several years ago. She reminds me that, “ I had retired the previous year so my manager suggested I pace make as it would bridge the transition from pro athlete to recreational runner.

I didn’t follow my usual strict training program and had no desire to put in the same amount of intense work that I would if I was an athlete in the field aiming to win, however it was still a huge sacrifice to have to go to the track and spike up a couple of times a week, maintain one S&C session and then run 3 days a week between”.

I press her even further by asking what she would have run an 800m in when ‘retired; in order to pace make and she candidly responds, “I would say I was in 2.03 shape for an 800m”.

Educated to masters level, I want to know if the 2010 World Indoor 800m silver medallist views pace making as ‘art’ or ‘science’.

Pausing for reflection before responding she affirms that, “I would say it’s an art as some people have a good pace radar and others don’t. During my career I could always gauge the pace quite well in races – in my PB race the aim was 57.5 through 400m and I got 57.49 as an example.

So meet directors recognised this and knew I would be sensible with my approach. If I was pacing 800m events I probably would have found this easier and enjoyed it, however I predominantly was asked to pace 1500m and even 3000m indoors so I often found I went a little quick the first 200m then settled into the desired pace from then on in.

The 1500m pace didn’t feel usual for me so I did some sessions on the track, such as 300m reps with 100m jog recovery, to try to hit the desired speed. Obviously science had to play it’s part in this instance but predominantly I think it’s an athlete using their sense of pace and judgment that makes them successful in this role”.

Keen to play the role of amateur psychologist I then attempt to regress Jenny back to August 19th 2009 by asking her if she can compare the pressure of being a pace maker to the nerves she must have felt in stepping onto the track in Berlin to take a medal on the global stage.

She readily acknowledges some material differences by explaining that, “In Berlin and major events it was all about me and I was very self focused. I had gone there with a plan and had a huge team working around me to ensure I was in the right shape to execute the process we had prepared for. As a pacemaker it was just me as I didn’t really even let Trevor “coach” me as I didn’t want to be coached anymore and just worked out the sessions and things I had to do to tick-over and maintain some sort of form in order to be able to take on this role.

If I would have allowed Trevor to help then I know I would have been in even better shape but psychologically I wasn’t in the head space to do this and didn’t want to do any of the sessions that I knew worked for me in the past and would get me in terrific shape as I was in retirement space. This meant when I went to pace make I did feel quite a one-person team which did make me feel quite nervous as no-one really understood what I had done in preparation and therefore I had no-one to check my process.

When I was an elite athlete also I would hide away in my room to prepare pre meet whereas as a pacemaker everyone wanted to discuss the pace with me and give me their opinion and often things were changed last minute so it was very difficult to control things which made me quite anxious as the plan and pace was constantly changing and with this, it brought pressure to think ‘Gosh can I do this?’ and I didn’t want to let anyone down. It was quite chaotic”.

Leading others to success

In leaving the chaos behind, I am keen to hear the success stories and demand to know what was her favourite experience as a pace maker. With a giggle she counters, “Can I have two?! The first would be when I paced Laura Muir to the 1000m British indoor record in Birmingham indoors back in 2017. Her coach Andy Young had discussed the pace with me and urged me not to go too fast the first 200m so Laura still had running in her legs the last 200m and I felt the intensity of this as the British crowd so wanted to see Laura get that record.

My second would be at a race that summer in Hengelo over 1500m when I helped Hassan to a 3m56s clocking. I was actually suffering from a stiff Achilles and doubted I would even be able to get round and was really worried that the pace maker would have to drop out before the race and wondering what everyone would say.

Somehow I managed to erase the pain from my head and make it round at the desired speed of 2.07/8 for 800m and continue up to 1000m if I could and at the end of the race I was delighted to hear that Laura Weightman, Sarah McDonald and Melissa Courtney had all run World Champs qualifying times. I could share their joy with them and feel I had some sort of involvement”.

I deliberately leave the proverbial ‘million dollar’ question till last – so what does the 2011 world indoor champion think of the use of trackside technology for pace making and the proverbial ‘green light’? She is quick to endorse its development asserting that, “I’ve watched the green light technology this season and it has proven quite successful”.

At this point, I am beginning to return to where my thought process started with thoughts of The Terminator creeping back into my mind as I press as to whether she thinks this puts a nail in the coffin of human pace making and if so, is it ethical? She is adamant that, “I can’t reiterate how difficult it is to find a reliable pace maker as it has to be someone who is at least international class and bordering on world class”.

She turns the tables on me by asking, “How many athletes would want to do this when they have their own careers to get on with?”. I acknowledge this is a fair pint and she reminds me, “I only did it for a year as I didn’t get much enjoyment out of it as I had retired from athletics as I didn’t want to live that lifestyle and put my body through that anymore at the age of 36. So, this being said, I can understand that the light system is a great idea”.

Jenny’s parting shot offers an insight into why the debate will continue to rage as she readily acknowledges” I’ve never experienced it as an athlete however so I’m not sure if it makes you rally to follow the lights in the same way a pacemaker would or not. I think it could quite easily be ignored if you get too far behind it whereas having an actual target of a person may be more achievable”.

As our meeting draws to a close I can’t help but think of Schwarzenegger’s signature saying in The Terminator- the literal translation of ‘Hasta la vista, baby!’ is of course ‘goodbye and see you later’. As I bid farewell to Jenny I have no doubt that ‘see you later’ is an apt description for those who see red on the green light issue- like Big ‘Arnie’ himself, the debate threatens, “I’ll be back”.

Check out www.jennymeadows.co.uk for signposts to coaching and mentoring support. Matt Long has authored more than 270 coaching articles and recently represented England Athletics as their endurance expert at the International Youth Conference.