How I train: Lauren Howarth 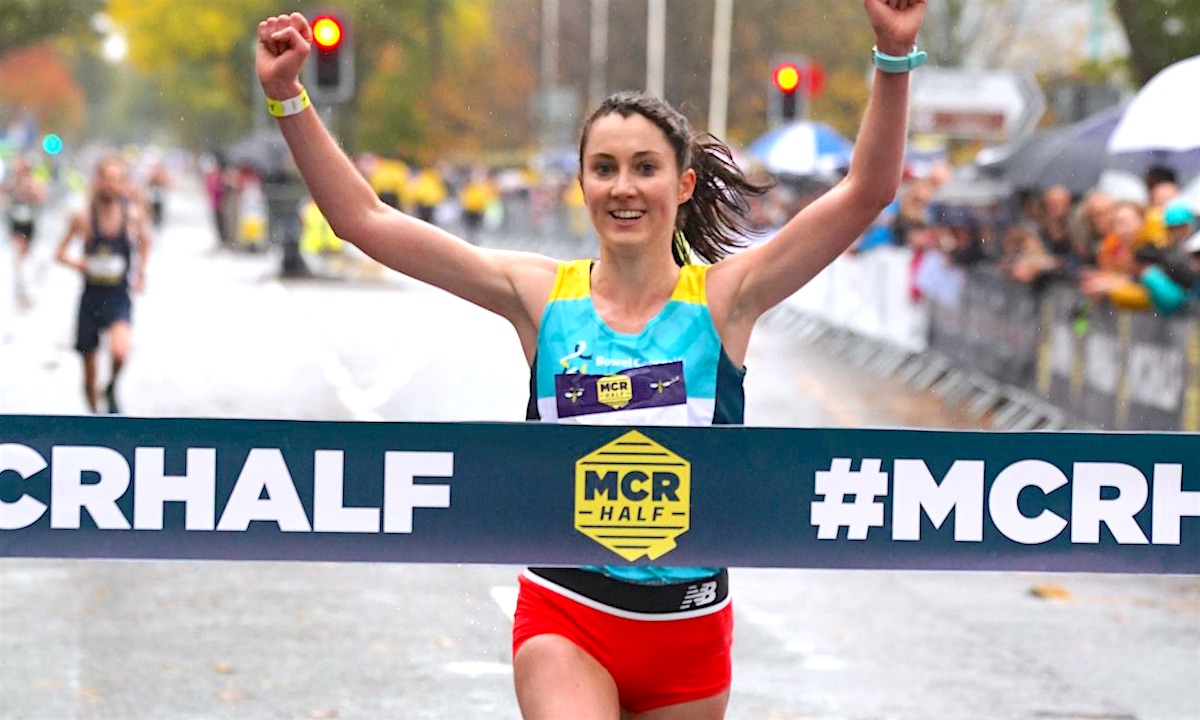 Lauren Howarth averaged 40 miles a week before her 74:16 Manchester half marathon win in October.

Howarth, who had to reduce her mileage after sustaining multiple stress fractures as a result of developing osteopenia, recently spoke to Fast Running about the cause of her previous low bone density issues and the interview can be found here.

However, the 28 year-old is keen to emphasise the dangers of allowing under-fuelled athletes to compete. Instead, she says they should be receiving help to regain a healthy weight.

Howarth returned to competitive action in August following a six month injury layoff. She ran 16:03 and 16:20 over 5k before posting the third fastest leg at October’s National Road Relays.

However, it was her two minute PB in the Manchester half that brought her back into the public eye. The 8:52 3000m athlete has always been a class act though. Her 9:15 road 3k in Armagh together with a 26:55 5 mile PB to win the Alsager 5 in February place her firmly in the top tier of British endurance running.

How has she managed to run such an impressive half PB off comparatively so little training?

She explains: “Since March I’ve had input from my dad (2:38 marathoner John Howarth) and my fiancé Andrew Heyes (13:47 5k athlete). It’s important to say that both of them advised against the half, so it’s definitely on an advisory basis!

“Every Sunday evening Andrew and I sit down to discuss how I want the next week to go. I’ll suggest what I think and what sessions to do. He’ll then try to place it in a sensible order. Taking into account what else I have going on with work is key.

“I thrive off having a routine, but don’t want to look too far ahead. Andrew would be the first to admit he doesn’t have the experience to coach me! But he is at least in a good place to tell me where it is sensible to back off and look after my body, or where I can push on a bit.”

Howarth used to run up to 55 miles a week – still a relatively low total – so she is clearly able to maximise the training she does put in, which includes some cross-training.

She gives further insight into her weekly regime: “An average training week volume is 38 to 45 miles, I haven’t gone above that since March this year,” when her latest stress fracture was diagnosed.

“I’m trying to stick to around 40 miles a week though,” she adds. “That is on the advice of my sports doctor, to try and avoid further bone injuries.

“Within those miles, I’ll do two sessions. These will include a mix of tempo runs, hills and reps, a 10-12 mile long run and another two to three easy runs between 4-8 miles.

“The pace varies a lot. It’s pretty irrelevant when you’re running up and down hills where I live in the Peak District. I tend to run on feel, but very rarely break 7 minute/miles outside of sessions.

“I supplement running with two strength and conditioning sessions and one or two hours of cross training.  I hope to increase that when I go part-time.

“I’d love to be able to do 100 plus mile weeks. However, I have to accept my body is not strong enough.”

Howarth’s two sessions a week and one long run is a structure she started with 2:14 marathoner Peter Riley back in 2011.

Since then she has been guided by Bud Baldaro while studying medicine at Birmingham University. That was followed by a two year stint under Steve Vernon as part of Team New Balance Manchester.

Support from friends and family

It is her friends and family who have provided the biggest source of support and encouragement though, as well as training partners. “It was my dad who coached me to my first ever GB vest,” she enthuses. “He’s never put any pressure on me to run, though, he’s just so knowledgeable.

“I’ll sometimes join Andrew for his easy evening runs. Since leaving TNBMCR and working full-time I’ve sadly not had a chance to do much more though.

“I also run a lot with one of my best friends, Hannah Martin, who doubles as my fantastic physio and sounding board!”

The act of juggling what may be low mileage but inevitably quality training with a full time career in medicine is a balancing act she is keen to get right.

“With the current injury situation and working I just don’t see any reason to squeeze in the extra sessions,” she explains. “I just get tired, grumpy and injured. I realise I will have to put much more work in to get back to my fittest and achieve the best I can. For now, I’m happy doing this.”

Fuelling her long shifts and often intense sessions is a priority for the New Balance-sponsored athlete.

“In my current job I’m on my feet around 50 per cent of the time, so whenever there’s an opportunity to sit down I take it!” she laughs. “Fuel-wise there’s always an OTE bar in my bag. My consultant makes sure we get a good break and sends us off the ward for lunch. That makes a huge difference.

“In previous medical jobs, I’ve not always had that time for lunch. Often we would be expected to work through it, which is not ideal for fuelling!”

The future for the Leigh Harrier

So what does the future hold for the soon-to-be Mrs Heyes, who is set to marry long term boyfriend Andrew in December?

“I just want to stay happy and enjoying racing,” she says. “For now I need to make sure my body recovers from the half marathon. The lack of preparation for the race is showing – I’ve already picked up a few niggles. Injuries will inevitably happen for me.

“However, I’m learning and constantly adapting. Who knows, hopefully I can run a marathon one day!”

RELATED: Lauren Howarth is balancing medicine with athletics and a wedding