How I train: Laura Hesketh 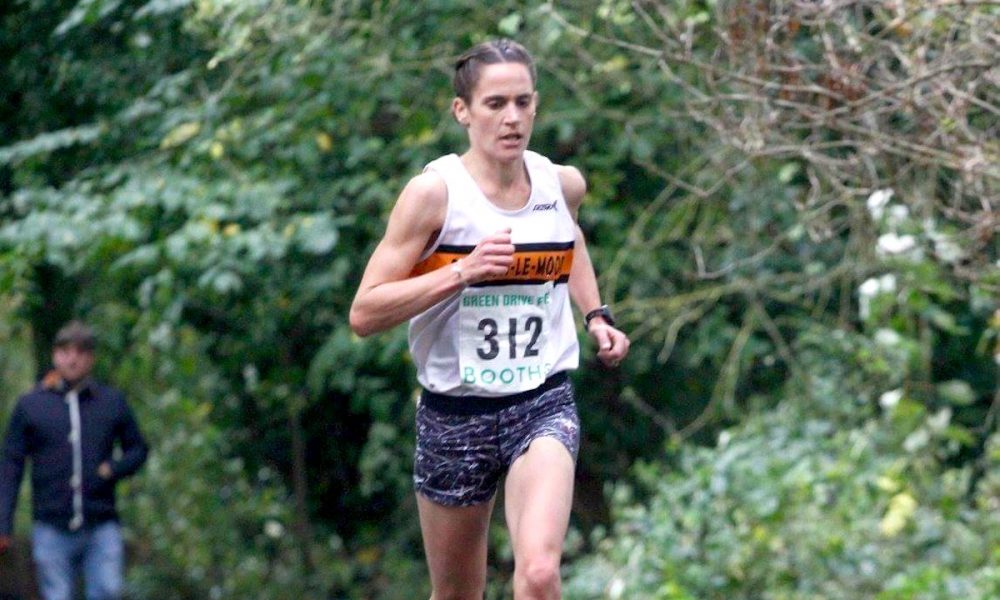 The goals may have changed but the former footballer is now making a big impression on the running world. She shares an insight into her training.

Clayton le Moors and Burnley AC’s Laura Hesketh has successfully swapped Burnley Football Club spikes for running shoes over the last two years, earning her 5k and 10k PBs of 16:44 and 34:28 along the way.

The skilled striker regularly made the headlines during her two decades at Burnley Ladies, scoring prolifically for the Lady Clarets, including a hat trick in one of her last seasons at the club despite having only run a marathon less than two weeks earlier.

Her recent victory at the competitive Salford 10k with a time just seconds shy of her PB, while still recovering from illness, was an early pointer of another year of progress for the relative new comer to high end domestic athletics.

Hesketh’s rapid rise up the rankings took her to another level last year, improving her 10k PB from 36:37 to 34:28 when she took the win at Wilmslow in November, pushing her into the top 40 of the UK standings.

She earned her 16:44 5k PB at the Manchester Sale Sizzler 5k series last July, where only international fell and mountain runner, Ambleside’s Sarah McCormack, kept her off the top spot.

Interestingly, her previous fastest time was posted at a Podium 5k race in 2016 – her 17:27 best posted back then was in the B race of the competitive yet back-to-basics event, though it would have been good enough for a third lady position in the A race.

The Podium races are clearly important events to Hesketh, and prove the simple but effective races organised by Chris Barnes have helped at least one (although in reality far more) athlete progress, with the Clayton athlete using them as a marker against high class competition.

Hesketh competed in one of the very first Podium 5k races in 2014, and returned four times the following year, improving her course PB from 19:11 to 18:17 in less than 12 months.

A quick glance at the former football ace’s Power of 10 shows she’s certainly a fan of racing local to her Clayton roots in the North West of England, highlighting the fact that it isn’t always necessary to travel the length and breadth of the country to race well.

Here we chat with the Lancashire V35 athlete about her training, how she juggles it with children and a full-time job and whether she thinks her relatively fresh legs have helped her progress so impressively in her thirties.

Some sessions I know I will run better than others so this is just a good marker to see where I’m at.

Wednesday
Another steady hour’s run, depending on what time I have.

Thursday
Track session, this time with shorter reps, such as 200m and 300m reps.

Saturday
If not racing, a steady hour’s run with some strides.

My steady runs can be at a variety of pace depending on if I’ve raced or just how tired I am in general. They would normally be around 7- 7:30min/mile pace, but I don’t get too worried if they are a little slower.

There is no escape from hills around where I live, which is good for training and I know I’m not going to be running at race pace. I go off how I feel rather than clock watching too much.

Whenever I can I try to get off road when out on a training run. My long Sunday run is usually a mixture of fell, trail and road. I find this keeps the training interesting and also gives my legs a bit of a break.

Fast Running: Could you tell us about your win at the Salford 10k?

Laura Hesketh: I just really wanted to see what shape I was in. After being ill over Christmas it had taken a while to get back to where I was last year, so I was really pleased to not be too far away from my PB.

There were two of us pretty much together for all of the race, and luckily I managed to just pull away in the last mile to get the win.

FR: You’ve made significant improvements in your race times in recent years, particularly over the 5k and 10k distance – to what do you attribute these improvements?

LH: I have been very lucky in that I have managed to keep my training very consistent and not pick up any serious injuries.

I have a great coach in Phil Hall, who has years of experience. He tells it like it is and I wouldn’t be running the times I am now without his help. I’ve benefitted so much from him coaching me. It takes the pressure off you as an athlete, as you don’t have to think about things too much. Just turn up and train hard.

I run for Clayton Harriers and also Burnley AC on the track which is where I do most of my group sessions. Both clubs have some great coaches who have given me great advice and support over the years.

FR: You’re a running mum – how do you juggle it all?

LH: I have two daughters, Millie who is 9 and Erin is 7 years old. It is sometimes difficult to fit training in and I’m often out at 6am to get my runs done.

I’m very lucky to have a very supportive husband in Ryan and family as well, who are always on hand to help out when I need it. Ryan and the girls come to nearly all my races and it means a lot for them to be there cheering and pushing me on.

FR: Do you work, and if so how does your training fit in?

LH: I work as a teaching assistant at a local primary school, which fits in perfectly with having young children myself.

I’m lucky that I don’t work long hours doing a stressful job, and that makes it easier to be able to get out the door and fit my runs in.

FR: What are your favourite and least favourite running sessions?

LH: My favourite sessions have to be any kind of speed session, especially on the track.

These are also the toughest sessions, but also I feel are essential to running fast times.

FR: Why have you only recently started competing seriously?

LH: I played football from the age of 11 for Burnley Ladies, and only ever really ran as a way of keeping fit for that.

I only stopped playing a couple of years ago, which is when I decided to concentrate on running.

FR: Do you think the fact you’re a relative late comer to competitive running has helped you progress and continue to improve at the age of 35?

LH: I definitely feel I have benefitted from starting out late to running. I know some athletes end up burnt out quite young because of the amount of training they did when they were younger.

I also feel I’m much more focused and driven now than I was when I was younger. With age, I’ve learnt to listen to people who have ‘been there and done it’ and take their advice on board.

I turned 35 last month so I’m now classed as a ‘veteran’, although I still feel I have plenty of time left to keep making improvements.

There are some amazing veteran athletes out there still competing at the top level, and I hope I can be up there with both the seniors and vets in the years to come.

FR: What would you say was your biggest strength, and what area do you think you need to work on most?

LH: Due to all the years of playing football I have always had speed over short distance, but have had to work hard on my endurance.

And now starting out late in running I’ve had to learn to be patient and develop gradually, as I didn’t have the base many of my competitors had.

FR: What race distances are you aiming to focus on over the rest of the year?

I’d like to keep chipping away at my 5k and 10k PBs, and hopefully another good summer of training will help me achieve this.