Allie Kieffer is flying high after breakthrough in New York 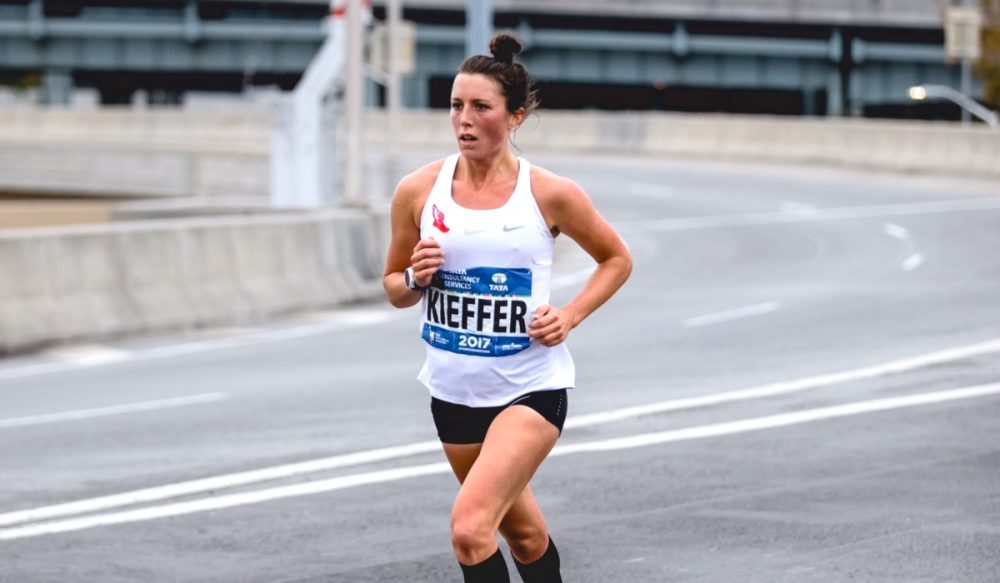 How did this relative unknown make such a life-changing jump in performance when, until as recently as July last year, she was working full time as a nanny, with no sponsorship, no funding and no coach?

Kieffer had by no means come from complete obscurity, though.

Talented and grafting from an early age, she earned the prestigious All-American honours at high school before winning an athletics scholarship to Wake Forest University, followed by a year at Arizona State.

She spent the ensuing three years concentrating on the track and road – with her efforts rewarded with PB after PB – but a coaching change saw her move to Boulder, Colorado in 2012 to join the Olympic Development running group Hudson Elite.

There she ran a US Olympic Trials 10,000m qualifying time of 32:25.69, but a subsequent injury – in part due to an enforced restricted diet which she now regrets (see Allie’s excellent article in Self magazine for more) – saw her having to withdraw from the trials.

The combination of the injury and financial struggles led to Kieffer’s motivation reaching an all-time low, and, feeling like she’d achieved all she could in athletics, she moved back to her home city of New York in 2013 to work full-time as a nanny for four years.

She continued to run – initially to make friends – but soon enough she discovered her innate competitiveness was still well and truly alive. Following a stint of being trained by renowned coach Steve Magness, she decided to go it alone, her confidence boosted by her success in coaching other athletes to marathon PBs.

2016 saw her race every distance from 5k to the marathon – firstly, winning the Miami marathon in a debut 2:55:30 after only deciding to run the distance the night before, and secondly, breaking the world indoor record by six minutes with an astonishing 2:44:44 result just three months later.

Perhaps because earning money from racing was her primary concern – and not running for running’s sake – she took the second half of 2016 off running completely, choosing instead to travel with her boyfriend before returning to New York state to live in Buffalo in 2017. 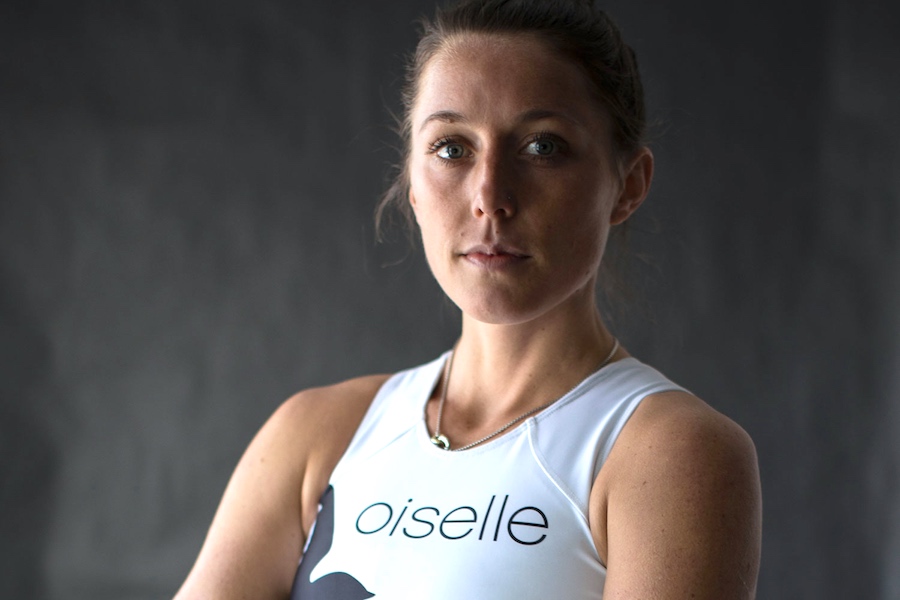 This was the year when the combination of rediscovering her track form and winning selection for a place on an exciting Nike-sponsored elite training programme – Nike Project Moonshoot.

The programme is an offshoot of the Breaking2 project, where the company chose a select number of sub-elite New York resident runners to support in their ambitions for the marathon – led to her realising she still had a whole lot more to offer to the top end racing circuit.

Fast Running talked to the exuberant 30-year-old this week while she was out in Iten, training with Kenyan track star, Betsy Saina. Kieffer had arrived fresh from winning the Doha half marathon in a 70:40 PB to beat Britain’s Gemma Steel.

From speaking to Kieffer you soon discover that hard work and determination played just as big a part in her success in the New York marathon as that game-changing chance from Nike to concentrate on running full time, with all the elite-level support that came with it.

Fast Running: Firstly, it’s great to hear you’ll be running the London marathon in April! How do you feel about coming to the UK?

Allie Kieffer: I am very excited to compete in the English capital city! I have not been to London yet, so if anyone wants to pass along a list of sights to see after the race I would be delighted!

FR: Your performance in New York was hugely impressive. Can you give us an insight into your training in the six months building up to the marathon?

Since I was doing more mileage in workouts than ever before, instead of running lots of loops around the track, I decided to stick to the roads for all of my workouts. When training for a specific event I try to make the training as specific to the race as possible, so for the NYC marathon that meant repeating hills and asphalt!

I like to run easy runs quite slow, but in the lead up to NYC I increased my normal pace to 7:15min/mile for almost every non-workout run.

Weightlifting has been a big part of my training (and I think improvement) this year. I lift twice a week, here’s what a typical gym session includes:

Day 1: 4 sets of everything, 5 reps (on each side for single leg)
Squats, Strict press (2 sets) and push press (2 sets). I just increase the weight for the push press.
Single leg Romanian deadlift
Pull-ups or dips
Calf raises with weight

Day 2: 4 sets of everything, 5 reps (on each side of single leg)
Backwards lunges
Deadlifts
Single leg squats no weight
Cleans
Push-ups

FR: Can you tell us how big a part your participation in the 16 week long Nike Project Moonshoot played in your preparations for the marathon last year, and what is involved?

AK: Project Moonshot was a game changer for me. Because of Nike’s support I was able to afford massages, physical therapy, and a gym membership.

In the build-up to the marathon, I only had a few spectacular workouts, but I had weeks of consistently good efforts, mileage, and gym sessions.

The 16 weeks of consistent work was only possible because of the project, and I will be forever grateful for the opportunity they gave me!

FR: Looking back to 2012 when you sustained your stress fracture following a period of trying to drop weight, you took some time out from competitive running. Can you tell us about that?

AK: I ‘retired’ in 2013 and moved to NYC. At the time I did not have a sponsor and was going through a rough patch in running where I wasn’t placing at the top of races anymore.

I just ran out of money and the ability to afford the lifestyle I was living as a ‘pro athlete’. I thought I had achieved everything I could in the sport and was happy to walk away as an Olympic trials qualifier.

After moving to NYC I ran merely as a hobby and a way to make friends in a new place. Over time one thing led to another and by 2015 I was training again. In the fall of 2015, I started coaching a very good marathon runner – as he improved I could no longer keep up, so I started training seriously in 2016 to be a better coach for him!

It wasn’t until 2017 that I fully committed again to the lifestyle that is necessary to be at your best!

FR: You were a nanny until July 2017 – how did you manage to train alongside full-time work, and how did you finance running after giving up work?

AK: After I hit the world standard in the 10,000m at the Portland Track Festival this past June I decided to focus 100% on running. Thankfully I had good people around that supported that decision. Leading up to NYC I made the decision to be thankful for what I had instead of focusing on what I didn’t have.

Of course, I have more opportunities now and support to run even faster, but we shouldn’t let it go unnoticed that you can make it very far without fancy contracts.

FR: Can you tell us a little about your deal with American clothing company Oiselle – how are they supporting you?

AK: Teaming up with Oiselle has been an incredible opportunity! My favourite aspect of being part of the flock is their investment and support in me as a person.

Most companies are looking to buy great results, while on the other hand, Oiselle is interested in relationships, community, and building one another up!

FR: What do you enjoy doing outside of professional athletics?

AK: I love to cook and travel! I am currently in my 31st country! Also, at the end of February, I am starting a holistic nutrition class!

FR: Who has been the most important support to you in your athletics journey so far?

AK: My family and boyfriend have been incredibly supportive over the past year. Without them and the help from Nike’s Moonshot Project and my long-term sponsor, the New York Athletic Club, I don’t think I would have accomplished all that I did last year.

This year, I am really excited to build upon 2017 and see what I can accomplish with the wings from Oiselle!

How far will you go to reach your goals? . . . I’ll be in Kenya for the next few weeks in the buildup for my next #marathon! Details to drop Jan 25th😜 . . . #RunLikeAGirl #teamworkmakesthedreamwork #oiselle #flystyle #headupwingsout #nyac . . . 📸: @dym9005

It’s no wonder this bright talent is excited about her future now she finally has everything in place around her to ensure she can concentrate on fulfilling her potential without distraction.

Kieffer’s long-term plans include running either the 10,000m or the marathon at the Tokyo Olympics in 2020, but more immediately her sights are set on the London Marathon, and, potentially, yet another PB.