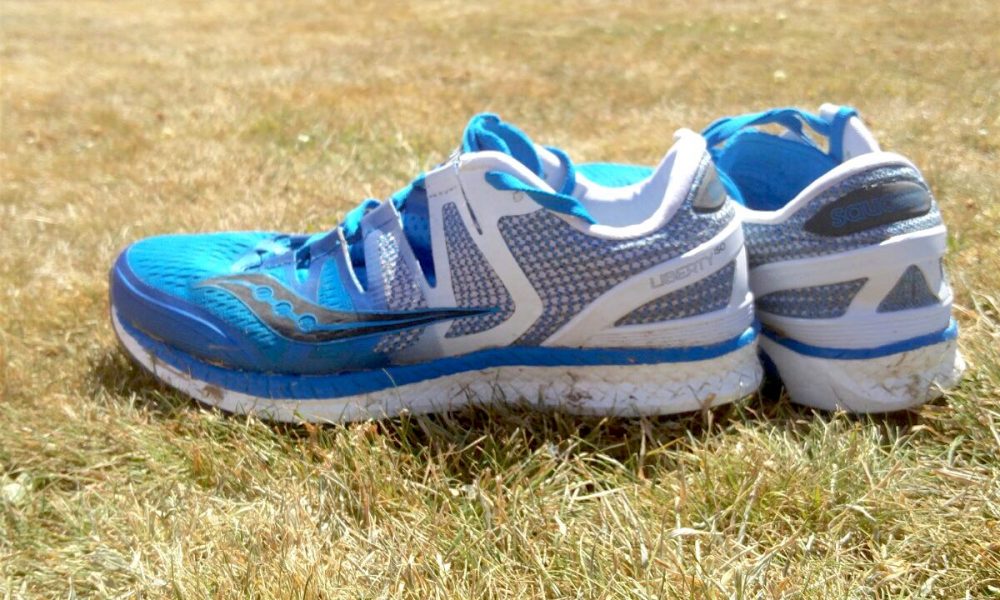 The Liberty ISO is Saucony’s stability version of the Freedom ISO and after 80 miles of running what’s the verdict? Does the extra stability come at a cost?

Saucony’s Freedom ISO was the first shoe with a full-length Everrun midsole, this is similar to the Boost foam found in Adidas shoes but a bit firmer. The Liberty was next to incorporate this midsole and I was keen to test them out on a few easy runs initially, before seeing how they faired in faster runs.

I found them very responsive on firm ground, both road and grass and comparing the Liberty to the first version of the Freedom there are a lot of similarities between the shoes, including the upper fit.

As mentioned this is a stability shoe and the support you get is certainly the main difference of this shoe over its sister. The stability comes from the inner midsole, the added structure of the upper and the heel also locks nicely in place. The guidance frame on the medial side of the shoe certainly helps to provide added stability as well.

The shoes aren’t ‘too restrictive’ though and those who like a natural feel or usually choose a neutral shoe can certainly go for the Liberty as the support features are mild.

Are these for easy runs, sessions and/or racing?

The Liberty is a good training shoe and I found it comfortable and responsive for every day easy runs for anything up to 12 miles with good shock absorption and a good return of energy. Personally, long runs of 16 miles or more I would probably go for something with a bit more cushion.

In terms of the terrain and speed work, the shoes were tested on road and firm grass and sessions were fast. Although I didn’t race in the shoe I would happily wear it for a 5k road race up to a half marathon. Faster runners would probably go a lighter shoe for a 5k to 10k, but if you are in the 33 minute plus 10k range the Liberty is a good choice.

As mentioned this is a firm shoe with ‘some bounce’, but when it comes to a marathon I like a bit ‘more bounce’. However, if you happily see out 26.2 miles in a pair of Adidas Tempo or Saucony Kivanra or Freedom, you could comfortably do it in the Liberty too.

The heel drop of the shoes is 4mm and some runners who are not used to low drop shoe may require a bit of time to be accustomed to the shoes, but this is the same with any low drop shoe.

Rival shoes that I have tried out would include the Adidas Adizero Tempo or the Boston. You could say the Liberty is somewhere in between the two.

Finally, though it doesn’t happen too often, in some other shoes that are snug fitting I do occasionally overpronate on my left foot, but with these, there were no such issues. A big plus in my book.

Shoe review: Hoka One One Evo Jawz
Shoe review: running on ‘clouds’ with the On Cloudflyer