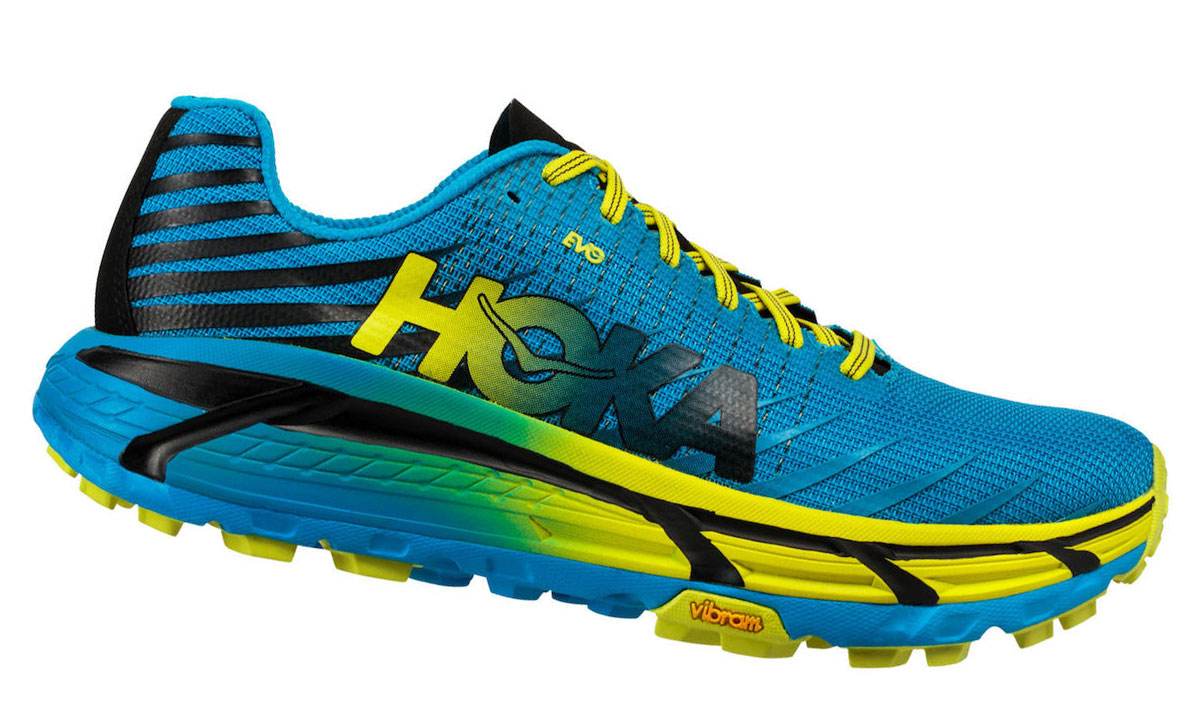 Firstly, let’s be clear, Hoka One One provided this shoe for review, but I also did request it. I’ve run, on and off, in Hokas for a few years now and all those super fast chaps they sponsor had been cruising around in these, so I figured I wanted to give it a try.

In 2018 the Hoka Torrent had provided some smooth riding for the Gorce 100k in Poland, whilst the Evo Jawz got me through the Three Peaks Fell race and a 56km Italian ultra, but had let me down at the Marathon du Mont Blanc by a rock piercing straight through the sole. They’re a light weight racing shoe so maybe I asked a little much of them.

So I wondered if the Evo Mafate was the middle ground between those two. A racer with good cushioning and tidy grip for those hills.

The grip is a Vibram mega grip so you know it’s solid and maybe a step up on the Torrent’s home grown Hoka grip. As the shoes are used for racing by many I figured the Evo Mafate might come in a little lighter than his friends the Speedgoat 2 or the Torrent, but that wasn’t the case.

It was actually a little bit heavier. I put that down to the solid grip and a bit more durability, but it was a little disappointing to start with. The Torrent is actually the lightest of the three.

That said, when the shoe is on your foot and you’re running up or down a mountain it doesn’t feel heavy. It actually feels like a smooth ride and that could be down to the meta-rocker in a lot of Hoka shoes.

This shoe is built with extreme endurance challenges like Diagonal des Fous on Reunion Island, so it’s built to last and that comes across.

Over a hundred miles in and the shoe is showing very little signs of wear and tear. It still looks shiny, pretty and super blue, but it might have to wait for a few more miles as snow has hit the ground in the French Alps.

A mainstay in the Hoka collection is the super cushioned shoes that make you feel like you’re barely in contact with the ground.

While the Evo Mafate does provide good cushioning, it does not feel like you’re totally out of touch with the floor like some other cushioned shoes. They’re stiff and you can feel what’s running underneath you, which is something I like about the shoe. I find if I run in maximal cushioned shoes too much then my muscles take more of a hit. You’re just hitting the ground with more force because that proprioception isn’t there as much, but the Evo Mafate didn’t feel like that as much as some of the very early Hoka models did many years ago.

That said, I wouldn’t run in this shoe every day, for that reason. I see the shoe as one suitable for long runs and races when you need the cushioning, and also for shorter runs in between to let feet and muscles have a bit of a break.

The Torrent is lighter than the Evo Mafate and for a race not too long, maybe 100km or less, I would choose the lighter shoe as it’s pretty durable. For something bigger and tougher I might go for the more durable Evo Mafate or the Speedgoat 2, which I have raced in a lot in the past.

The biggest difference for me that will make a difference is the cost.

At £150 RRP, although you can get it a bit cheaper, it is an expensive shoe and I don’t think I would have purchased it myself. I have bought the Torrent (£100 RRP) and the Speedboat 2 (£120 RRP) myself in the past.

Well, it’s a wonderful running shoe. Tough, durable, fast feeling and well cushioned. It looks mighty fine in electric blue and feels like you’ll get many more than the standard 500 miles out of it. Yet I’m still undecided if it works out as a £ per mile bargain.

I will be running in this shoe in 2019, it’s a joy to train in, but maybe a little heavy for me to race in. I wouldn’t buy it myself, but that’s just because it’s out of my budget more than anything.

I’ll update this in the middle of the summer to see how the shoe is holding up with more miles logged.

Shoe review: running on ‘clouds’ with the On Cloudflyer
Zero drop road running with the Altra Escalante