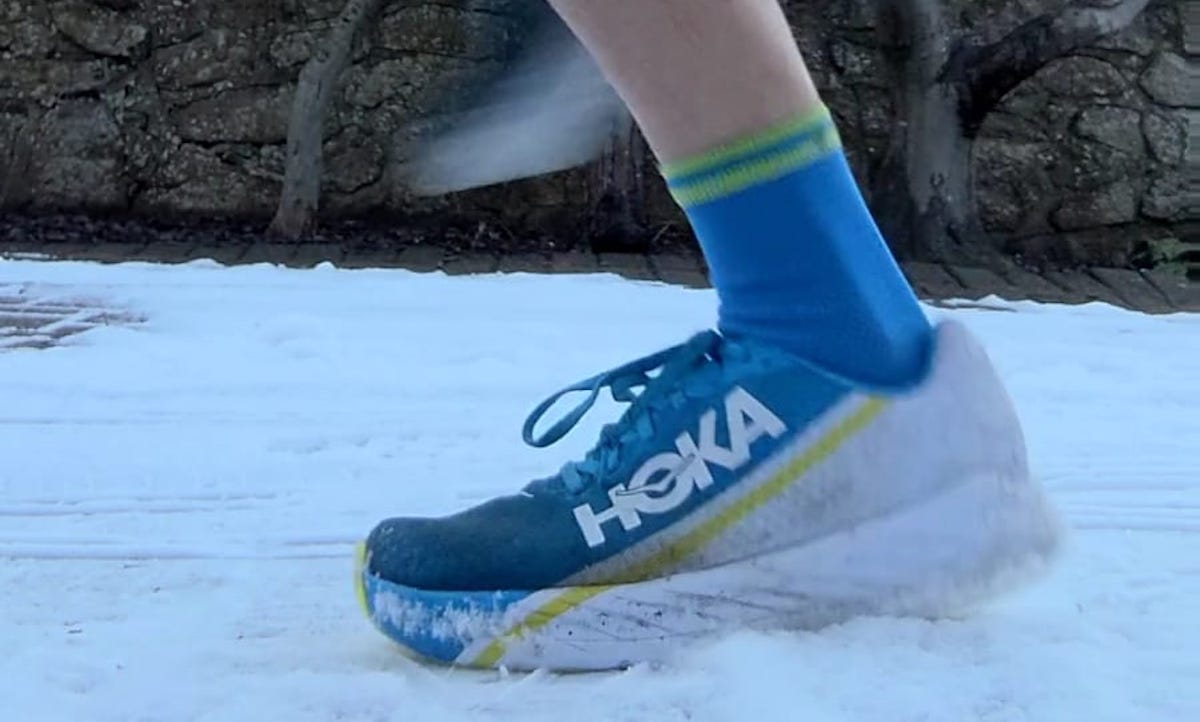 In the first of three Hoka One One shoe reviews from Gill Bland, we start with the speedy Hoka ONE ONE Rocket X.

Carbon plated superboosters you’ll want to wear all the time. But do they have that race-day sparkle?

By far the most normal feeling of the carbon plate shoes, Hoka position this as a racing flat for shorter distances. Interestingly, this is an all-gender shoe (meaning there is no weight difference between men and women’s sizes. I’d put these up against the Nike Air Zoom Tempo Next %.

Having tried Hoka’s Carbon X  (which they suggest for longer distances), I thought they were a little aggressive in their rocker and hard underfoot. These have none of that. They are instantly comfortable.

The first time I wore them was three days after a marathon PB (run in a another brand) when my legs should have been trashed but it felt like someone had taken the handbrake off. I want to wear these every day. I know I shouldn’t train in carbon plated shoes but they are so comfortable and so much fun to run in that I can’t help it.

How do they compare?

Much like other racers in the market the upper is very light with not much structure, though they do have more to hold your heel in place that competitors. The grip is surprisingly good. I’ve recently moved to an area with permanently muddy roads and wearing the Nike Tempo Next % would be asking for a sprained ankle, but the Rocket X handle the situation with aplomb.

As with the Rincon and other shoes, Hoka use the “early stage metarocker” to help you cycle through your gait, but you really don’t notice it.

The “CMEVA midsole” allows for a  stable footing and absorbs impact so that unlike other carbon plate shoes it doesn’t seem to need you to run in a certain way to reap the rewards.

That said, at the moment I don’t think I’d pick these for a race. I can’t put my finger on it but perhaps it’s the fact that they do feel so “normal” even though the pace says otherwise. I don’t feel that frisson when I put them on. But I want to put them on ALL the time, in fact if I want to run slow I have to make sure I don’t put them on. Aaaah I’m so torn.

For comparison (mens weights): Hoka ONE ONE Carbon X = 241g

Pros
Fast, instantly feel comfortable and just a whole bunch of fun to run in

Cons
Pitched as a shorter distance racer which implies some concern about wear
Don’t have that race “sparkle” feeling of other ones on the market
I’m clutching at straws here – but you’ll want to train in them when really they should be race-day shoes (That feels a little contradictory with the last “con”. Ha – Editor)

Feeling the Endorphin Speed
Finding the shoe that fits