WR broken in Larne, British success in the mountains – roundup 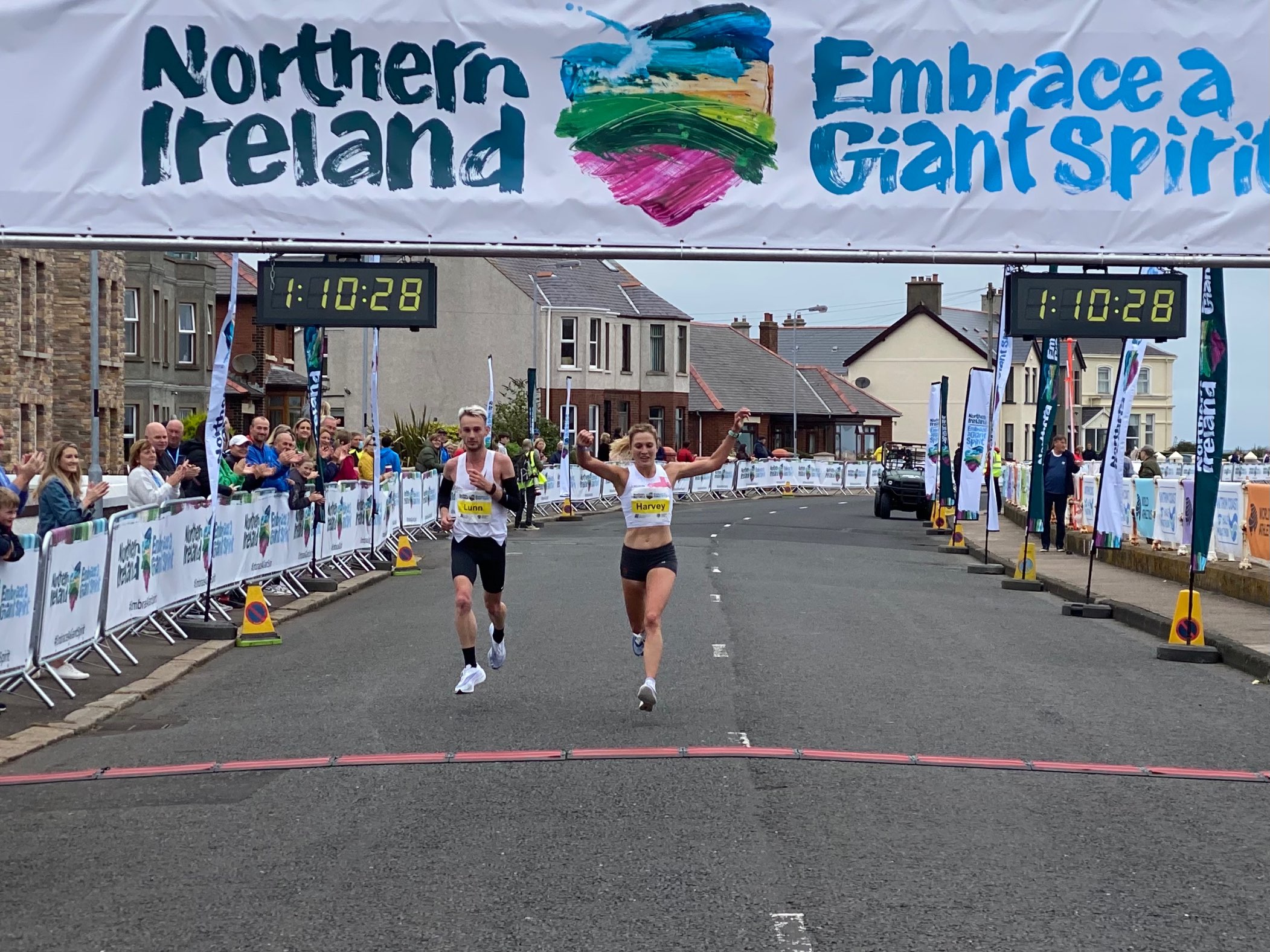 Another action packed week as James Rhodes brings you all the action from the roads, tracks and mountains

Road running has definitely returned with a bang in the UK; whilst last Sunday’s Big Half in London saw some good performances, the Antrim Coast Half Marathon took that to the next level, thanks to a new World Record of 63:44 set by Yalemzerf Yehualaw. That time improves the yet-to-be-ratified time by Ruth Chepngetich, set in April in Istanbul, by 18 seconds and sees the Ethiopian become the first woman in history to run under 64 minutes for the distance. Her margin of victory ahead of second placed Vane Nyamboke of Kenya was equally impressive at six minutes. The top three was completed by a superb run from Rose Harvey, who took almost five minutes off her PB with 70:29.

George Schwiening ran a four-minute PB (71:13) for fourth, whilst Kirsty Longley’s 75:18 puts her fourth on the V45 all-time UK list. There were fine runs too for Chloe Richardson (74:58), Sophie Wood (75:15) amongst many fine displays from Irish athletes (details to come in our Irish roundup). Becky Briggs’ time of 73:32 represented at fine return to form after her marathon debut at Kew. In the men’s race, it was a close race with the top three separated by only two seconds. Jemal Yimar just got the better of his Ethiopian compatriate Tesfahun Akalnew (60:30 to 60:31), with Kenyan Shadrack Kimining (60:32) third. Marc Scott ran well to keep immediately with the leaders until the last kilometre, finishing with a four second PB of 60:35. “Not good, not bad” was his description post-race. Amongst the many fantastic domestic performances in the men’s race there were big PBs for Fast 10’s Nigel Martin who finished fifth in 63:22, Ross Skelton (63:40) and Jonathan Escalante-Phillips (64:15). I will give you three reasons why three hours of athletics action on Thursday night was special. It was apt that the first European Diamond League post-Tokyo was in Lausanne, home to the Olympics. Not only that, it was poignant to be the first athletics competition since COVID entered our lives to be held in a full capacity stadium, with over 12,500 spectators present. Finally, I got to be there for Fast Running. What a treat!

There were Diamond League debuts for Tom Randolph and Ellie Baker who have both had an excellent season, setting new lifetime bests over two laps of 1:44.98 and 1:59.54. Their good form continued as they both took race victories, with Ellie crossing the line in 2:00.45 and Tom in 1:47.52. Charlie Grice finished third (1:48.44). The ‘a’ race featured the top three from Tokyo and was won by Canadian Marco Arop. Despite the effects of jetlag associated with racing in Tokyo and Eugene, Jemma Reekie ran well to finish fifth in the1500m, only her second outing of the year over the distance (4:04.72) Katie Snowden, who told me afterwards she had struggled with tiredness since returning from Tokyo finished eighth (4:09.81) in her first race since the Olympics.

A much-publicised 3000m didn’t quite live up to the high expectations many had given it, where there had been much talk of a European Record attempt by 1500m Olympic Champion Jakob Ingebrigtsen. Whilst (many) eyes were on the Norwegian as he sat closely behind race leader Stewart McSweyn for the opening laps, the duo building a commanding lead from the rest of the field, it became increasingly evident that they were not on record-setting pace. Following a last lap burn up, Jakob took the win in 7:33.06, seven seconds slower than the European Record. Scot Andy Butchart failed to finish.

In the last 18 months there have not been many opportunities for me to experience world class athletics in person, so please indulge me for a short while as I bring you two highlights of the non-distance events that I, and 12,500 other people, got to witness.

On the track, Shelly-Ann Fraser Pryce was the star of the show thanks to an incredible 10.60 in the 100m, the third fastest time in history. Only Elaine Thompson (five days earlier) and Florence Griffiths Joyner have ever run faster. Some people may attribute such a performance to shoe technology, track surfaces or something else, but much like we’ve seen in both 400m hurdles, there are two formidable athletes in Thompson and Fraser Pryce pushing each other in a way they have not before; prior to 2021, the duo had only raced each other five times. This year they have matched that number, and there’s undoubtedly more to come. It was magical to witness that alone.

In Tokyo, Yulimar Rojas not only won triple jump gold but broke a World Record that was set the year she was born. Originally entered for the long jump in Lausanne, the Venezuelan signalled her intent three days beforehand by switching to her favoured event. It was worth it; she set the second best mark in history with 15.52m (further than InessaKravets’ previous 15.50m WR set in 1995) as well as a wind-assisted 15.56m. All of her jumps were over 15m. It was not just the greatest performance I saw in Switzerland, it might have been the best I’ve ever seen live.

Racing in the Alps

This week saw the Ultra-Trail du Mont-Blanc (UTMB) take place across the French, Swiss and Italian Alps, with four races between 55km and 170km in length.

Highlights from a British perspective include Johnathan Albon and Robbie Simpson battling it out for the top two positions in the OCC at the start of the week. Robbie was strong on the uphill sections of the 55km course and John on the downhill sections, and the downhill finish saw the latter secure the win in 5:02.57, taking 17 minutes off the course record in the process. Robbie finished second less than three minutes behind (5:05.35). Sophie Grant went in the TDS, a race covering 147km with 9000m of elevation gain. She finished equal fifth in a time of 24:48:54. Unfortunately, as we reported earlier in the week, a runner sadly died during the race, our thoughts are with their friends and family. Meryl Cooper finished sixth in the CCC, a 101km race won by Marta Molist Cordina of Spain. Sadly, a number of Brits dropped out in the UTMB itself, including Beth Pascal, one of the favourites to take the win, and Damian Hall. France’s François D’Haene (20:45:59) and American Courtney Dauwalter (22:30:54) took victories in the 170km event, their fourth and second wins respectively.

Just two days later the Diamond League moved to the French capital, with plenty of races to entertain another full stadium. The longer distances were led by a 8:19.08 3000m by Francine Niyonsaba, a time that only Sifan Hassan and the Chinese athletes of 1993 have bettered. Five of the six athletes behind her set lifetime bests, with Eilish McColgan in sixth just 0.36 seconds shy of her PB (8:31.36).

The domestic track season is drawing to its close, but for now there remains plenty of results to bring you.

Back to the Roads

With a winning margin of over four minutes, a time of 36:00 gave Alexander Barber a comfortable win at the Gravesend Floodlit 10k on Thursday, where Amanda Link (48:10) was the fastest female. On Saturday, Laura Thomas (36:38) and Thomas Colsell (34:12) were quickest at the Colchester Fast 10k, Laura finishing third across all entrants.

Across the border in Scotland, Duncan Robinson (31:32) and Jenny Bannerman (36:19) took wins at the Bellahouston Harriers 10k in Pollok Park on Friday. Two days later, the Blast Running 10k in Edinburgh provided Christina Rankin (38:30) and Gareth Haycroft (34:49) with wins.

A special shout out to end this week’s round up to Lithuania’s Aleksandr Sorokin, who has broken the World 24 hour running Record, covering an incredible 308.8km over one day in Poland. The live results give a total of 308.8km, with 23:55:26 on the clock, so it is highly likely that Sorokin surpassed 309km before the day was out.

This bettered the distance of 303.3km set by Yiannis Kouros in 1997, a mark that the ultrarunning community saw as unbreakable. You can read more about this fantastic achievement here.