World Record Holders and Defending Champs Set For Chicago Marathon, Which Could Include Paula Radcliffe 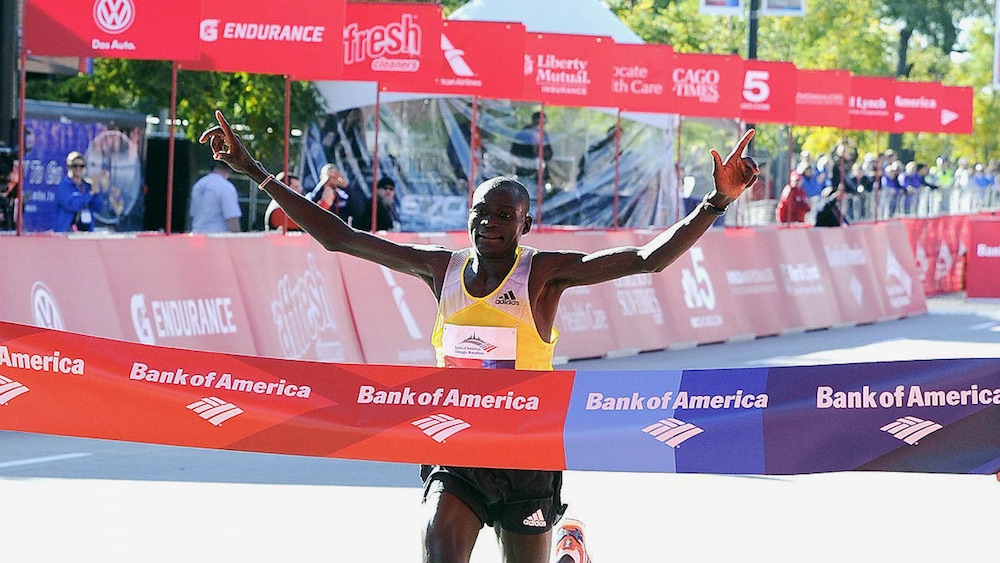 World record-holder Dennis Kimetto, along with defending champions Abel Kirui and Florence Kiplagat of Kenya head the international field announced for the 40th edition of the Chicago Marathon, while women’s world record-holder Paula Radcliffe could also make an appearance.

Kimetto returns to Chicago hoping to reignite his career after struggling with injuries in recent years. It will the world record holder’s first time racing in Chicago following his course record win of 2:03:45 in 2013.

The 33-year-old went on to set the world record of 2:02:57 at the Berlin Marathon in 2014, becoming the first athlete to run a sub 2:03 marathon. He still is officially the only athlete to break the sub 2:03 barrier outside the Nike Breaking2 project.

Kirui, who won Olympic marathon silver in London 2012 returns to defend his title after holding off Dickson Rhumba in a tactical race by three seconds last year.

While defending women’s champion Kiplagat will go for a third consecutive title in Chicago.

Radcliffe, who set a course and world record of 2:17:18 in 2002 in Chicago could make an appearance.

In a tweet on Thursday (18th August), the 43-year-old said: “Excited and honoured to be going to go back to the Chicago Marathon for the 40th Anniversary”

Following her 2002 win in the Chicago Marathon, the multiple major marathon winners, went on to break her own world record in 2003, clocking 2:15:25 in the London Marathon, a record that still stands to this day.

The marathon legend’s last competitive race was at the London Marathon in 2015, and at the time she said it was the end of her competitive career.

“It was so special and I’m going to really miss it. The magic of London made me run faster than I thought I was capable of. There is something about London, you can’t come here and not give it your best effort. I felt I owed that to London because it has given me so much over the years.”

But Radcliffe did also say: “I will always run and I will continue to run”, so while her participation is not yet confirmed for Chicago, it would be expected to be in a non-competitive way.

Three-time Olympic gold medalist and 5,000m world record-holder Tirunesh Dibaba of Ethiopia will challenge in the women’s field after starting 2017 by becoming the third-fastest female marathon runner of all time finishing second in London in 2:17:56. Her recent performance and track record could test Paula Radcliffe’s 2002 course record.

Also joining the international athletes are the American field which was announced earlier this year. It includes three-time Olympian Galen Rupp and Jordan Hasay.

Rupp, who won marathon bronze at the Rio Olympics will hope to put the disappointment of missing out on the World Championships behind him with a good performance in Chicago. The 31-year-old missed out on London 2017 after finishing fifth in the US 10,000m championships.

Hasay ran the fastest marathon debut ever by an American woman at the Boston Marathon in April and will look to continue her impressive progression in long distance running.

Also announced with the American field is 60-year-old Joan Benoit Samuelson who is aiming to become the first woman in her sixties to run a sub 3-hour marathon.

Samuelson is a former marathon world record holder and a winner of the Chicago Marathon in 1985.