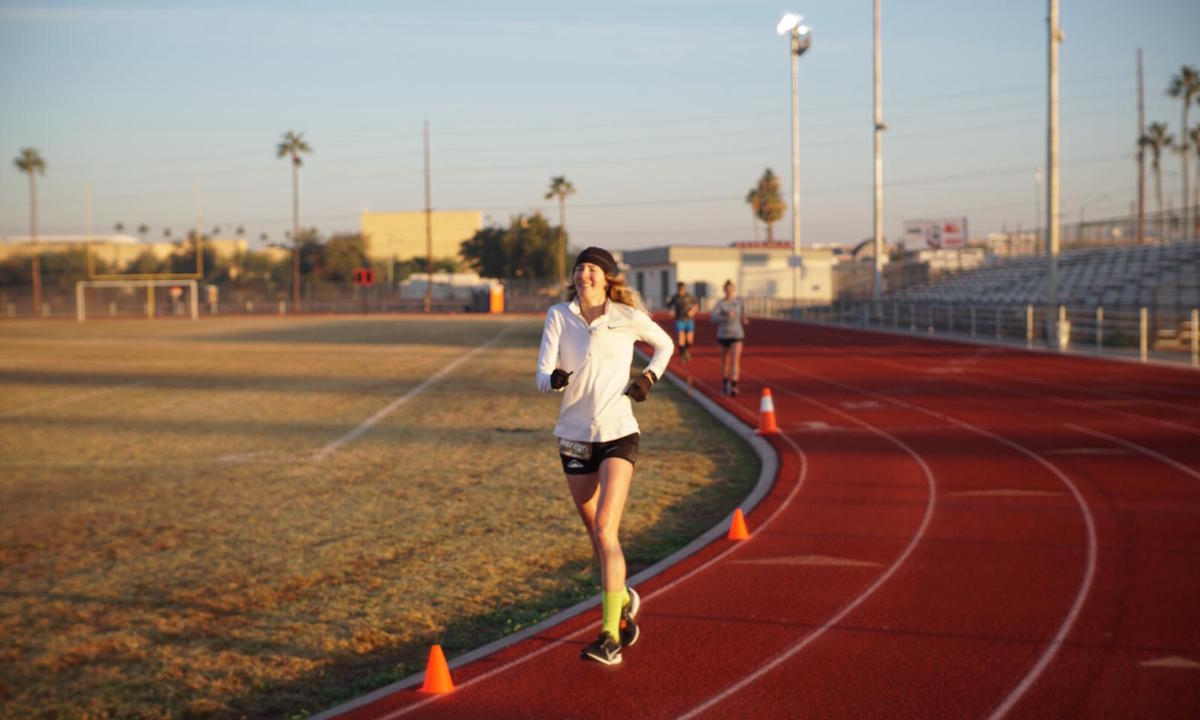 The Nike athlete broke the world record for 100 miles last year and set a 12 hour best too, but this is her first full effort at the 24hr distance.

The event, organised by Aravaipa Running, has 33 athletes running around a 400m track at Central High School in Midtown, Phoenix. Runners all have targets of open and age group National and World records.

When the gun went off at 8:00 on Saturday morning the intrepid runners all headed off casually around the first bend of many ahead. The goal was simple, to run as many laps as possible in a 24hr period. Apart from changing direction every four hours, there wasn’t much more to it. Sounds easy right?

The difficulty in this type of event often comes from pacing, fuelling, hydration, muscle damage or just sheer boredom. Runners with world class ultra marathon pedigree have come unstuck at 24hr races in the past and this weekend was no different.

One such athlete was world 12 hour record holder Zach Bitter. The Altra sponsored speedster set the early pace with Herron and went through 100 miles in around 13 hours, with Herron not far behind. Both runners looked like they were working hard and still had 11 hours left to run.

It may have been a little short of the American male 100 mile marker for track (which Bitter owns anyway), but Herron posted a 13:25:00 track 100 mile record en route to the 24hr. It had previously been held by Gina Slaby at 13:45. Such was the pace though Bitter, in his first 24hr attempt, struggled soon after and it was his body letting him down as Herron surged onwards.

Once the tall ultra runner with an unconventional stride hit the front of the race there was no looking back. Apart from a short blip around 18 hours, where Herron changed shoes and walked a few laps, the record of Patrycja Bereznowska kept her moving forward.

Using Maurten energy drink and Spring energy gels the tall former 100k World Champion continued to eat up the track ahead of her, but visibly slowed in the latter stages. The record predictor suggested we’d see the mark go at 21-22 hours but as the hours passed it looked like the buffer had gone down to fifteen minutes.

In the final 30 minutes we got closer and closer and only a full collapse would have stopped the record being broken. Some wondered if Herron would stop at the previous mark or just beyond, but it seemed to give her new life. Poland’s Patrycja Bereznowska has only held the record for under two years and the American wants to keep it for a while it seems.

Herron was supported by her husband Connor Holt and his crewing and encouragement seemed to play a big part in the success as teamwork is an important part of 24hr running.

What might be exciting in the future is that we have athletes like Herron and Berenowska competing in the same era. Often great athletes do not meet when records and limits are being redefined, but with other great females, like USA’s Courtney Dauwaulter and Poland’s Aleksandra Niwinska, all hopefully aiming to compete at the 2019 World 24hr Championships in Albi, France next year we might see the record go again.

It is an empowering time for women’s sport and there is no greater example than in ultra running. Not only are Herron, and others, beating all the men in their races, they’re also setting course records and running times that might turn the European and World championships on their heads too.

It’s worth mentioning that it was a good day for US men’s 24hr running too with a win in the men’s race (but second overall) for Jacob Jackson with 157.58 miles, and three other men also breaking 150 miles. School teacher Greg Armstrong actually ran his whole 155.09 mile distance in a fancy pair of sandals and his feet looked a little sore by the end. Kudos Greg. Watching the events unfold as Herron beat my own personal best too, all I can say is I better get out running again soon.