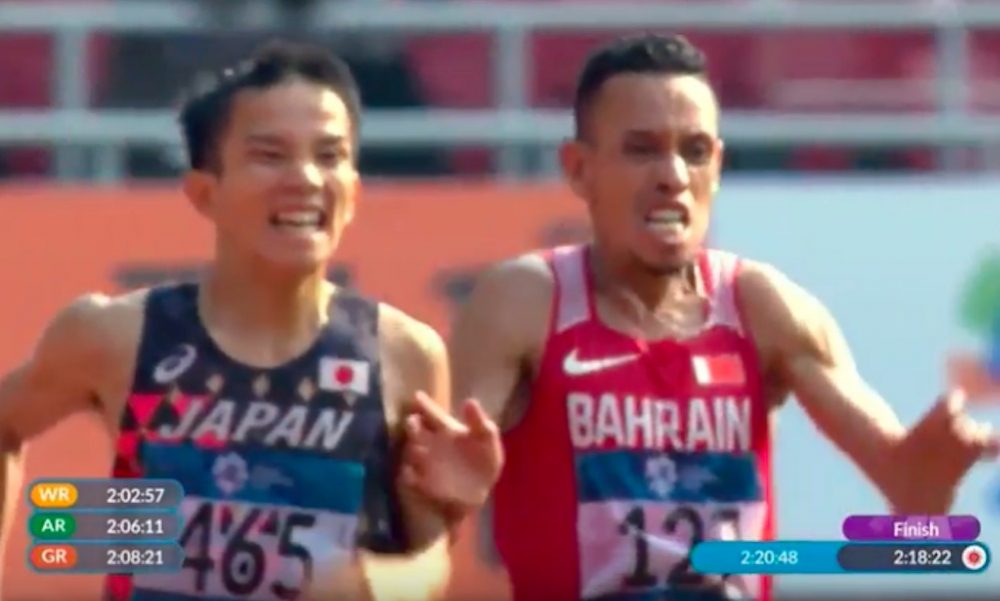 A tussle between Hiroto Inoue and Elhassan Elabbassi in the final 100 metres brings controversy to the 26.2-mile race.

Japan’s Hiroto Inoue won the marathon gold medal at the Asian Games after a tangle in the closing stages with Bahrain’s Elhassan Elabbassi.

The Japanese runner and his Bahraini rival entered the Jakarta stadium neck and neck after 26 miles. Then Inoue opened up a small lead and Elabbassi found himself slightly behind.

With no real room to get past on the inside, the Moroccan born Elabbassi attempted to, but failed, to get past the surging Inoue. Both athletes finished with a time of 2:17:22.

Race officials received a complaint from former Asian Games 10,000m champ Elabbassi at the finish line. The athlete has competed for Bahrain since July 2014 after a successful road career, including a 61:09 half marathon and 27:37 10k on the roads.

Both the athlete and his coach have claimed that the Bahraini would have won if it weren’t for the push.

“The Japan guy, when he saw he was almost overtaken, he decided to push,” said Bahrain team coach Gregory Kilonzo.

The Japanese athlete responded to claims with surprise. Inoue said: “I don’t know what happened before the end, I was surprised but I do not understand what happened.”

It is a reversal of the results from the 2014 Asian Games when Bahrain men’s winner Hasan Mahboob was one second ahead of Japan’s Kohei Matsumura and four seconds ahead of fan favourite Yuki Kawauchi.

Bahrain and Japan will likely duel again over the marathon distance on Sunday morning. The women’s 2014 podium was also made up of athletes from the two nations.