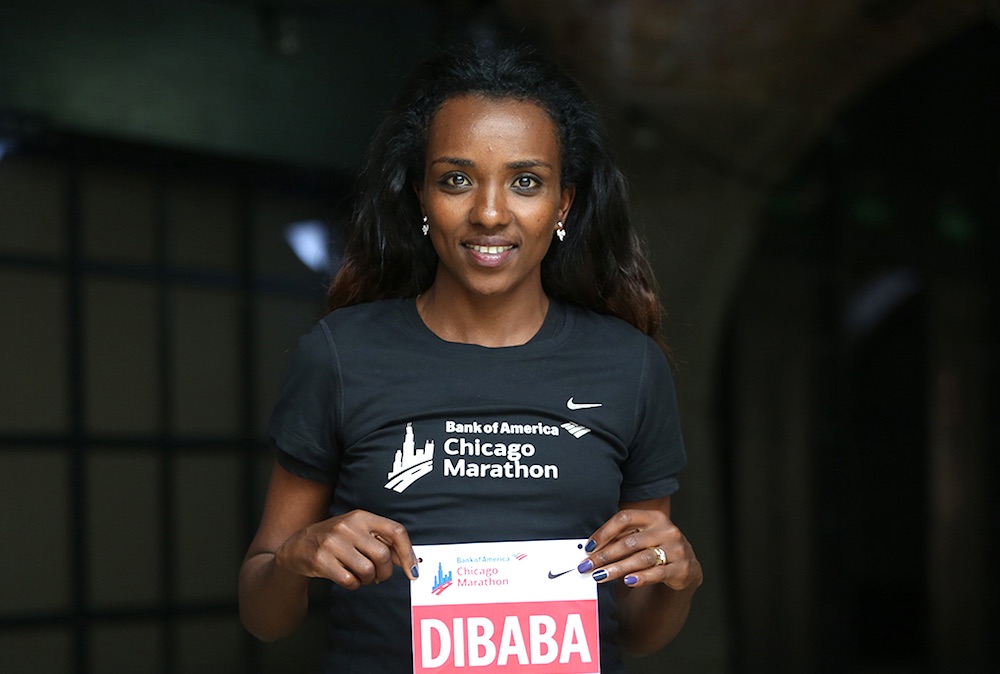 Marathon favourite Tirunesh Dibaba is targeting a personal best and victory in the Chicago, but insists she won’t “get complacent because the favourite does not always win”.

It’s not often that a two-time defending champion isn’t backed to win, but today in Chicago that’s the case. Florence Kiplagat, who won last year in 2:21:32, finished over eight minutes behind Dibaba earlier this year in London, and with two minutes between their personal bests, you can see why the Kenyan is not the favoured runner.

The London Marathon in April was only Dibaba’s second run over the distance and she produced one of the best performances in history running 2:17:56 to finish second to Mary Keitany. While she did not win in the English capital, the time catapulted Dibaba up the women’s marathoning ranks to number three. Only Keitany and world record holder Paula Radcliffe have posted quicker times.

“London was only my second marathon and I didn’t really know the distance that well, but I was happy with my performance. Prior to it I had one previous marathon race, then I took time away from running to give birth, before starting back to my training,” says 5000m world record holder, Dibaba.

Dibaba, who won 10,000m silver at the World Championships in early August, is confident that she can live up to the favourites tag and has her sights set on Paula Radcliffe’s world record during her career.

“I’m ready for Chicago and I hope to improve my personal best, that’s my first goal and then to win. I have been training for two months now after the World Championships to prepare for Chicago, and God willing I can run faster than I did in London,” she says.

Paula Radcliffe’s 2:15:25 marathon record has stood for 15 years and the closest challenge to date came this year from the top two at the London Marathon. That has given Dibaba the belief that she can be the one to break it.

“If it’s God’s will and I am prepared as well as possible, I believe I can break her record,” she says. “But, it won’t be easy, she ran a fast time and it hasn’t been broken in all these years.”

While she may dream about a record-breaking performance, she is not foolish and is well aware of pitfalls and unexpected moments the marathon can present on race day. She herself experienced such a moment in London when stomach issues forced her to come to a stop at 25 miles. She was able to regain her composure and continue with the race, but it did cost her close to 20 seconds.

“In the marathon, you just never know what can happen. I know I am the favourite going into Chicago, but in a marathon more so than any other race, the favourite does not always win. I will not be complacent and will be aware of that throughout the race,” says 2017 the Great Manchester Run champion.

When asked about her training in preparing for the marathon and some of her workouts she replies, “The marathon training has longer runs and in terms of the distance, some weeks we might run 200km, but sometimes it might only be 150km to 170km. But all of the training is hard and my least favourite workout is speed repetitions, they are always tiring.”

Apart from the extra running in training, Dibaba has found few difficulties moving up to the marathon, though she admits it has brought some pre-race challenges.

“The day and night before a race the amount of water I drink is the biggest difference. It’s not always easy to do, but people are always telling me I need to drink a lot,” she explains. “Apart from that, I prepare before a race just like I always have; I stretch, warm up, and rest.”

By competing at the World Championships in early August, Dibaba has had limited time to fully prepare for the Chicago marathon, but that was her last major championships on the track and the “marathon is her only focus now”. Her preparation for Sunday may not have been ideal and while the legs may feel the weight of a tough season at the end of the race, Dibaba should have enough to win and write another chapter in her marathon story.