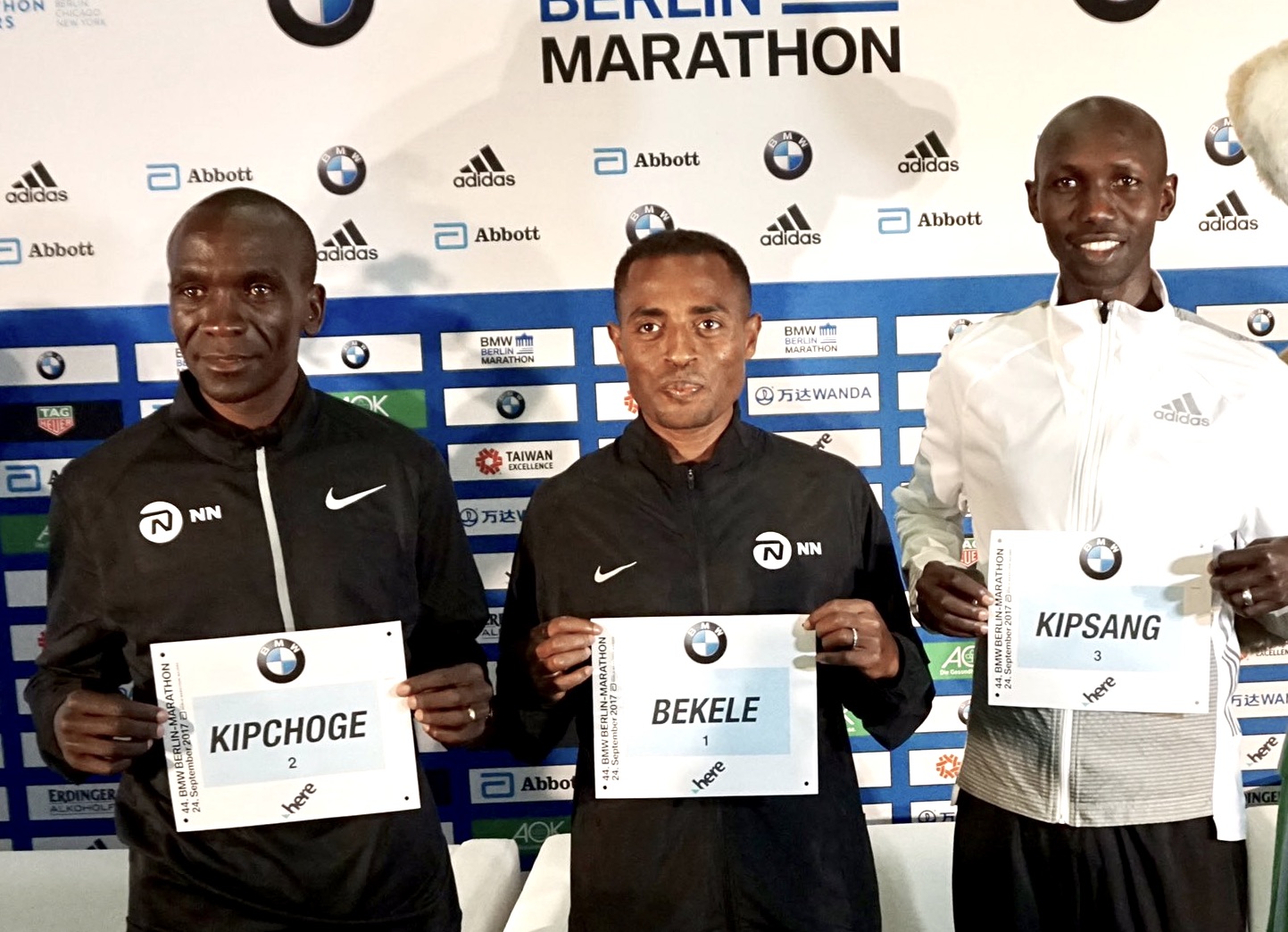 Eliud Kipchoge came within 26 seconds of breaking the 2-hour mark during the Nike Breaking2 project, and while such times can’t be expected tomorrow (September 24), the Berlin Marathon battle between three of the greatest marathoners in history is a race for the ages.

A marathon of this magnitude has never been seen, with the reigning Olympic champion Kipchoge, former world-record holder Wilson Kipsang, and Kenenisa Bekele, regarded by many as the best all-around long-distance runner, all ready to chase a world record in the German capital.

The three contenders have each run a marathon under 2:03:30 and all have the ability to break Kenya’s Dennis Kimetto world record of 2:02:57, set three years ago on the same course. Given what is likely to be excellent weather conditions on Sunday, an extremely fast race is in prospect.

In the Breaking2 project on the Monza’s Formula One circuit in early May, Kipchoge ran 2:00:25 but because of the user of interchanging pacers it didn’t conform to international rules and is not officially recognised as a world record.

“For me, this marathon was a big success and I have drawn a lot of motivation from it. I want to run the first half in 60:45 on Sunday,” said Kipchoge at Friday’s press conference.

Bekele of Ethiopia triumphed last year in the 43rd edition of the race in 2:03:03, the second-fastest performance of all time.

“I think I can run faster than last year,” he said. If Bekele breaks the world record in Berlin, it will not only be a historic marathon moment but in the history of athletics, no runner has ever held world records for 5000m, 10,000m and the marathon at the same time.

But he won’t be following Eliud Kipchoge’s example and going off fast. “60:45 has no place in my plans. I shall follow the lead if I can. That way I shall not put myself under stress and listen to my body. I am well prepared,” he added.

Kenyan Kipsang, who leads the world ranking this year after his 2:03:58 in Tokyo finished second in Berlin last year. “This time it’s a different situation (than last year), there are three of us. The pacemakers are stronger this time. I believe we shall have more support. A halfway split of between 61:00 and 61:10 would be good for me,” said Kipsang.

One thing is for sure, with Kipchoge intent on starting out at a lightning quick pace the duo of Bekele and Kipsang will trail, and as the miles build and build, the tension will surely follow, and for viewers, it will truly be a spectacle of the physiological capabilities of the human body.

How to watch the race?
In the UK, the recently launched sports channel FreeSports, will broadcast the race for free. Freeview channel:95 and Sky channel: 424.

In many countries, including Ireland, FloTrack has exclusive broadcasting rights and to watch the live stream a subscription is required.

If you have a German IP address, you can watch a free live stream here.

In the U.S. you can watch on the NBC Sports Network.