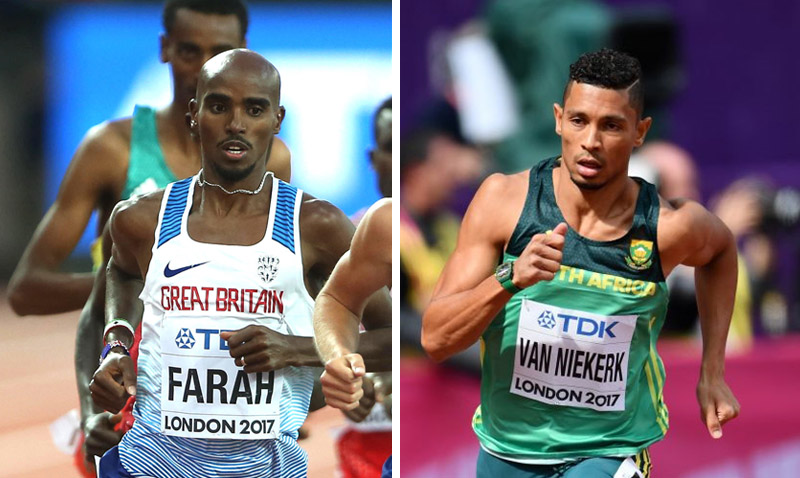 Mo Farah and Wayde van Niekerk are amongst the three male finalists for the IAAF 2017 World Athlete of the Year.

The finalists of three men and three women were determined following a three-way voting process from 10 male and 10 female nominees.

Van Niekerk wrote on Twitter: “such an honour to be recognized as a finalist again. Just to be mentioned alongside such amazing athletes is special“.

Almaz Ayana, the 10,000m Olympic and world champion, will contest the women’s award alongside Greece’s Ekaterini Stefanidi and Belgium’s Nafissatou Thiam. All three won world gold at London 2017 in their respective events, with Thiam adding the heptathlon title to her Olympic gold won at Rio 2016.

Farah who won retained his world 10,000m gold in London, recently revealed he’s leaving his coach Alberto Salazar and will return to London. The 34-year-old will be coached by Paula Radcliffe’s husband Gary Lough as he attempts to make his mark on the roads.

The 400m world record holder, van Niekerk, attempted to become the first man since Michael Johnson in 1995 to win both the 200m and 400m titles this summer. However, he was unable to replicate Johnson after missing out on the 200m gold.

The 25-year-old announced last week that he will miss the Commonwealth Games next year after suffering a knee ligament injury during a celebrity touch rugby game.

The nominees were announced last month, with fans voting online via the IAAF’s social media platforms and IAAF Council and the IAAF Family voting by email. The Council’s vote counting for 50%, while the IAAF Family’s votes and the public votes made up 25% each.

The World Athletes of the Year will be announced on stage at the IAAF Athletics Awards 2017 in Monaco on Friday 24 November.