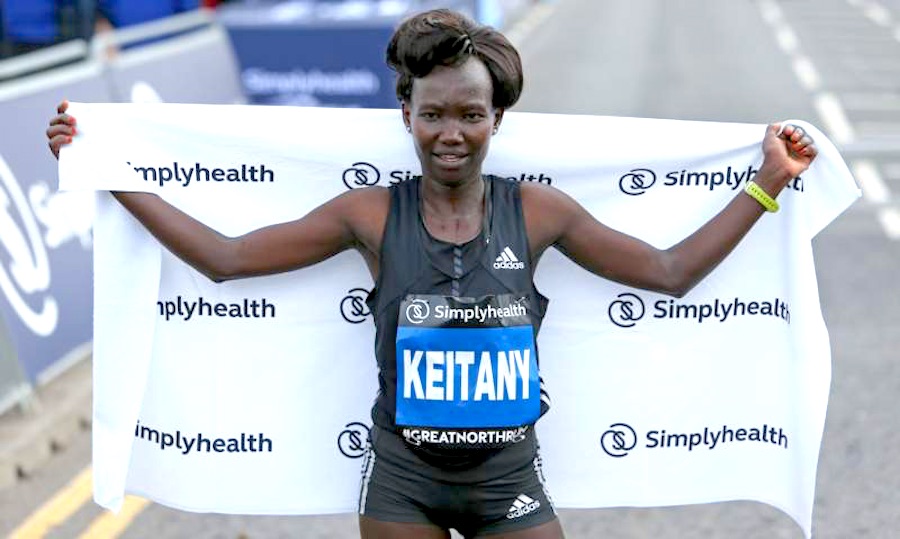 Caroline Kipkirui was third with 69:52. Britain’s Gemma Steel enjoyed her best run for some time as she clocked 71:32 for sixth, while Lily Partridge was seventh and second Brit in 72:10. Alyson Dixon, who was 18th in the recent World Championships marathon, was eighth in 72:29.

A small group of elite women set off ahead of the more than 50,000 in the mass start in Newcastle on the point-to-point, overall downhill course.

After a slow first mile from the start line in Newcastle, an increase in pace saw Keitany and Kiprirui clear through two miles. They went through the overall downhill first 5km in 16:01 before Keitany pulled away with a 5:04 fourth mile.

Keitany pushed on even quicker to go through 10km in 31:35 despite the uphill, enjoying at this point a 14-second lead over Cheruiyot as Kipkirui was dropping back.

A 4:47 and 4:50 seventh and eighth mile put the course record in jeopardy, but the 2009 world half-marathon champion, who also won here in 2015, eventually had to be content with the fourth quickest time in Great North history.

The remarkable Keitany, who holds the world record in a women’s-only marathon with 2:17:01, has now run an incredible 10 half marathons quicker than 67:00.

Winning the battle of the Brits, Steel ran her fastest half since 2015. The Charnwood AC athlete was second with 68:13 in the Great North Run in 2014 – the year in which she took the European cross-country title. However, after stalling plans to move up to the marathon, her run here showed a return towards something like that best form which had been missing in 2017.

Just a month after her making a name for herself by leading for much of the World Championships marathon, local athlete Dixon had plenty of support on the route. She had initially planned this as a training run but then decided a personal best might be a target, although she was eventually nearly two minutes outside.

In the wheelchair race, Switzerland’s Manuela Schar smashed the course record with 48:44. Adding to her wins this year in the Boston and London marathon, the multiple IPC European track champion was one minute three seconds inside the old course best.

The time was inside the world record for a loop course but will not be recognised as a new mark. Britain’s Sammi Kinghorn was 4:04 behind in second on her debut at the distance.