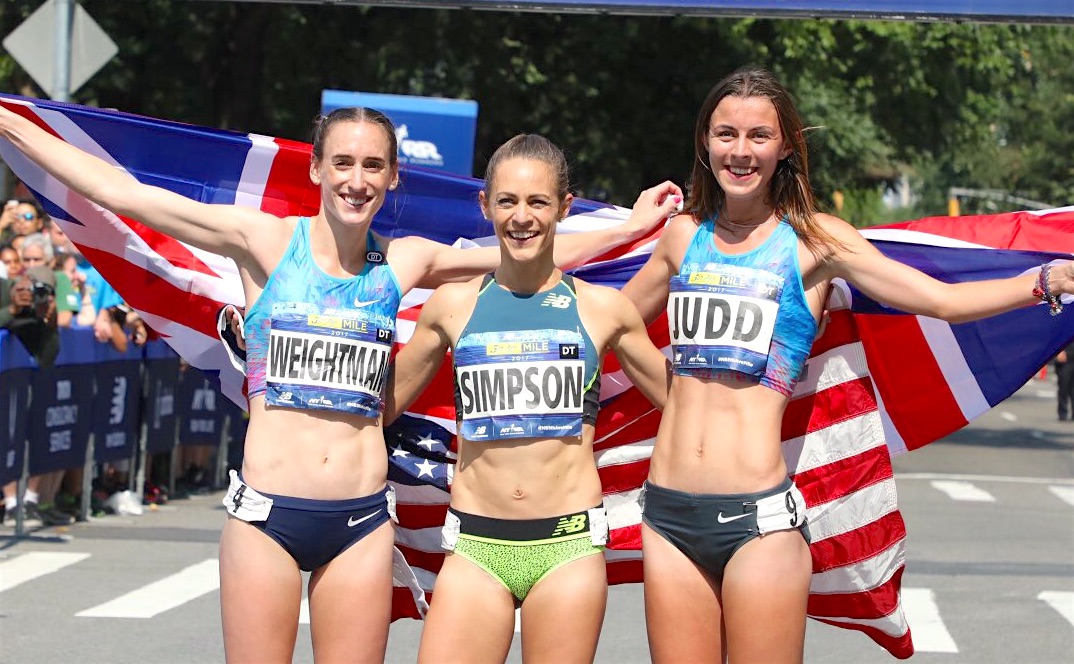 Simpson lived up to the favourite’s tag, but it wasn’t all straightforward for the world 1500m silver medalist, with Britain’s Weightman and Judd running outstanding races to push her all the way, before Simpson nudged ahead to clinch the win in 4:16.60, matching the official course record set by PattiSue Plumer (4:16.68) in 1990.

“I thought the course record would have been out of reach for my whole career, so I’m really proud to have equalled it,” Simpson said.

Weightman took second in 4:17.62 ahead of Judd to break the British mile record on the road. The previous record of 4:18.4 belonged to Laura Muir and was set last year racing down the same New York Avenue.

Olympian Weightman, who earlier this year ran a 4:20.88 mile on the track behind Simpson at the Anniversary Games in London, rounds off an impressive season following her sixth place finish in the 1500m at the World Championships.

Simpson’s 5th Avenue Mile record win and Weightman’s British record may not have been possible if it was not for the early front running by the impressive 22-year-old Judd.

Judd, who won 5000m bronze at World University Games last month, led early on in the world’s largest and longest road mile race and was still in front with 400m to go before the strength of Simpson and Weightman told as they pulled away over the final 200m. Judd crossed the line for third in 4:18.27, posting a huge personal best.

Judd moves up to the second on the British all time list, ahead of Laura Muir by one hundredth of a second.

Brenda Marinez, second at the Hoka One One Mile earlier this week finished fourth, after a late surge to move ahead of Britain’s Eilish McColgan.

Nick Willis got the better off Britain’s Chris O’Hare in the men’s race to win a fourth 5th Avenue Mile title. Willis who always saves his best for this race was pipped by O’Hare to the David Torrence cup at the Long Island Mile midweek.

In third was American Ben Blankenship with 3:52.30, while Britain’s Jake Wightman, the Emsley Carr mile champion, was eighth in 3:52.90.

O’Hare’s time sees him hold onto second on the British all time list for the road mile, with Wightman now third.