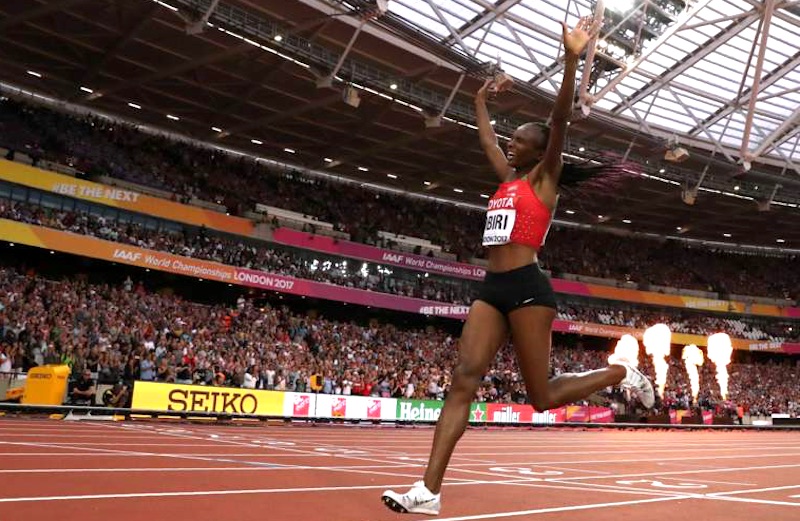 Keyna’s Hellen Obiri tore Almaz Ayana to pieces on the last lap to clinch gold in the 5,000m at the World Championships in London, while Laura Muir battled bravely for sixth place.

The race started with a pedestrian 81-second opening lap and with the next two laps almost as slow, it was time to move for 10,000m world champion Ayana and Olympic silver medalist Obiri.

Ayana led the charge with world leader Obiri tracking close behind, the pair going on to devastate the field in one lap.

With the African pair in a race of their own for gold and silver, it became a thirteen-woman fight for bronze, wth Netherland’s Sifan Hassan leading the pack.

Ayana had failed to shake Obiri and as the bell rang for the final lap it was the Kenyan who kicked with a superb piece of running. In the blink of an eye Obiri built up a 30m gap ahead of her rival, with Ayana unable to answer as Obiri clinched gold clocking 14:34:86.

It was amazing demonstration of distance running from the new world champion as she covered the last kilometre in 2 minutes 45 seconds and the final 400m in just 60 seconds.

In her first major 5,000m, Britain’s Laura Muir finished a very credible sixth adding to her fourth place over 1,500m

Compatriot Eilish McColgan finished in tenth place among a strong field in 15:00.43.

In the women’s 800m Caster Semenya won her third world title, finishing ahead of Francine Niyonsaba of Burundi, with the Olympic champion clocking 1:55.16. It was a world leading time and a new personal best for the South African star.