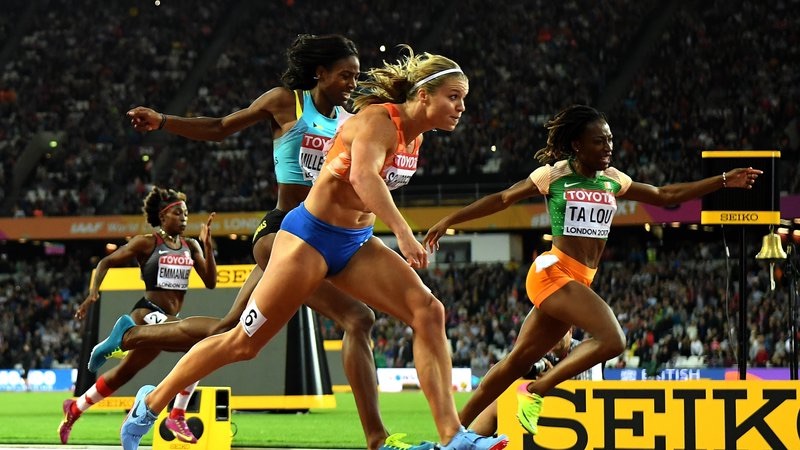 Dafne Schippers started brilliantly firing round the bend with Marie-Josee Ta Lou not giving an inch. As they came down home straight level the defending champion just pipped the Ivorian star to seal her second 200m world title, crossing the line 0.03 ahead of Ta Lou in 22.05.

The 200m gold brings the Dutch star’s medal haul to two at this World Championships adding to her 100m bronze from Sunday.

While Ta Lou, made it an impressive two silver medals at this year’s championships, coming ever so close to gold on both occasions, with the Ivorian’s 200m final time 22.08 a new national record.

Schippers, the Olympic silver medalist said: “It was very important to win, I’ve worked so hard and last year was not the easiest for me. I changed everything and got a new coach, so I’m very happy.

“It’s great, especially with the gold medal. My secret is enjoying the sport and enjoying my racing. I feel a little bit nervous starting out, but I’m a final runner and I’m grateful for the experience now it’s over.”

To finish seven hundredths of a second of a medal after a foot break earlier this year, more than shows that Britain’s fastest woman is back to her best.

Asher-Smith said: “I’m frustrated, but quite happy to have run like that having broken my foot this year.

“I was so happy to be here and just told myself to go out fast.

“The crowd were getting louder and louder so I knew I was doing well, and I kept going for it.”

It was a shock US one-two in the women’s 3000m steeplechase final.

Coburn won the race with a superb water jump, sprinting to cross the line in 9:02.58, also setting an American and championship record in the process.

The 26-year-old is the first American to win gold in a global steeplechase championship since 1952.

Frerichs’s silver medal time of 9:03.77 was a personal best for the 24-year-old American.