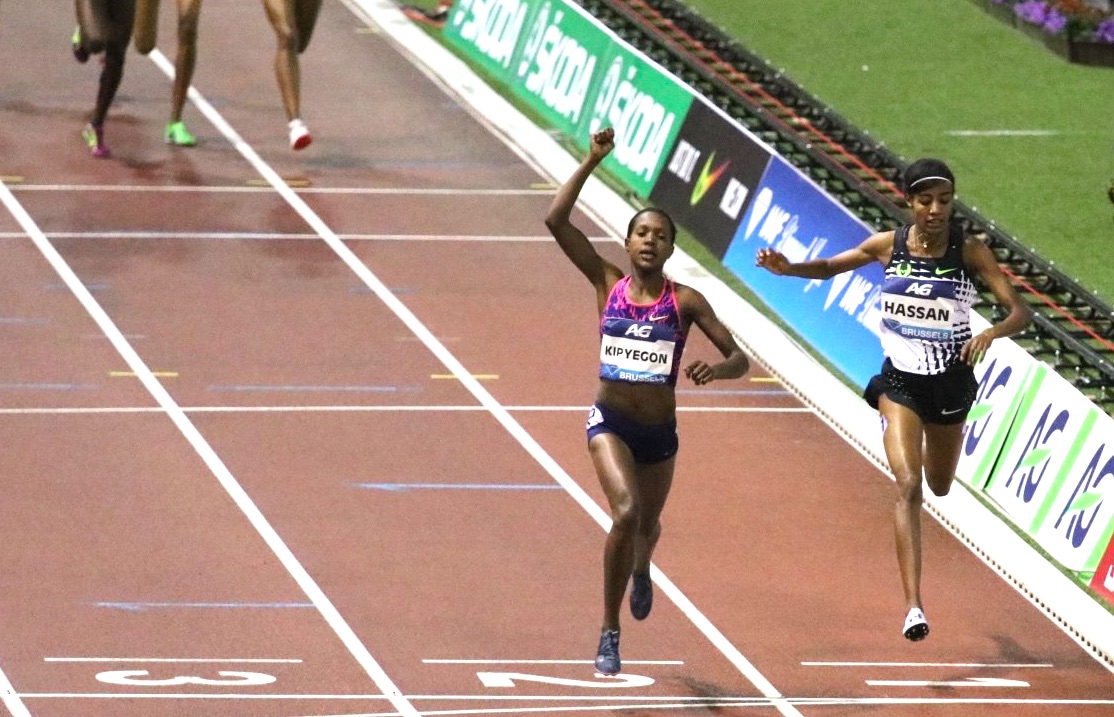 Faith Kipyegon and Elaine Thompson clinched Diamond League titles on a night of exciting head-to-heads, while Eilish McColgan broke the Scottish 5000m record at the Diamond League in Brussels.

In the final Diamond League meet of the season, world and Olympic champion Faith Kipyegon, held off the world leader Sifan Hassan to take the 1500m trophy.

Hassan of the Netherlands had the advantage coming off the final bend but a storming finish from Kenya’s Kipyegon down the home straight clinched the win in 3:57.04, with Hassan crossing the line in 3:57.22.

It was a season’s best for the impressive Kipyegon, with fellow Kenyan Winny Chebet finishing third in 4:00.18.

“I’m so happy to end my season this way,” said Kipyegon. “Last year I was so disappointed but now I have won the Diamond League, proving I am in good shape.”

World champion Hellen Obiri stormed to a 14:25.88 win in the 5000m, with fellow Kenyan Caroline Kipkirui running a massive personal best for second in 14:27.55.

It was another standout performance by Great Britain’s Eilish McColgan as she continued her amazing season of personal bests and records.

The 26-year-old was the first European home clocking 14:48.49 as she ran sub 15 minutes for the first time, breaking her personal best by 12 seconds.

It is a new Scottish record and puts McColgan fourth on the British all-time list behind Paula Radcliffe, Jo Pavey and Zola Budd.

It was another second place for Marie-Josee Ta Lou, as Elaine Thompson pipped the Ivorian to the 100m title by one hundredth of a second.

Ta Lou has had an excellent season, running a personal best and a national record, but must be wondering when her first major win will come after another second place finish to add to her World Championships 100m and 200m silvers.

Thompson, who won the Diamond League 200m trophy last week finishes strongly after a slow start to clinch the win in 10.92 from Ta Lou in 10.93.

The 19-year-old American, who missed out on the World Championships this year posted 20.00 for the win, with compatriot Webb second with 20.01.

It was a fantastic sprint finish from world and Olympic champion Conseslus Kipruto to clinch the steeplechase title in 8:04.73 ahead of Soufiane El Bakkali of Morocco.

After a fall on the last water jump, USA’s Evan Jager recovered strongly to third in 8:11.

Shaunae Miller-Uibo became a double Diamond League Champion, adding the 400m title to the 200m won last week in Zurich. The Bahamas athlete powered her way to a 49.46 win, a season’s best and world leading time.

After failing to win the 800m world title with the favourites tag, Nigel Amos showed his true class with a comfortable Diamond League win over the distance,  ahead of Polish duo Marcel Lewandowski and Adam Kszczot. GB’s Elliott Giles came home in seventh running 1:47.03.

Sergey Shubenkov took the men’s 110m hurdles title with a 13.14 win, while Olympic champion Dalilah Muhammad won a competitive women’s 400m in 53.89 ahead of Zuzana Hejnova in 53.93. Britain’ss Eilidh Doyle finished a strong fourth in 55.04.