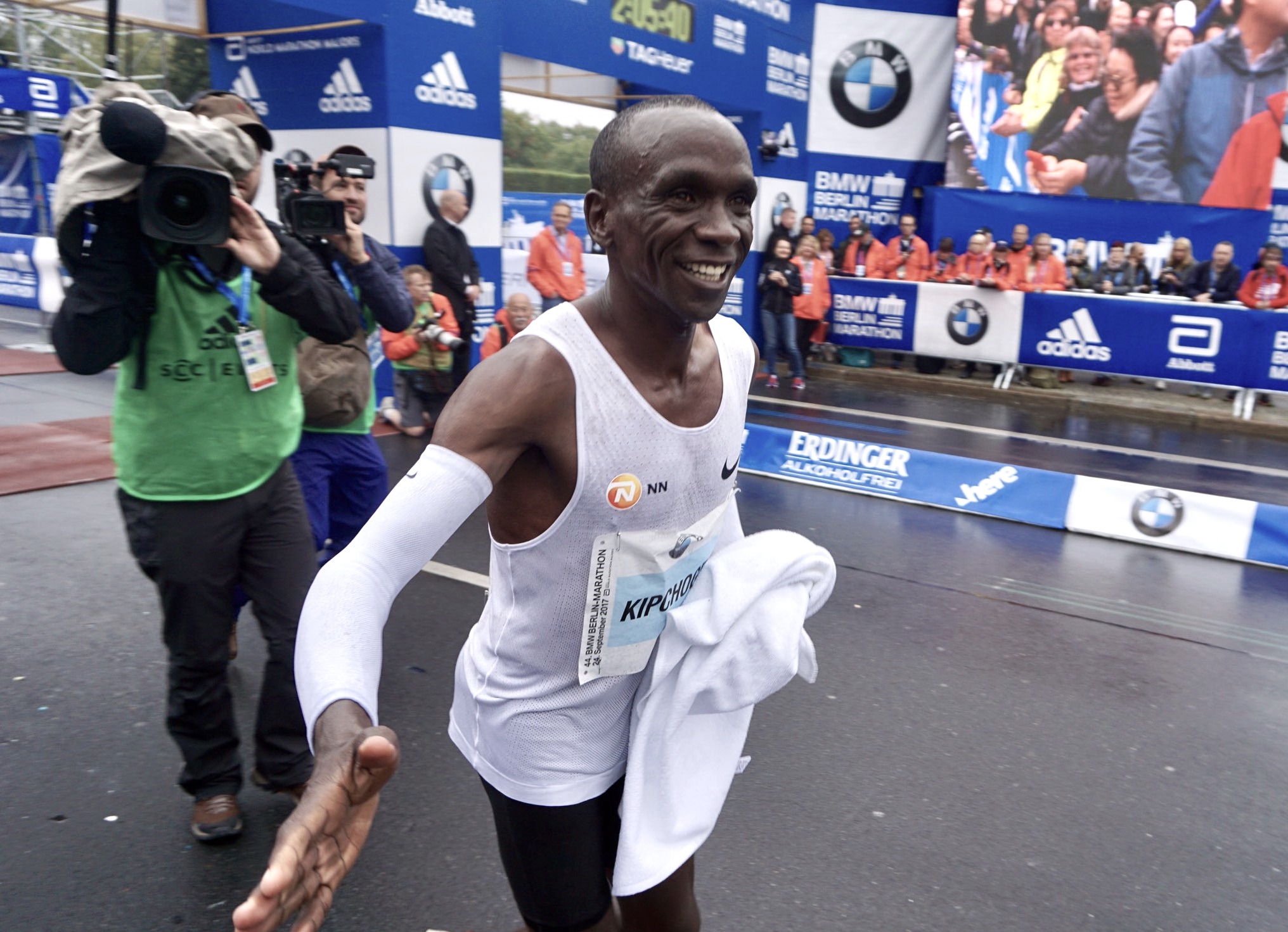 Eliud Kipchoge clinched the top podium spot at the 44th edition of the Berlin Marathon on Sunday (September 24), with Kenenisa Bekele and Wilson Kipsang failing to finish.

Olympic champion Kipoogue missed out in his world record efforts, with the uncooperative weather a major factor, but the 32-year-old still crossed the line with a smile to claim his second Berlin Marathon title.

Kipoogue’s winning time of 2:03:32, was 35 seconds outside Dennis Kimmetto’s world record of 2:02:57, but marathon newcomer Guye Adola gave him a race with a fantastic performance to finish second. The 26-year-old surprised everyone to clock 2:03:46 for the fastest recorded marathon debut, bettering Ayele Abshero 2:04:23 time from 2012.

With the pace slightly dropping by 15kn with the leading pack drifted somewhat outside world record pace in 43:44. The wet roads and high humidity that greeted the runners this morning was always going to leave any world record attempt in jeopardy, and perhaps the questioned three-day window for the Breaking2 attempt in Monza was not such a bad idea at all.

At the halfway point the lead men posted 1:01:29, slower than the 1:00:45 requested by Kipchoge, but still on world record pace, but at 22km the uncomfortable looking Bekele dropped back from the lead pack deciding to run his own race and by 23km the gap had grown even more.

Adola, Kipchoge, Kipsang, and Kipruto posted 1:12:50 at the 25km split and were still within the world record after running a faster 5km split of 14:32, but Bekele was somewhat adrift 21 seconds behind. By the 30k mark, the marathon was turned upside down when 35-year-old Kipsang suddenly dropped out suffering from some form of stomach distress.

This left marathon debutant Adola and Kipchoge the sole contenders for the Berlin Marathon title as they went through the 30km spilt at 1:27:34, still on world record pace. At some point between the 35km and 40km mark, Bekele, unfortunately, joined Kipsang on the DNF list.

With 5km to go the Adola kicked opening up a gap ahead of the experienced Kipchoge, but the Olympic champion didn’t panic and stayed relaxed before regained the lead with 2km to go.

As Kipchoge and Adola approached the iconic Brandenburg Gate, a sizeable gap separated the pair and as the finish line came within view Kipchoge powered home to take the top honours in the German capital clocking 2:03:32, the eighth win in his last nine marathons.

“I am happy to win. But the conditions were really not friendly and I was happy to run 2:03 in these conditions,” said Kipchoge afterwards.

Although there was no world record, it was a thrilling finish with the fantastic performance from marathon debutant Adola in second posting a time of 2:03:47. Finishing third was Ethiopia’s Mosinet Geremew with 2:06:12.

Jonny Mellor was the first British finisher, running a massive personal best in 2:12:57, bettering his previous best by almost four minutes, while Sonia Samuels was the fastest British woman in Berlin clocking 2:29:34.

Irish Olympian Kevin Seaward posted 2:15:50 to clinch the Commonwealth Games standard, while Laura Graham missed out on the standard by five seconds, clocking 2:37:05, but still a huge personal best run.