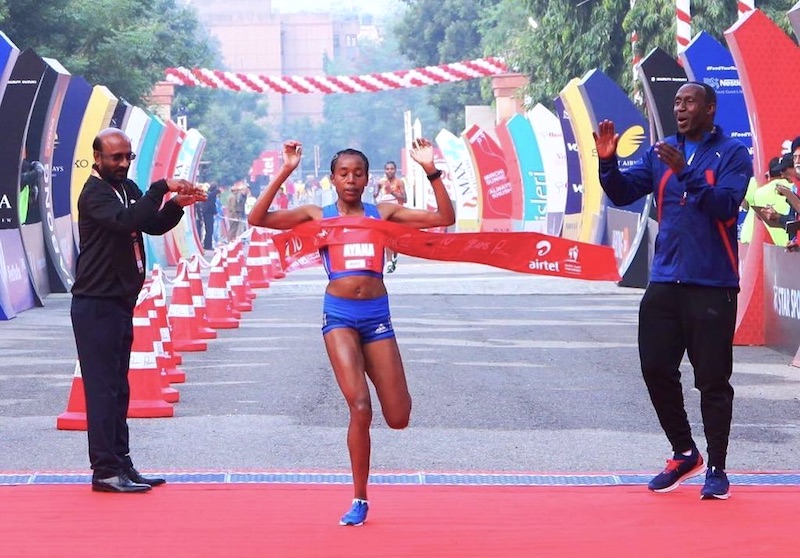 Almaz Ayana in her debut over 13.1 miles and Berhanu Legese won the Delhi Half Marathon on Sunday (November 19).

Ayana, the 10,000m Olympic and world champion clocked 67:11 to take the win in her maiden half marathon.

The current women’s world record of 64:51 was set by Joyciline Jepkosgei in October at the Valencia Half Marathon.

No world records have fallen at the level of the women’s half marathon in recent years. With Ayana’s impressive debut on an unfavourable record-breaking course, few will be surprised if she comes closer in next outing.

Ababel Yeshaneh and Netsanet Gudeta completed an Ethiopian podium with 67:19 and 67:24 respectively for second and third.

Ethiopian compatriot Andamlak Belihu was five second behind clocking 59:51 for second, while Leonard Korir of United States was third in 59:52.

Approximately 35,000 runners turned out for the various events despite calls from health officials in Dehli to postpone or cancel the event due to rising pollution levels in the city.

Linford Christie was a surprise attendee at the event and was on hand for the winners crossing the line. Prior to Sunday’s race, the 1992 100m Olympic champion encouraged people to come out and run at the event.

“What’s important is to get people out. What they do otherwise sitting at home. Sit at home and vegetate,” said Christie.