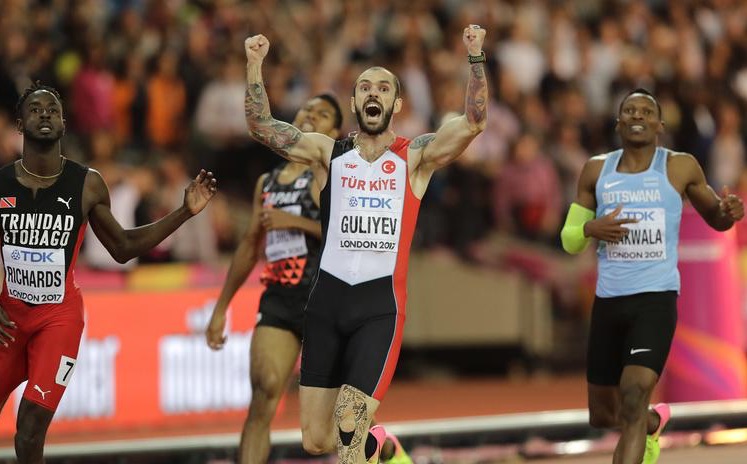 With no Usain Bolt, Andre De Grasse or Justin Gatlin, the 200m world title was up for grabs. After a quick start and as the field came off the bend any of six could have won, but it was Turkey’s Ramil Guliyev who had the strength over the final stretch to clinch the win in 20.09, ahead of South Africa’s Wayde van Niekerk in 20.11, with Jereem Richards of Trinidad and Tobago taking bronze in 20.11.

It was Turkey’s first gold medal at a World Championships, but Guliyev, who was born in Azerbaijan celebrated his gold medal with both Azerbaijani and Turkish flags.

After his 400m gold earlier this week, Van Niekerk was denied a gold double, but after struggling yesterday in the semi-finals, the 400m record holder was pleased to have found something between yesterday and today to take the silver.

After making a great start, fan favourite Iaasc Makwala had to settle for sixth, with this week’s fatigue clearly taking a tole on the Botswanan.

In the women’s 400m hurdles final it was a USA one and two.

25-year-old Kori Carter went out hard from lane nine and didn’t look like she would loss after her start. Compatriot and Olympic champion Dalilah Muhammad tried her utmost to close the gap, and at one stage looked like she might, but just couldn’t muster enough, settling for silver in 53.50.

Carter won in 53.07, and Jamaica’s Ristananna Tracey takes bronze with a personal best 53.74.