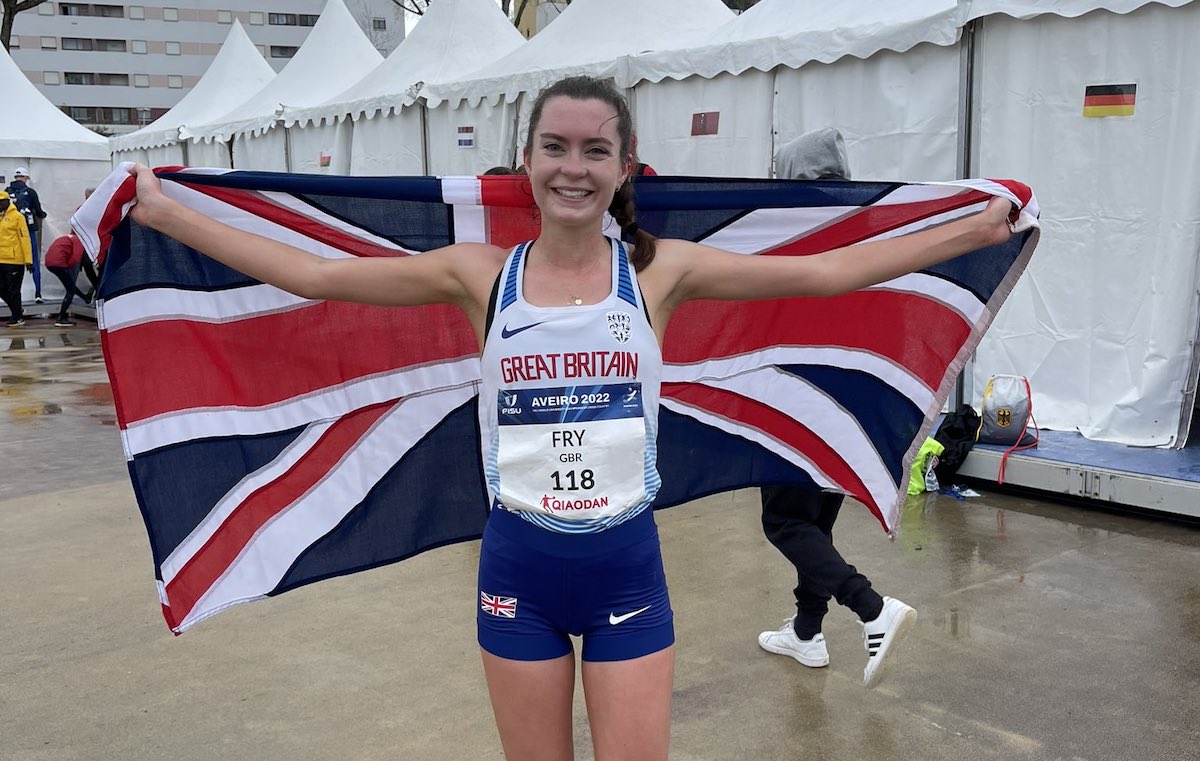 It was a brilliant weekend for British cross country running of all ages, both at home and abroad. Izzy Fry (31:52) and Saskia Millard (32:01) won Gold and Silver for GB at the 2022 FISU  World University Championship  Cross Country  in Aveiro, Portugal. Turkey’s Yayla Gunen was third in 32:14. The mixed relay team of Alexandra Millard, Edward Potter, Sabrina Sinha and Justin Davies also took Silver.

GB Student teams out in Portugal about to check out the course. Men, women and relays teams. pic.twitter.com/OrWSJfYUJA

For the men, Calum Johnson who runs for the North East, left the result in no doubt claiming gold in 33:03 ahead of Hampshire’s Zakariya Mahamed in 33:24 and Daniel Haworth of Derbyshire in 33:34. There was no defending champion to battle as Mahamed Mahamed was not present after winning the Nationals the other weekend.

Here’s how it went down in Loughborough, including the Inter Counties Cross Country Championships ⤵️

While all that was going on, the Mid Lancs League XC were also in action at Leigh Sports Village. Matthew Briggs of Lancaster University won in 31:41 ahead of V40, Chris Livesey (Preston Harriers) who clocked 32:08 and V45, Gary Shaw (Burnley AC) who ran 33:07. In the team results, Preston Harriers were well clear at the top of the table.

Dulwich’s Ed Chuck (28:44) and Blackheath’s Andrea Clement (24:49) made their master’s debuts in fine style, winning the British Masters Cross Country Championships in Tonbridge. The course was a 6km route for all Women and Men 65+, while the M35-M60 tackled 8k. Full results here.

More veteran runners were in action in Yorkshire where the YVAA XC Champs resulted in a win overall for Scott Hinchcliffe (V35 – 34:03) and Katie Walshaw  (37:45) who both covered 9.9k. Bingley Harriers topped the team table.

A Bit More Than XC

A special mention has to go to Jasmin Paris who took off-road to the next level this week as she tackled the incomparably brutal Barkley Marathons. Paris finished loop 3 in 39:49:56 to complete the ‘Fun Run’. She was the last woman standing, but not quite under the 36 hour mark required to be allowed out for loop 4.

Emilie Cairess led home a strong field of British men at Ghent Half Marathon finishing 5th in 61:16 a 41 second improvement on his previous best. Paulos Surafel ran a huge PB running 61:51 to finish 8th after passing through 10k in 28:30, well inside his previous best. Phil Sesemann was also in action running 63:32.

Jack Rowe clocked 28:23 to finish 3rd over 10km in Berlin, but we are still trying to locate others results from the race.

The hardest fought and fastest overall race this weekend must surely be the Barrowford Podium 5k where Alfie Manthorpe of Sheffield AC donned the required vest and shoes to break the tape in a six second PB of 14:09. David Mullarkey (Leeds City AC) was hot on his heels, taking second in 14:10 – a nine second PB. Keeping the top three all within three seconds of each other, Richard Allen (Leeds City AC) finished in 14:11. In all, 32 men ran under 15 minutes.

The fastest female time of the night came not from the B race, but the C – where Megan Davies ran 16 minutes on the nose. That looks to be a huge 34 second PB for the Sale Harriers athlete and put her 6th overall within her race. The next two fastest times did come from the B race where a dual between Eleanor Bolton and Steph Pennycook ended with Bolton just ending it in 16:05, leaving Pennycook one second behind her.

Not to be outdone though, the Paddock Wood Half Marathon was also host to a swift field. Highgate’s Alex Lepretre who hasn’t raced a half since 2014 so a PB was fairly likely, but a win in 64:38 tops that by a long way! Nicholas Torry of Serpentine RC was next home in 66:14, followed in by John Sanderson (G&G AC) in 66:42.

Chloe Richardson (RAF AC) obliterated her personal best too, running 73:47 to win the women’s race. Laura Smith (Hallamshire) was runner up in 76:02 and third went to Helen Gaunt (Tonbridge) in 77:46.

The Rest of the Roads

Cheshire Dragons’ Joanna Marsden brought home a local victory at the Chester 10k, crossing the line in 36:54. Runner up Jordan Foster, who was testing her legs ahead of Manchester Marathon, finished exactly two minutes later and Charlotte Towers took third in 39:17. The men’s 1-2 was a bit tighter, with Daniel Jarvis winning out in 30:41 and Elisha de Mello right behind in 30:54. Ben Taylor was third in 33:18.

Weston Prom 5 continued their monthly series on Thursday night and Ben Robinson left no doubt of his victory, running 25:46. Kelly Dicks was similarly convincing with her winning time of 29:54,

The other race in the RunThrough calendar on Saturday was the Tatton 10k which saw a tight top-three in the men’s race as Jonathan Smith (36:05), Steven Marriott (36:12) and Adam Tyson (36:28) all finished within 23 seconds of each other. Two of the top females ran under 40 minutes, with Hannah Brown clocking 36:29 and Lorna Young 38:16.

Sunday’s RunThrough offering took place in Victoria Park and topping the gents race in the Half Marathon was Alex Brighton who ran 74:23 while Sharon Wright was first lady in 88:56. The 10k wins went to Kevin Frances in 34:14 and Catriona Paterson in 36:26. Over 5k Ben Prior’s 16:22 was enough to secure top placing, as was Rihanon Daniels’ 19:13.

In Buxton the Pavillion Gardens 5k saw Lucas Parker race home in 16:40 as fastest man and Lucy Wheelan fastest woman in a time of 23:22.

In Thirsk 10 miles was also the challenge and it was Rob Scott who raced home first in 52:05 and Helen Cross who ran a storming 60:30 for first woman.

Stepping it up a bit on the distance, the Oundle 20, now in its fifth year saw Richard Gibbs the only man to dip under two hours, running 1:57:40 for first place. Lucie Custance ran 2:21:07 for first female, holding off Claire Fitzpatrick who clocked 2:21:33

With nearly a minute to spare, Aaron Scott won the Burghley 7 in 37:21 and Hannah Rounds was first woman home in 45:39.

Last but definitely not least, it would be remiss of me not to mention Kenya’s Ruth Chepngetich who ran 2:17:18 to win the Nagoya Marathon. That time is the second-fastest ever women-only marathon and she ran it in a negative split of 1:09:03 and the second in 1:08:15. GB’s Charlotte Purdue was on pacing duties as she prepares for the World Championships in Oregon later this year.