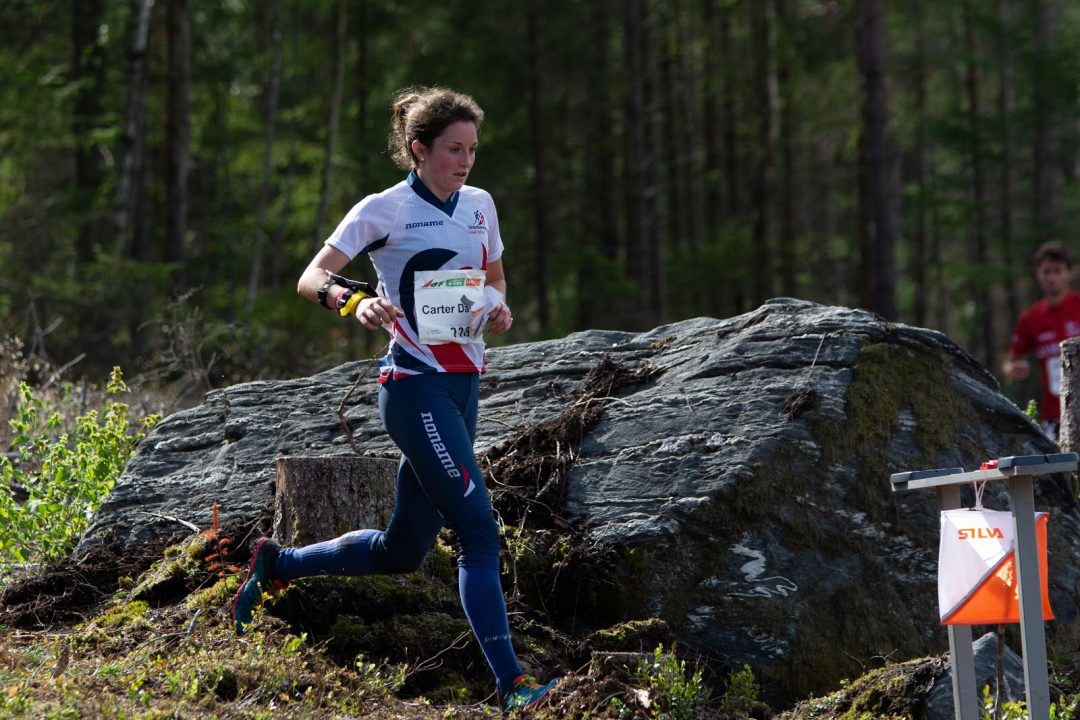 Saturday saw the culmination of the 2019 World Orienteering Championships, which have been taking place in Østfold, Norway, over the last week. Kris Jones reports for Fast Running.

If you want to know a little more about orienteering and all the fast running involved, then check out GB International Kris Jone’s post from earlier in the year.

The first edition of a ‘split’ world championships (‘Forest’ and ‘Urban’ schedules now alternate years) saw athletes compete for medals in Long distance, Middle distance and Relay races over the course of 4 days.

The terrain facing the athletes was typical nordic forest, undulating and detailed, with a covering of heather to sap the legs of the runners.

It’s a different environment to what many of the British athletes learned to orienteer but, with some of the team based in Scandinavia in the months and years prior to the championships and training camps spent in nearby forests, the British athletes will have hoped to be able to compete for top placings.

The host nation, Norway, would supply many of the favourites but there would also be stiff competition from neighboring Sweden and orienteering powerhouse, Switzerland.

Tuesday saw a middle distance qualifier, with each nation allowed three start spots and the fastest 15 from three heats making it through to Friday’s final. One of the shocks of the day was Norway’s Paul Sirum missing out on a spot in the final. Five of Great Britain’s six athletes made it through, Oslo based Yorkshireman Matt Speake narrowly missing out. Wednesday saw the first of the weeks medals handed out in the Long distance races. The women faced an 11.7 km course with 300 m of climb and 21 control points and the men 16.6 km with 530 m of climb and 26 controls. If these distances sound short, remember that this is true cross country running; athletes may not set foot on a path for the whole race, preferring to take the shortest route between the control points.

The Long and Middle distance races both use a time-trial start so that competitors have to face the navigation challenges alone. In the women’s distance race, Tove Alexandersson of Sweden was the class of the field, taking the victory by over six minutes.

Tove was easily one of the favourites for the race, having won seven World Championships gold medals over the past three years. She is also a classy runner without a map; she is the reigning Sky Running World Champion. Tove used this running speed to outpace her competition on the two longest legs of the course, opening up an unassailable gap on her competitors. Lina Strand of Sweden and Simona Aebersold of Switzerland completed the podium.

Great Britain’s two representatives (nations are provided starting slots for the long distance on the basis of nation rankings) were Jo Shepherd, in 21st position, and Charlotte Watson (@WatsonCharlott), in 36th position. The favourite also prevailed in the men’s long distance; Olav Lundanes won his first Long distance title in Norway in 2010, and has taken four more gold medals in the years since then – including in the last three World Championships.

Whilst the winner was not a surprise, the silver medal most certainly was. Kasper Fosser, Olav’s Norwegian team mate led for most of the race before fading to second in the last third. Kasper won three gold medals at the Junior World Orienteering Championships earlier in the summer and became the youngest ever World Championships medallist.

If Olav is the King of the Long distance, Kasper has made claim to the title of Prince. Third was veteran Swiss runner Daniel Hubmann, who took his 27th World Championships medal. Great Britain’s Hector Haines (@HectorHaines) and Graham Gristwood (@GrahamGristwood) were separated by under a minute, in 20th and 21st position.

Graham was on for a top-15 result but skipped a late control in his haste to push toward the finish line. Luckily, Graham realised and corrected his mistake, but the time loss cost him positions. In comparison the long distance, which can be a battle of attrition, the middle distance is characterised by intense navigation where seconds can make the difference. Tove Alexandersson and Olav Lundanes showed no fatigue from Wednesday’s Long distance and both were victorious again in the Middle distance.

Tove didn’t replicate her dominant winning margin from the Long distance however, trading the lead with Swiss youngster Simona Aebersold throughout the course. Simona had to eventually settle for second, but will be happy to take another medal from her first senior World Championships. The bronze medal was shared between Natalia Gemperle of Russia and Venla Harju of Finland.

Great Britain’s representatives, Megan Carter Davies (@cdmegan), Jo Shepherd and Catherine Taylor, finished in 21st, 24th and 27th positions respectively. That they were separated by under a minute shows how seconds can make all the difference in a middle distance race. The men’s race was a battle between Norway and Sweden, with Norway narrowly coming out on top twice. Olav Lundanes took the Gold medal, 11 seconds ahead of Gustav Bergman of Sweden. Getting together for the relay

The relay is often the most exciting race of the week. The time-trial format of the individual races is replaced with a mass start for teams of three. Forked courses (each individual runner has slightly different courses with teams completing the same overall course by the end of the relay) mean that head to head racing is the order of the day.

Great Britain have performed above the sum of their parts in many relays over the years, fighting for the medals on many occasions in the last ten years.

Living up to the relay’s reputation for exciting racing, the Women’s race was fought right until the line. Karolin Ohlsson traded the lead with Switzerland’s Julia Jakob in the final stages and managed to win the sprint finish to take the gold medal back to Sweden. The Russian Federation took the third place ahead of home nation Norway. Great Britain’s trio of Charlotte Watson, Megan Carter Davies and Catherine Taylor came through the field in the second and third legs to a strong ninth position. Megan Carter Davies had a strong run on the second leg of the women’s relay. Photo: IOF/WOC2019

After a big pack finished together on first leg, Norway, with their double Gold medalist Olav Lundanes, and Finland got a gap early in the second leg; with Sweden the best of the chasers. Despite having a lead going into the final leg, mistakes by Norway and Finland allowed Sweden’s Gustav Bergman to come through and claim the gold medal for a Swedish double.

Caught by the chasers, Finland managed to take the silver medal just ahead of France; Norway having to settle for fifth, just 21 seconds behind the second position. Pushing too hard up a hill on led to a navigational mistake which caused Great Britain’s Peter Hodkinson to lose the leading pack on the first leg; eventually finishing in 29th place and seven minutes behind the leaders. Team mates Graham Gristwood and Ralph Street climbed through the rankings to finish 17th position. Peter Hodkinson ran the first leg of the men’s relay after a 31st position in the Middle distance. Photo: IOF/WOC2019

Kris Jones features in the ‘Fast 10: class of 2019’ and over the course of the year will share his running journey. You can follow Kris on Instagram and Twitter, while further information about the ‘class of 2019’ can be found here.